Although my interest in sub tropical gardening has always been there, it has loitered in the background, dragging its feet a little, but now all that is changing and I feel an almost Evangelical fire building up inside me as a brand new growing season approaches. The area shown above is the already - established sub tropical garden, first, in full flow in September, and second, as it is today, a shadow of its former self, denuded and bare! This area has always been the domain of my partner, and although I have enjoyed spending time in it, I have had no hand in its planning, planting or maintenance .

In autumn this year, we extended the existing subtropical garden into an additional area of the garden, and, instead of it being my partner's responsibility, we are sharing the work on this baby ! We are full of  ideas for exotic annuals to grow, as well as plans for  a skeleton of hardy planting too.

This season I will be growing lots of annuals/ fast growing perennials with an exotic feel -  Nasturtium 'Empress of India', Amaranthus Caudatus Red, Amaranthus 'Velvet Curtain', five types of Ricinus, (including the giant 'Zanzibar'), Hibiscus Hanihot, Celosia 'China Town', Cosmos 'Xanthos' (pale lemon yellow), Cactus flowered dahlias, Cerinthe, Zinnias, Canna Indica and Rudbeckia 'Cherokee'. Hopefully, these annuals/ fast growing perennials will lend a tropical feel to the new area of the garden, and we intend to plant very densely, with tall things next to a narrow path, to give the feeling , hopefully, of pushing through dense jungle. We have three tree ferns on order, which will be delivered in spring, and have already planted out some palms and grasses. There are already bamboos, Fatsia Japonicas and ferns growing there. The area of the garden is already enclosed by hedging, which makes it both sheltered and private.

The propagator is out, and after the inaugural speech and cutting of the ceremonial ribbon, it is brewing its first seeds - Cerinthe, sweet peas and Canna Indica. I have always idly wondered why Cannas are referred to as 'Indian shot', and know I know ! Those babies are made of cast iron!  Internet wisdom is to chit them with nail clippers, but when I tried it, they shot off in all directions and ricocheted around the kitchen, finally coming to rest in dark little crevices, hidden from view. I tried stabbing them, sand papering them, slicing them and swearing at them. Without success. In the end I soaked them for 48 hours and they were reasonably easy to chit after that. I hope that they are  easy to germinate and grow on.

Like many other parts of the UK and USA, we have experienced an unusually mild autumn and winter so far, with only a couple of light frosts, but this changed yesterday, with the onset of much colder weather. The downside of sub tropical gardening is that there are usually some large but tender plants which need to be protected from cold temperatures. This being so, ours suddenly needed attention, with the change of the weather.

The ideal, with this style of gardening is to use plants which are totally hardy, but have an exotic look, and there are lots to choose from. Fatsia Japonica is a good example as it has large, glossy evergreen leaves, and the plants can achieve a good height after a few years. However, the real deal plants are soon tempting, and it can easy to build up a hard core of delicate plants which will curl up their toes at a few degrees of frost. 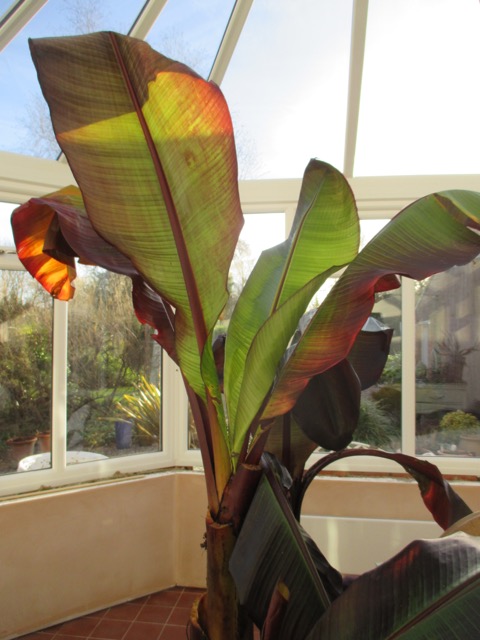 Our most tender plants live in the heated conservatory through the winter, so there are Abyssinian bananas, Agaves (which hate wet more than cold!), Begonia Luxurians and Strelizia (Bird of Paradise). The greenhouse houses the plants which can cope with a little more cold, but still need some protection, so smaller tree ferns, Aeoniums, Musa Basjoo (the hardiest banana) and Abutilon Megapotamicum are in there. Last night they had a fleece duvet to keep them warm, and they look to have fared well, with no obvious casualties. 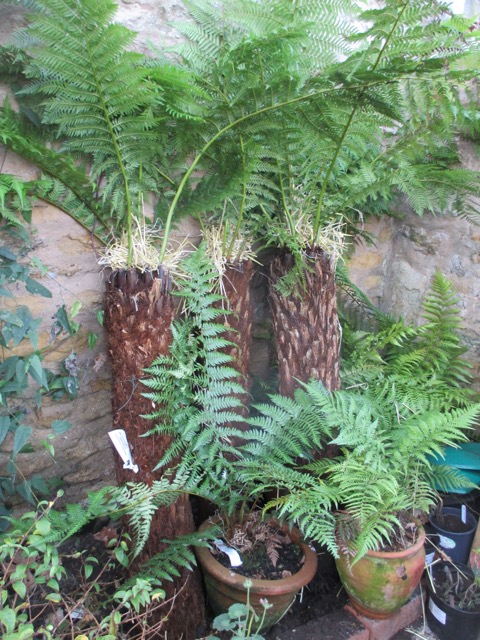 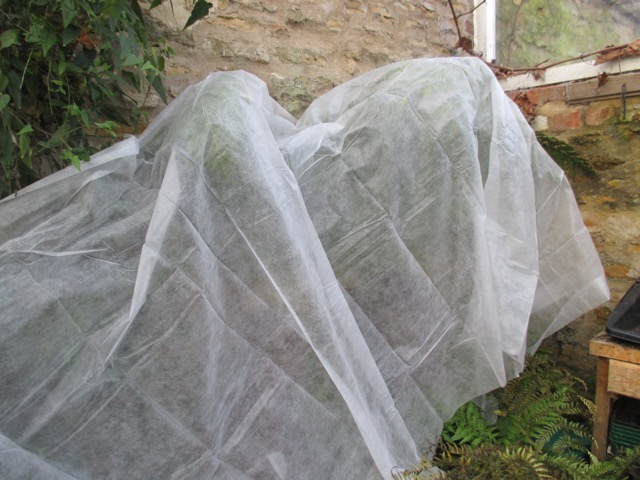 The large, tender plants in the garden have  been covered with fleece jackets, particularly palms like Phoenix Canariensis, which can take up to minus 8, when mature, without a problem. We tied up the fronds to offer more protection and slipped a fleece jacket over its head. Despite what the books say, we have lost them at much higher temperatures than minus 8. 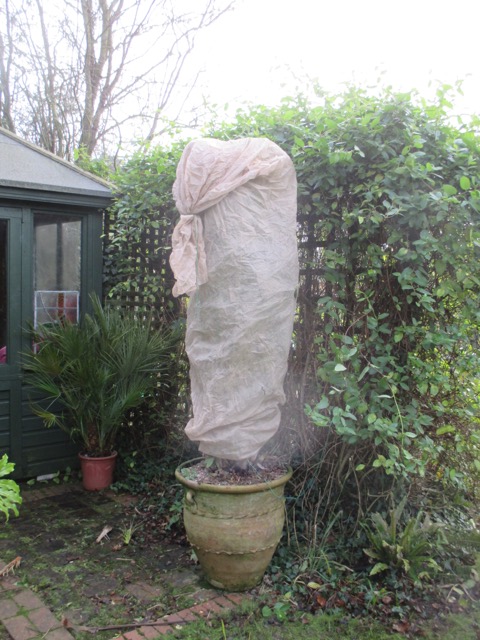 The tree ferns are sporting a jaunty cap of straw stuffed into their crowns, kept in place by aviary wire. 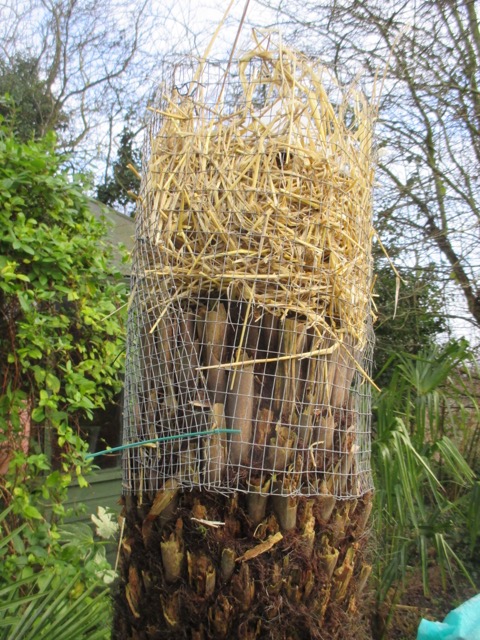 Other plants have received protection, such as the Tetrapanax, which is continuing to push out new leaves, and the gunnera crowns. These have been protected up until now by their own leaves piled on top of the crown, but they have now been replaced by fleece held down by stones.

At tis time of year, the perennials, roses and shrubs are all sleeping deeply, and require no attention, so exotic gardening (for want of a better term) can be more labour intensive. Hopefully, it is all worth it, and all the tender plants will make it unscathed through the cold temperatures.