Fifty ways to lose your begonias 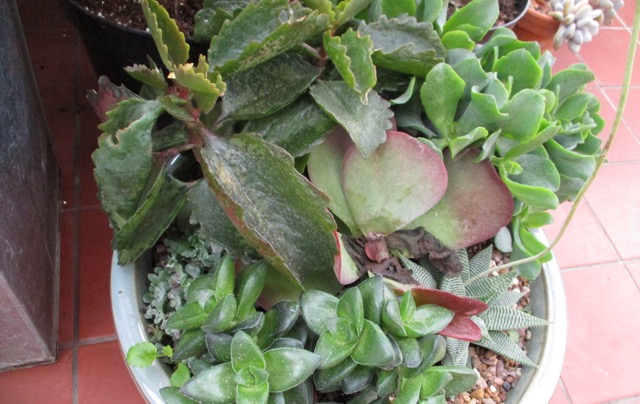 Buying tender plants at the height of summer is so easy, when the ice and snow of winter are but a dim and distant memory. It is easy to get carried away and buy far too many, far too large plants. I know. I am that person. However, once the temperature drops, they all need to be kept snug and frost free, if they are to survive until spring. I have been struggling to find the best way to do this for years, and, believe me, there have been many casualties along the way!

As an inexperienced gardener I tried the 'ostrich' approach, which meant that I stuck my head firmly in the sand and ignored all dire warnings on plant labels. I basically just left tender plants outside throughout the winter, and they died in their droves. I then progressed to wrapping them in fleece, which, although better than nothing, only gave minimal protection of a couple of degrees at most. Real divas just disregarded it and still died, although it really did help the borderline frost hardy plants. Wrapping most palms gets them through cold weather, and stuffing tree fern crowns with straw seems to do the trick, but it is finding the solution for the really tender stuff which causes the problems.

Getting a greenhouse was the first real step towards raising the survival rate of the delicate plants, but an unheated space is not necessarily frost free, as I found to my cost. Initially, I tried a paraffin heater but found it to be totally ineffective in the space, and impractical to use, as it is dependent upon you being there to light it.

The conservatory (which is heated) has been my saviour for the last ten years or so, and plants usually jostle together for space in there. It is a great solution for the plants, but not for the humans, as it virtually decommissions the conservatory from any other purpose other than that of a greenhouse for almost half of each year. 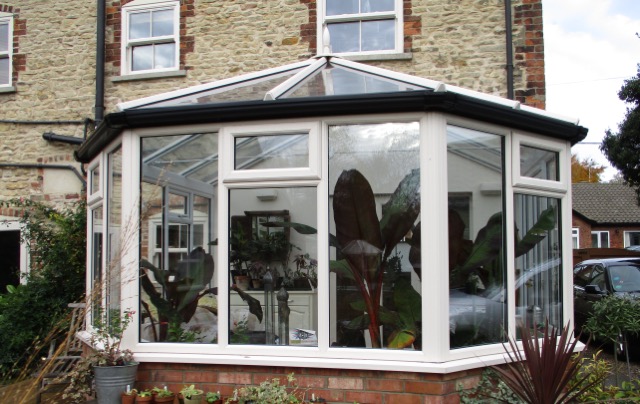 This year I decided to get the job done properly and to get electricity out to the greenhouse, so that I could have effective heating installed. Once that was in place I looked around for a good greenhouse heater, and researched online for recommendations. 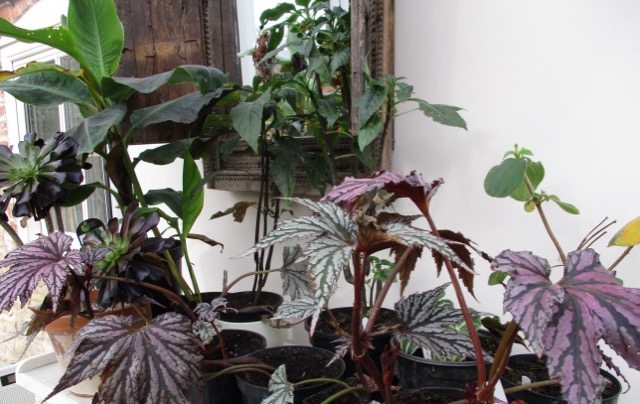 They say you have to kiss a lot of frogs before you find a prince, and, although not as enjoyable, I think the same may be true of greenhouse heaters ! I tried a 2 kw electric fan heater, first, as sold by 'Two Wests and Elliot'. Rightly or wrongly I trust them as a company, and so felt confident in buying a heater from their website. The heater, itself, was actually fine, but I hadn't done enough homework, and had bought a heater which was just too small to heat the area of the greenhouse. Big fail. 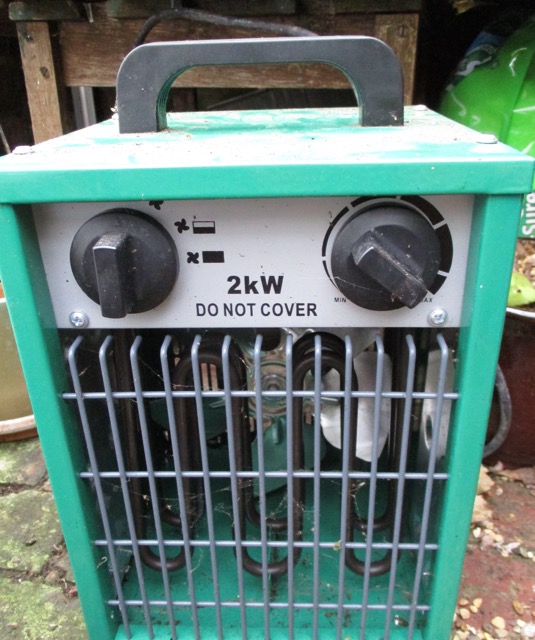 Back to the internet, and I found a beast of a thing which would do the job - a powerful electric heater capable of heating the Albert Hall. Trouble was, when I asked the advice of Jim, our electrician, he just burst out laughing  - never a good sign! To run it, he pointed out, would need a whole new armoured cable, as it was so powerful - and it would also cost a fortune to use.

Jim suggested heating tubes, which are cheap to buy and to run and could be installed on the current system. He duly installed three tube heaters, to heat the entire space, and cleverly linked them to a thermostat, so that they come on automatically when the inside temperature drops below about 6 degrees. So far they have been very effective and the temperature has not dropped below 5. 2 degrees, even though there have been some cold nights. I have a max/ min thermometer, so that I can check the range every day, and monitor it carefully. 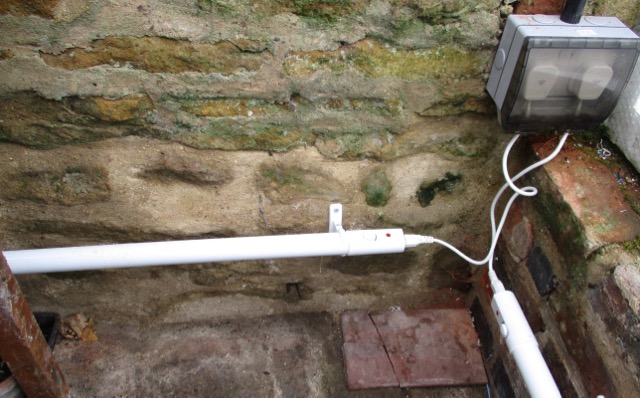 Although I know, in theory, that insulating a greenhouse makes a huge difference, it has taken several years for this fact to goad me into taking action! This year we have put up horticultural grade bubble wrap across windows and glass roof, and it makes a noticeable difference. It has to be horticultural grade to allow uv light in, I believe. 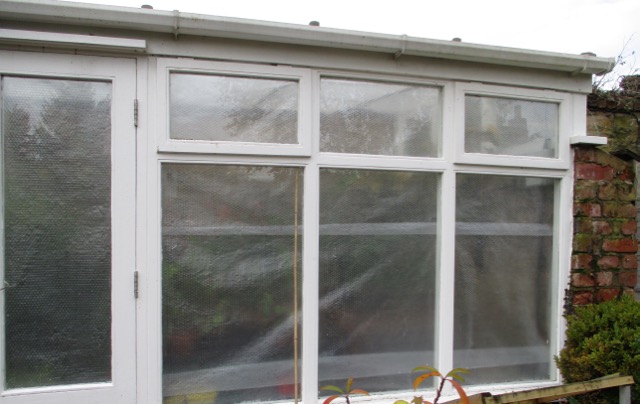 Ventilation is always an issue in a heated greenhouse, and it seems contra-intuitive to heat a space, then open a window, but moisture is the biggest danger, as it can cause mould, rot and all manner of unpleasant things. Insulation serves to hinder the free circulation of air even further, and can compound problems with moisture. 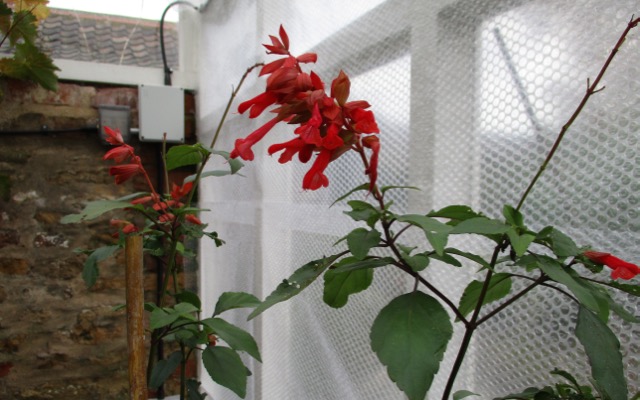 I try to open the doors when the weather is mild, to get as much air circulating as possible. Plants are checked regularly and dying flowers and foliage removed.  Everything is kept as dry as possible, as this makes a huge difference to survival rates. I barely water at all, and only give plants a little drink when they are starting to droop. 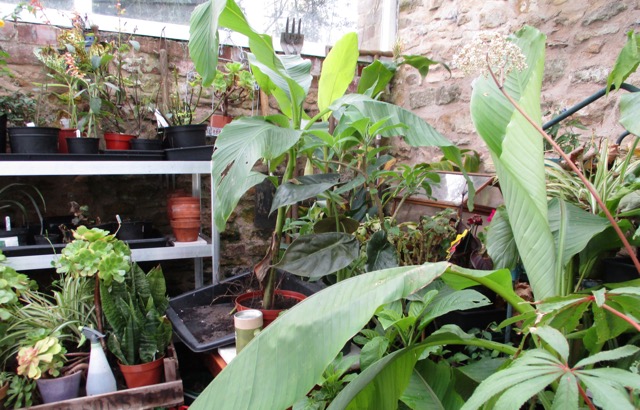 Precious things have joined us in the conservatory, and I have brought in young seedling, like Tetrapanax, and put them on the windowsill, along with cuttings of favourites such as Abutilons and salvias. In this way I hope to ensure I still keep some for next season, even if it all goes pear - shaped in the greenhouse. The big Ensete Ventricosum Maureliis are all snuggled up inside, as are some abutilons, which are still flowering. The Begonia 'Angels' have retained their foliage and still appear to be growing. 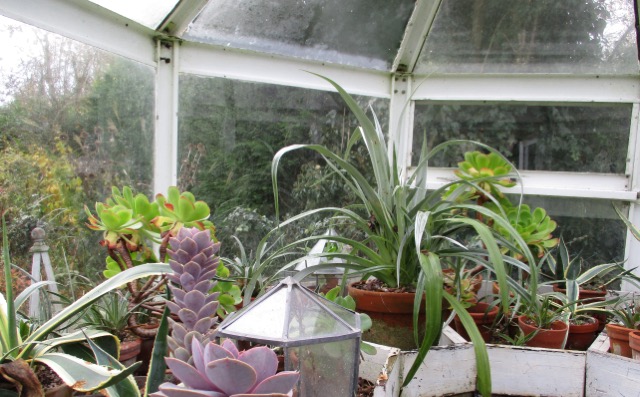 All succulents and cacti have been put into the smaller unheated greenhouse, which is kept ridiculously dry. There is an Astelia in there which has actually survived for two mild winters outside, but I don't want to chance it again. Also sheltering from the winter are agaves, aeoniums, aloes and yuccas. The theory is that they will be able to withstand the cold, as long as they are dry. If allowed to suffer the dreaded combination of wet and cold then their roots will rot, and death will surely follow. In spells of exceptionally cold weather they can be covered with horticultural fleece. 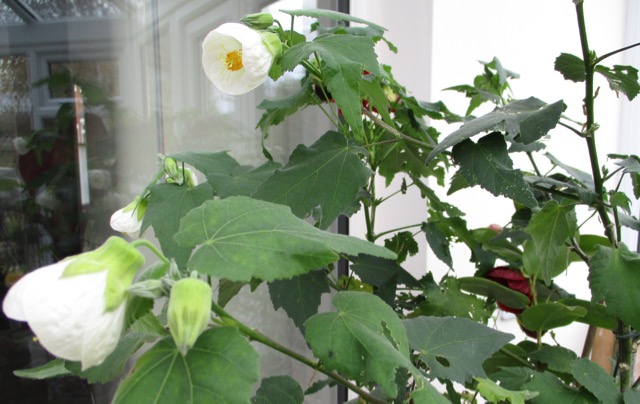 I will have to wait and see what this winter has in store for us, before I can measure the success of our new arrangements. We have already had some frosts and everything is still looking healthy.