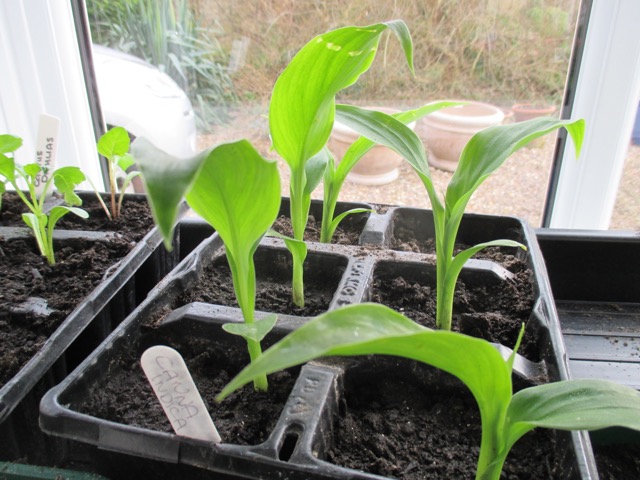 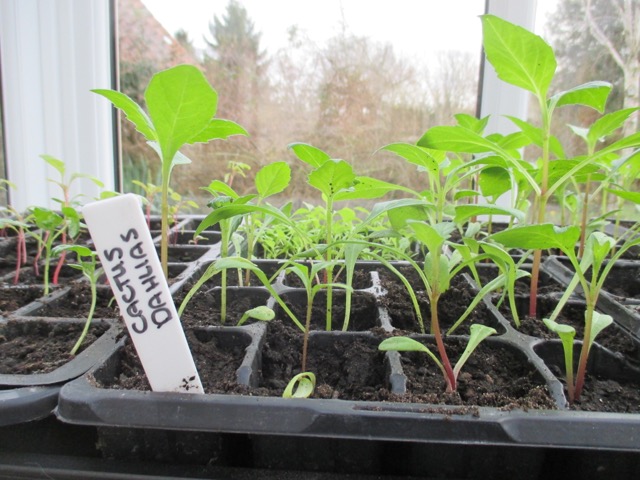 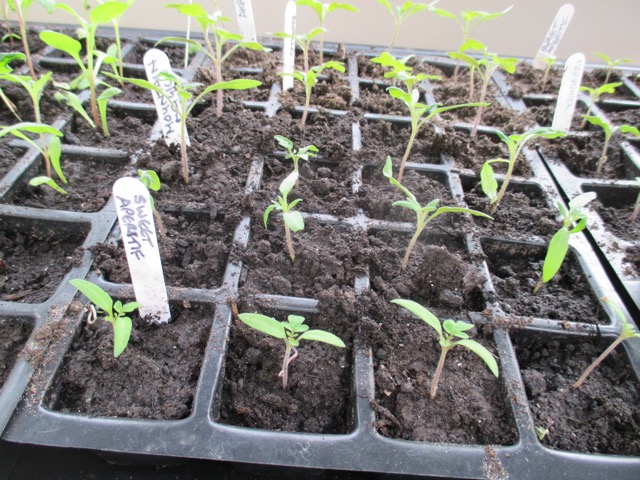 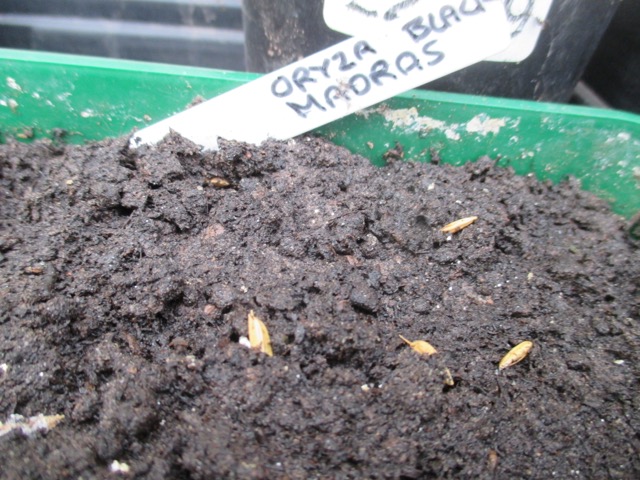 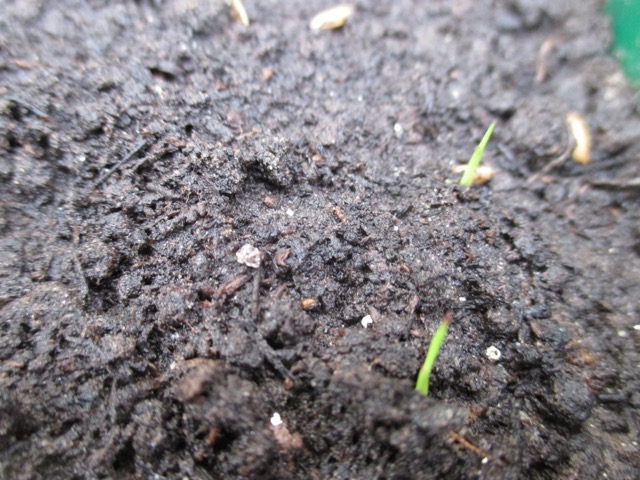 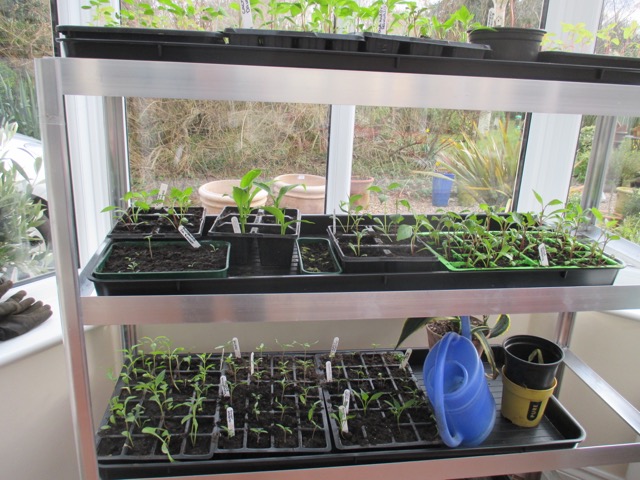 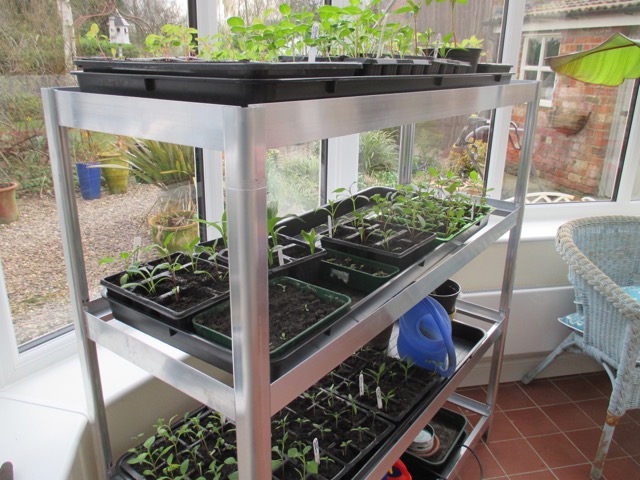 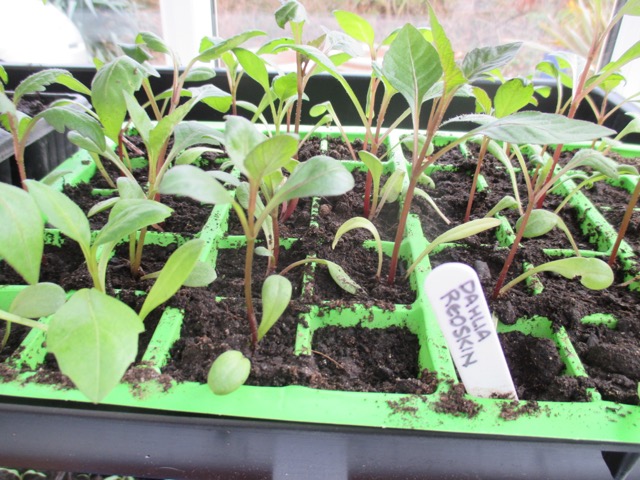 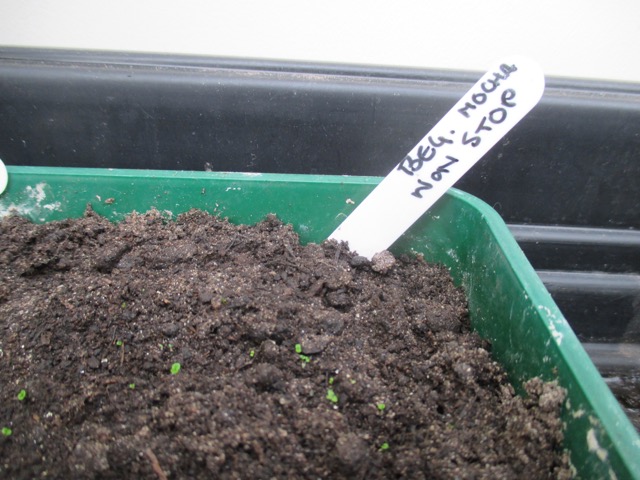 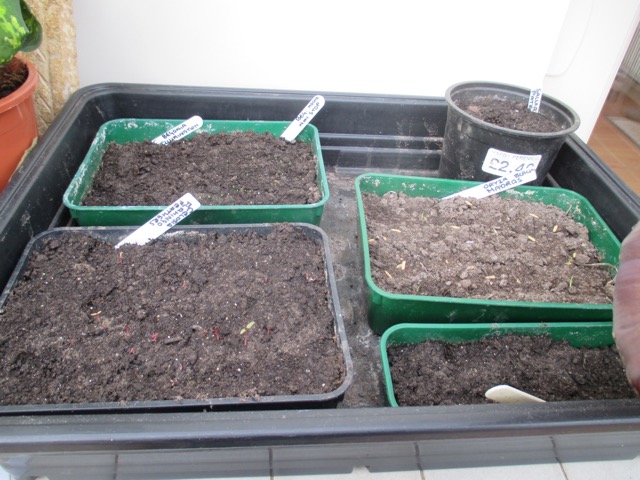 Planning for that cold, rainy day 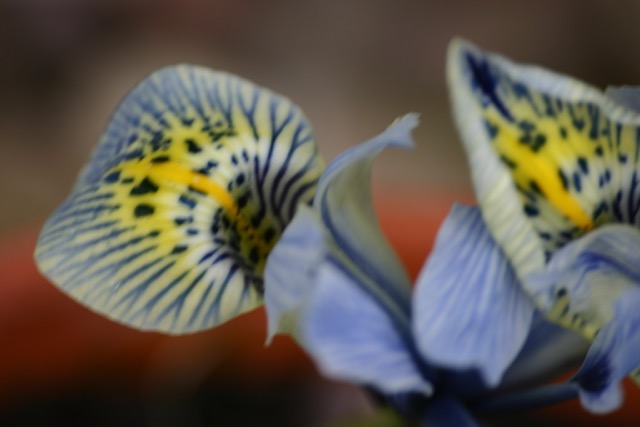 On a hot Sunday last August, I just happened to be browsing around a Garden Centre in Exeter, many miles from home. It was in the middle of a cloudburst, and the rain was drumming so loudly on the glass roof of the greenhouse that it drowned out all other sounds. I was surrounded by the lush late summer colour of Cannas and dahlias, and the season still held promise. 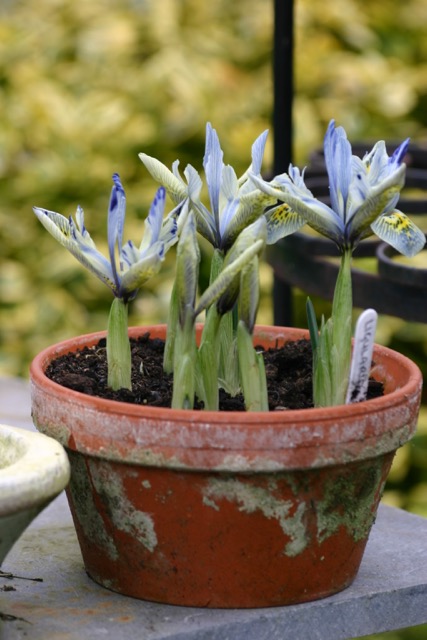 I noticed the racks of spring bulbs, and it seemed almost impossible that all the foliage and the flowers of summer would shrink back to bare earth, and that winter would leach away all the colour. 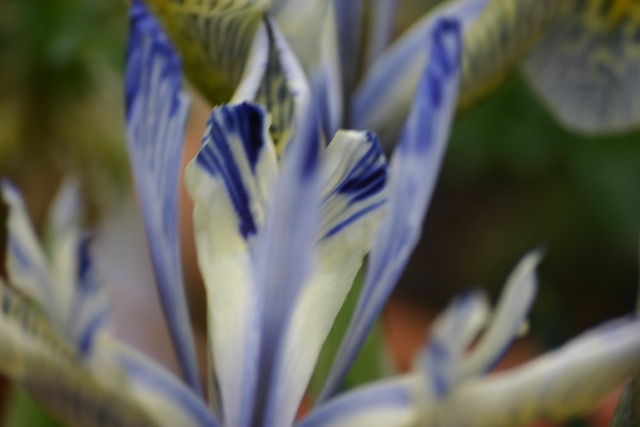 Even though it seemed almost counter - intuitive to buy dry, brown bulbs when I was surrounded by such plenty, I chose three varieties of Iris Reticulata, and then took them all the way home. 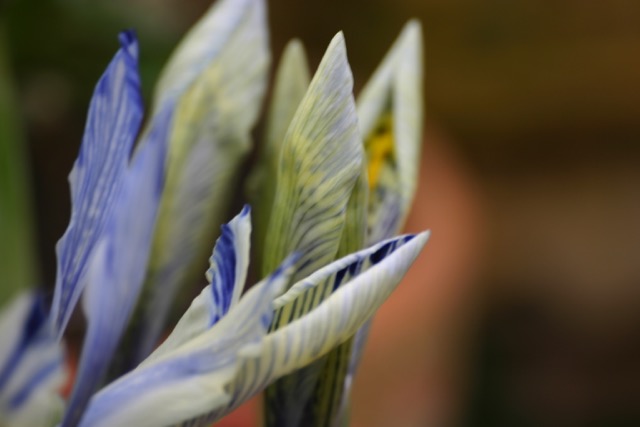 I knew I wouldn't regret it, and that one day, in the depths of winter, I would be so glad that I had thought to choose them, and plant them. 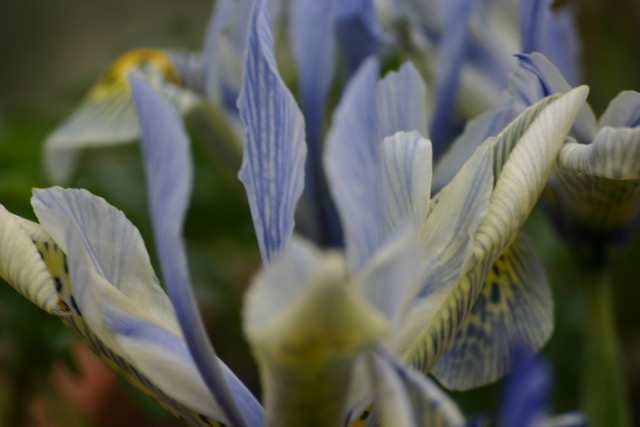 Fast forward to the bleakest part of the year - grey, cold and rainy. This was the time I was planning for ... and I was so glad to see them. 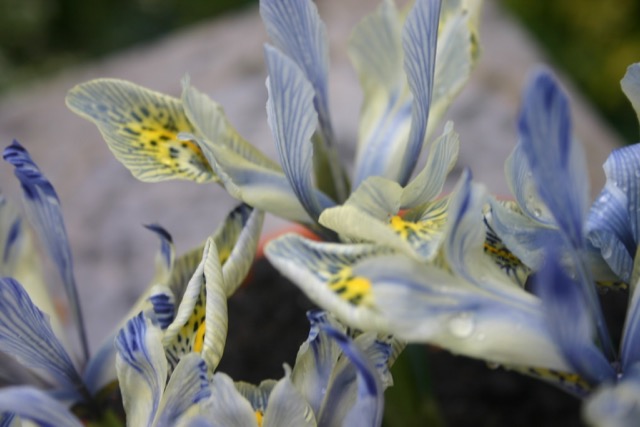 They were the promise of spring, shining through the gloom. 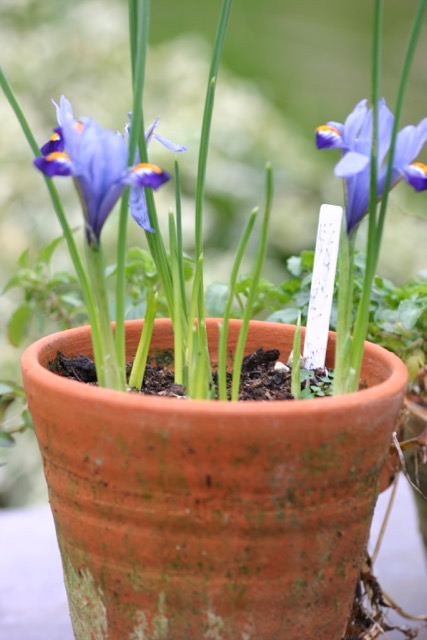 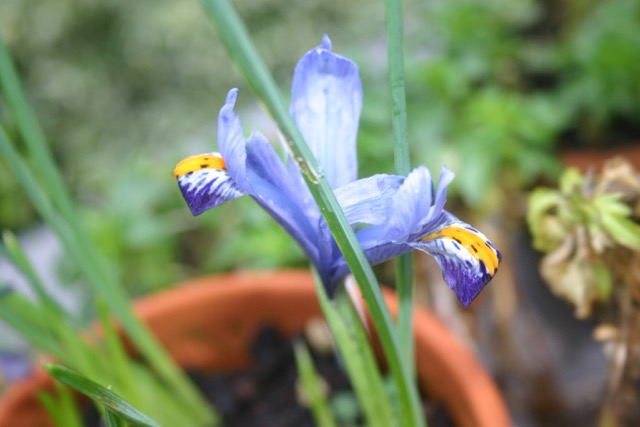 Apologies for photos, which despite three attempts and a tripod are not what I had in mind ! 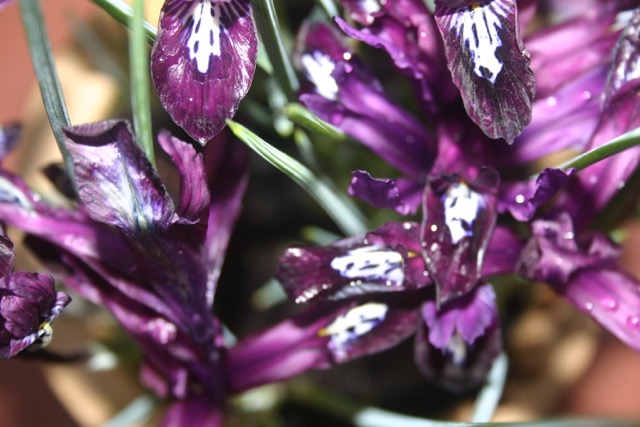 I can't seem to do justice to the depth of colour, the silkiness of the petals or the intricacies of the markings.

'Katherine Hodgekins' is the pale, cream iris, striped and mottled with blue and dotted with patches of yellow, looking almost like a Clarice Cliffe design from the Art Deco period in the 1930's. There is something pansy-like about it's markings. 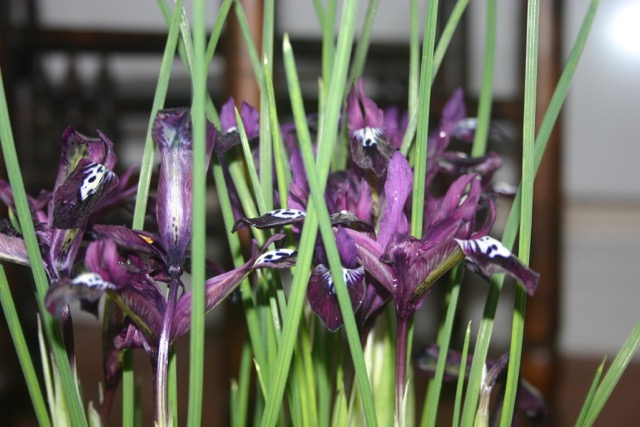 The dark, velvety iris, in the photo above, is 'George', with its mottled purple and cream petals . The colour is rich and a dark contrast to the pastel hues of 'Katherine Hodgekins'. It seems more robust than the delicate 'Katharine'.

The lilac iris with darker purple tips to the leaves is 'Gordon'.

All three have good solid names for such little powerhouses of beauty!

They are so easy to grow, that they can be forgotten about for most of the year. Although they can be grown in beds, borders and rockeries, I prefer to grow all mine in pots, so that I can get close up personal, and enjoy them! I like to move the pots next to the front door when the irises are in bud, so that I can appreciate every moment.