"And today we have naming of parts..."


As we all have language, ergo, we all have names for everything and everybody. Life would be hard, indeed, if you referred to family members as 'You - with -  the -  curly -  hair  -  standing -  by -  the  - fridge', instead of by their given names. Names may be originally derived from physical characteristics, or by ancestry, as in 'Jackson' (son of Jack), but however they are derived, we need them as linguistic shorthand, as an easy way to reference people.

There are some fantastic road names around the country, which have obviously derived from factual descriptions - 'Feather Bed Lane', 'Dog Kennel Lane' and 'Hat Case Lane' being true examples of the case in point. We need a succinct way of referencing the people, places and things in our life. So, "You know the road I mean, the one which goes past the church" becomes 'Church Street" over time.

The Exotic Gardener and I do have names for the areas in our garden, just to make life simpler, so instead of having to say "The island bed beyond the gate but before the pond" we know what we mean when we refer to the 'Silver Birch bed', as it has, you guessed it, a weeping birch centre stage. Incidentally, this lovely tree has now been officially classed as dead, and is due to be cut down and logged any day. I have a sneaking suspicion that we will still be referring to the 'Silver Birch bed' though, for many years to come.

So, I'll come clean, and name the parts of our garden, and leave you to be the judge! Pretentious ? Moi ? Or just plain sensible?

Go through the gate and there is a series of named bits, namely 'Helen's Garden' (made and named for a dear friend who died three years ago); the Silver Birch bed; the Cotinus bed (self explanatory) and the 'Greenhouse bed' (still so - called, even though the greenhouse itself is lost in the mists of time).

Then there is 'Top pond' ( as opposed to 'Bottom Pond'), before an arch leads through to the 'Bus shelter' garden (so named after a seat, also no longer here, which did bear a striking resemblance to the real thing!).

This is the part of the garden which is taking up much of our time and thoughts at the moment, as we are giving it a major overhaul and changing the feel of it completely. It has never really had a defined style, and has several half-hearted manifestations over the years. A few weeks ago we decided to extend the sub tropical garden into this area, and give it a makeover. Plants have come out to make room for hardy exotics to go in. It has involved lots of hard work and digging , but the hard work is now completed. 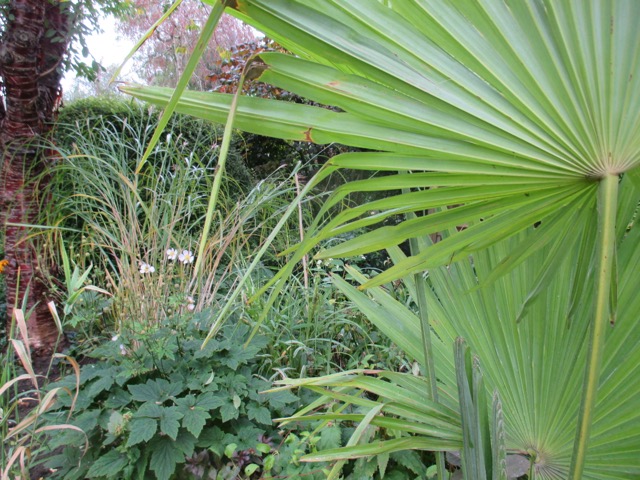 Now, as the 'Bus Shelter' is no more, and that part of the garden has re-invented itself, I think we need a new name for it. Something a bit self-deprecating, may be a bit amusing and something which rolls off the tongue. Any ideas will be more than welcome ! We have started referring to it as the 'Sub Trop', but we can do better than that!

Moving on down the garden we have the 'Summer House garden' (the sub tropical/ hardy exotic bit, in the midst of which really IS a summerhouse!), veg plot (does what it says on the tin!) , 'orchard' ( ha ha ha ! Do three spindly fruit trees constitute an orchard? That one IS a bit pretentious!) and 'Bottom Pond'.

Most of our  names are a bit like 'Church Street' - just shorthand references to physical markers which identify a particular area. they are very pragmatic and down to earth. No'Jewel Garden' or 'Writing Garden' here! Perhaps we should rename them the 'Sciatica Garden', the 'Dandelion Garden', 'Dove Pooh Path' and 'Border of a Thousand Curses'?

Go on then, I've come clean and shared ! What names do you have for the different  areas  of your garden ?