'Tis the season to ... cut down trees 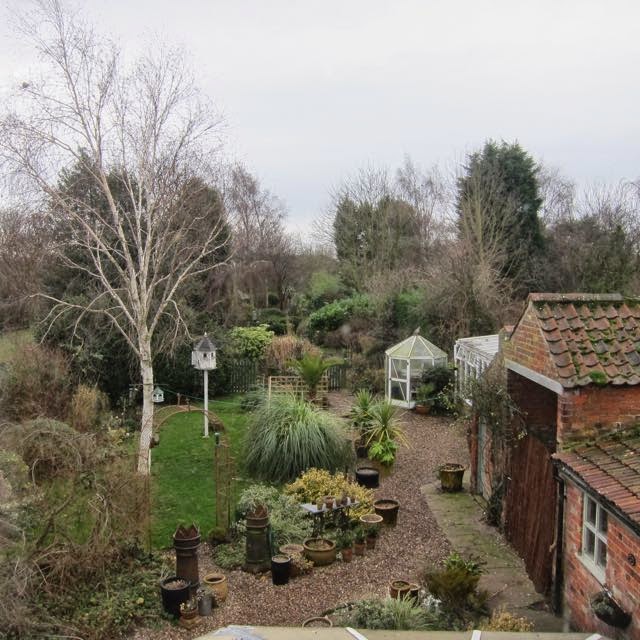 It's not the bells which have been ringing out in my neck of the woods, this last few days, but the chainsaws! For some reason, our little cluster of neighbours,  have gone chainsaw crazy and cut down enough trees to keep those festive log fires burning for months. 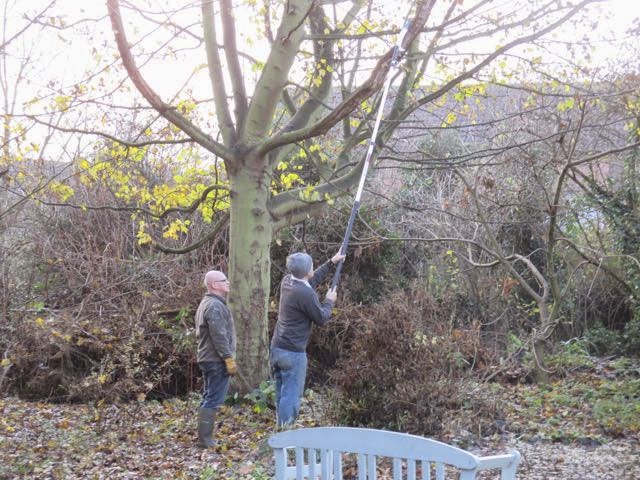 Yesterday there were actually three chainsaws droning away in unison, in different gardens, and between us, we have made a lot more sky visible. Whole new vistas have been revealed which we were unaware of.  Light is flooding into murky corners, where only ivy was brave enough to grow.  I reckon we will have two to three more hours of sunshine in our garden every summer's afternoon, due to our lovely neighbours removing three very tall, wide and sombre conifers. All the conifers visible at the right-handside of the photo at the top of this post, have now vanished into thin air ! The photo below shows just what they were concealing from us. 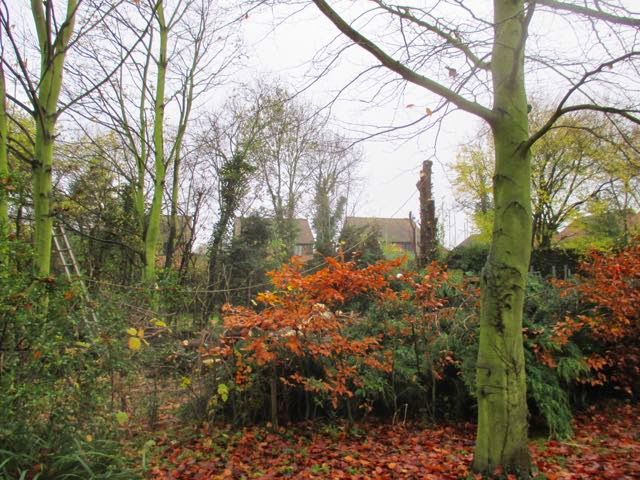 Our garden needed some work doing on it, mostly annual maintenance of hedges, pruning and raising of tree canopies, so we called on the ever- affable Richard to come and work some magic. He took off a lot of lower branches on specimen trees to allow more light and air into the garden. 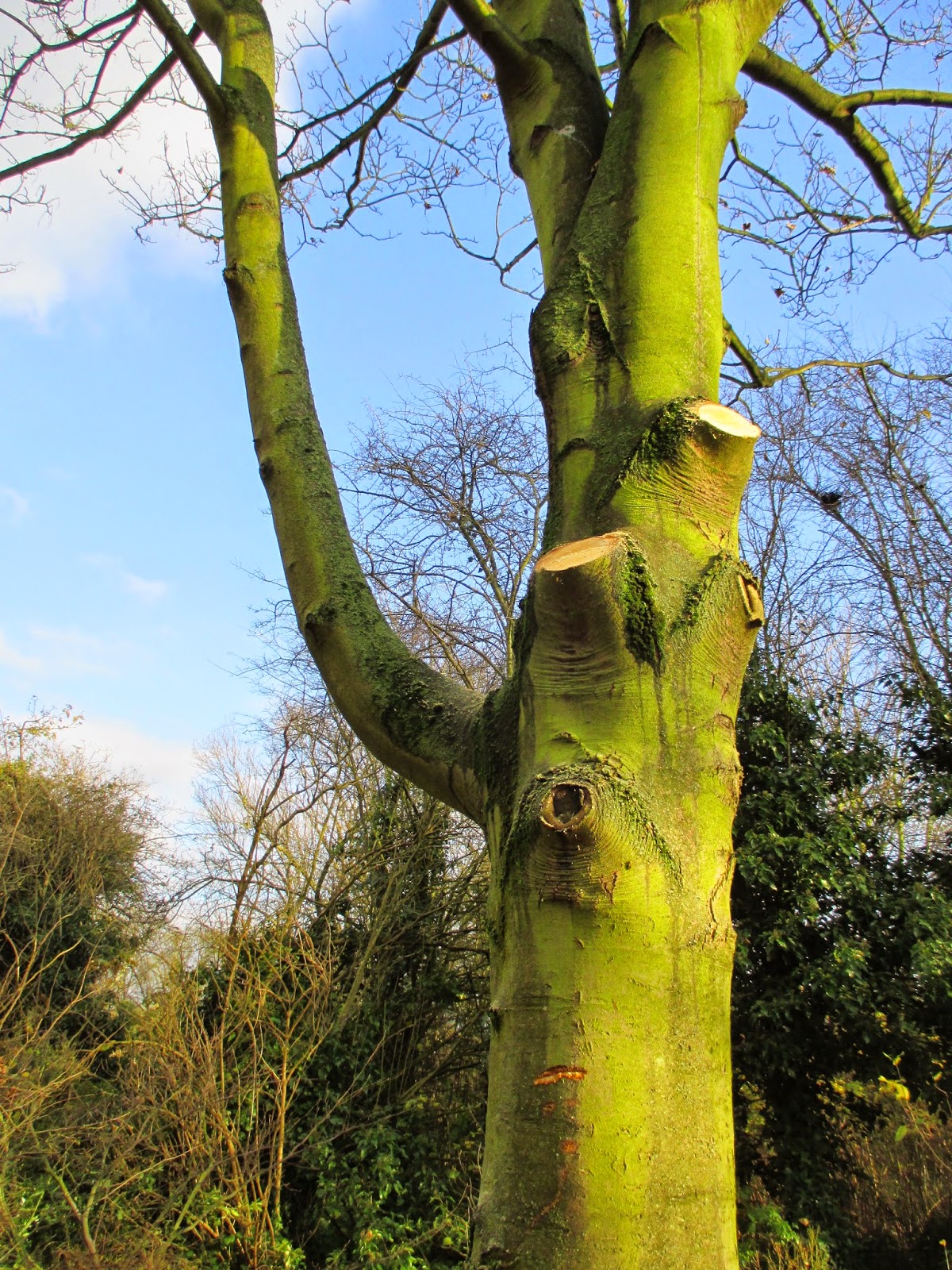 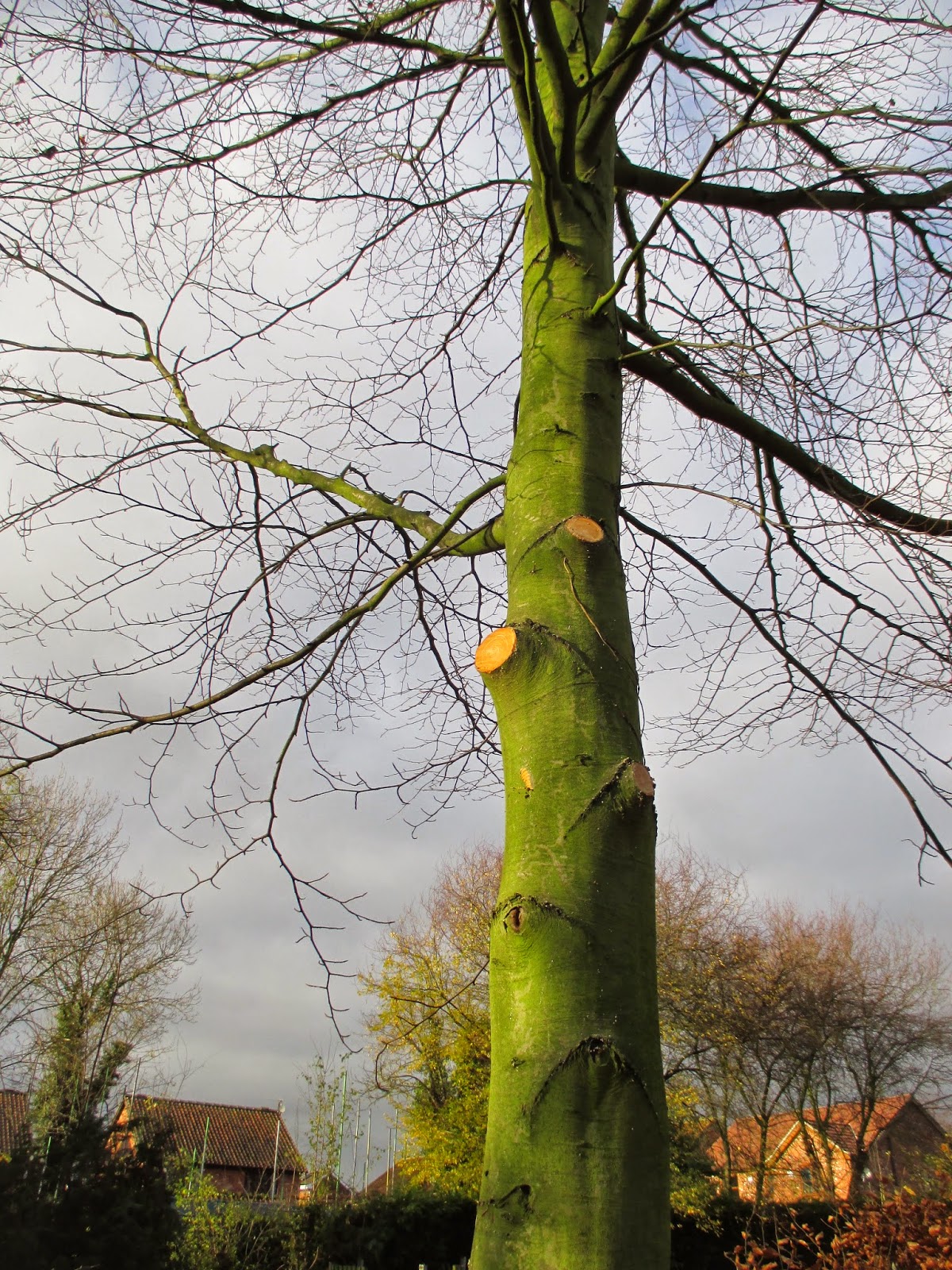 One large sycamore branch was overhanging the wildlife pond, and we were worried that it might puncture the lining, if it fell in as it was sawn through. However, all was well and the offending branch landed on nearby grass with a satisfying thud. 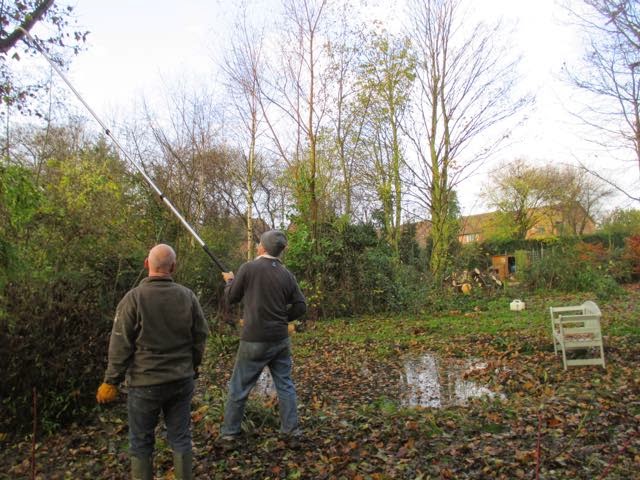 Richard mainly used a manual telescopic saw for the branches, which meant that he did not have to use ladders, or do any climbing. The three tree surgeons who were working next door, yesterday, had a different approach and climbed the trees before the cutting sections above them, with a chainsaw. 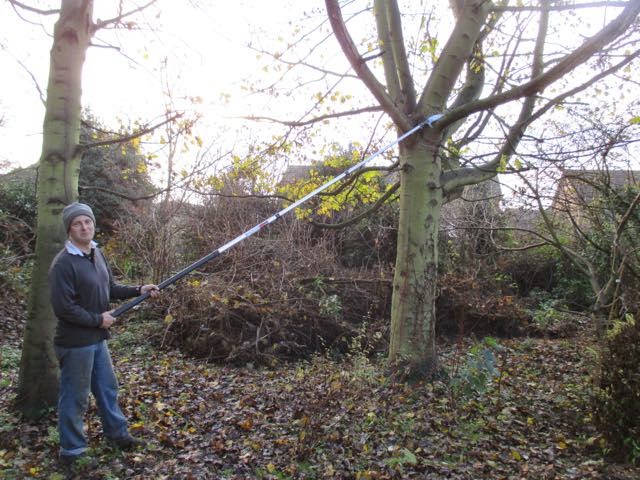 Half way down the garden is a massive, prostrate conifer which takes up half the garden and is officially the most boring plant on earth. I hate it with a passion and have been giving it the evil eye for years, hoping it would wither and die. It has resolutely ignored me, and remains in the rudest of rude health. And so began a 'discussion' about its future, which has lasted for months between the Under Gardener and myself. I had already donned my black cap, but the Under Gardener begged for a reprieve for the conifer. Guess who won ? Ten minutes work with the chainsaw  and I now have a whole new area to plant up ... and I have the roses lined up and ready! 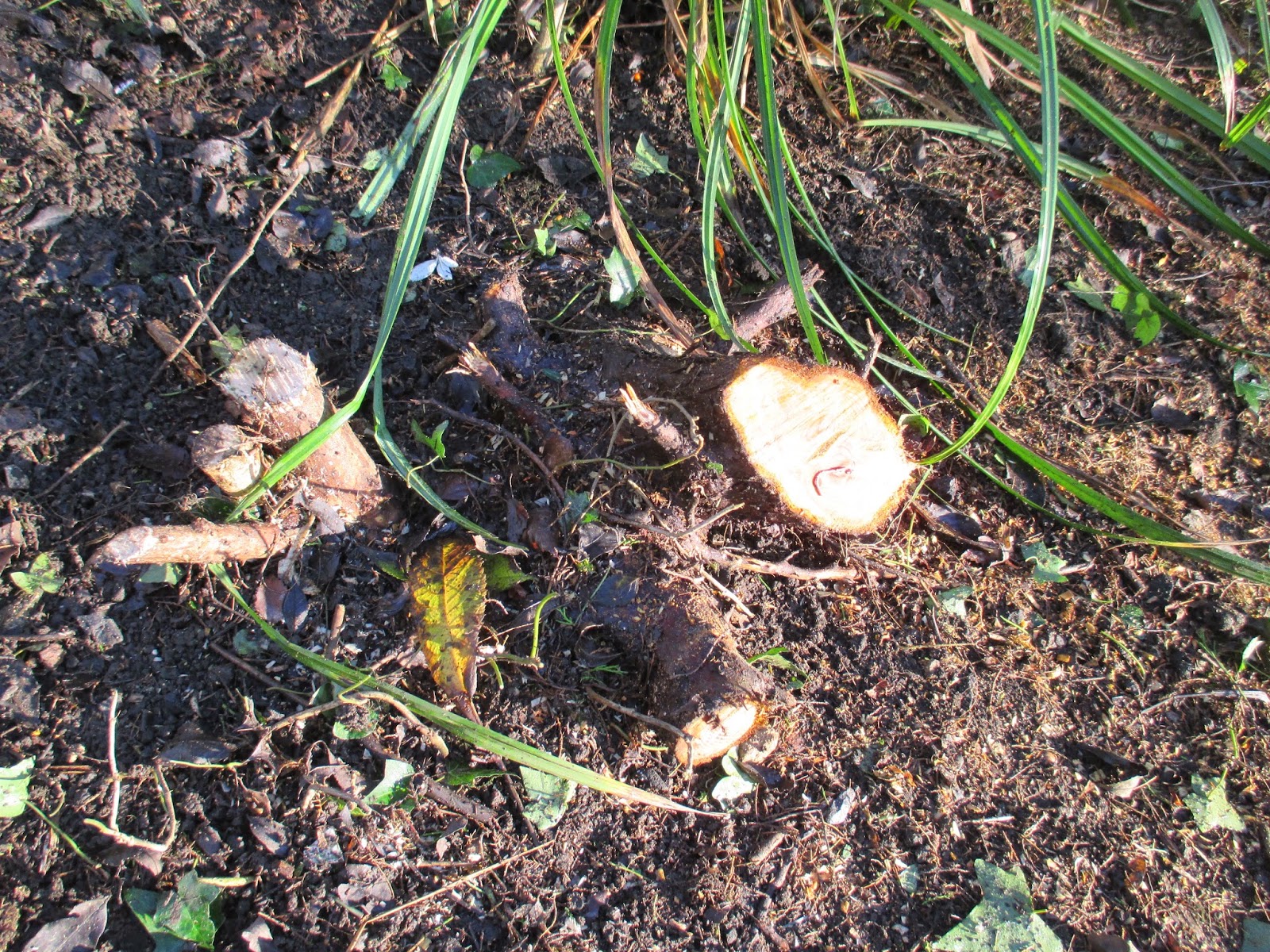 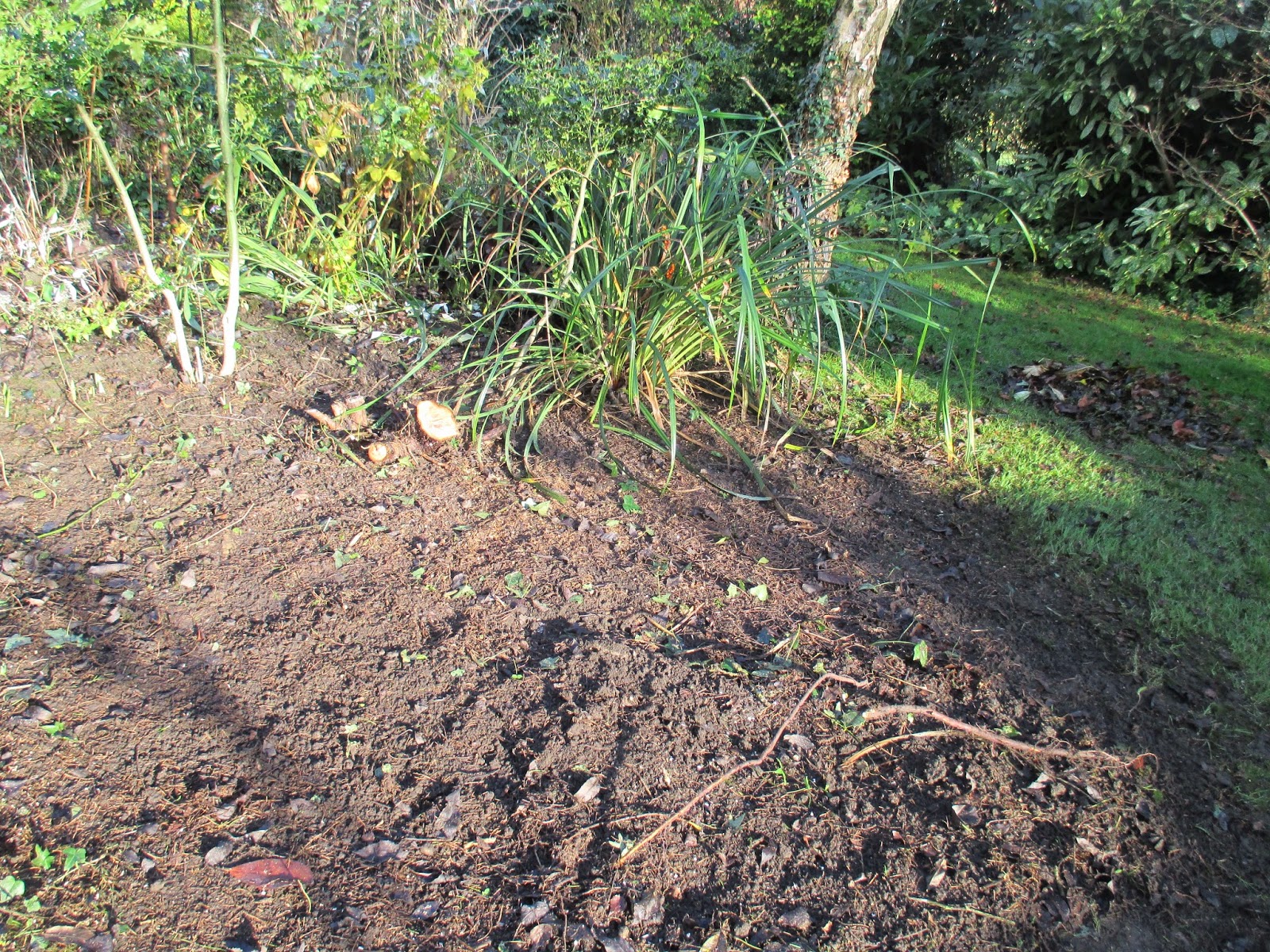 Richard also cut down some complete trees for us, mainly old, self set elders strangled by ivy, and an odd multi - trunked self seeded Robinia which was growing way too large. He did the sawing and we did the labouring, trundling up and down the garden with logged branches and barrows full of brash. There are going to be some cracking bonfires over Christmas and New Year. 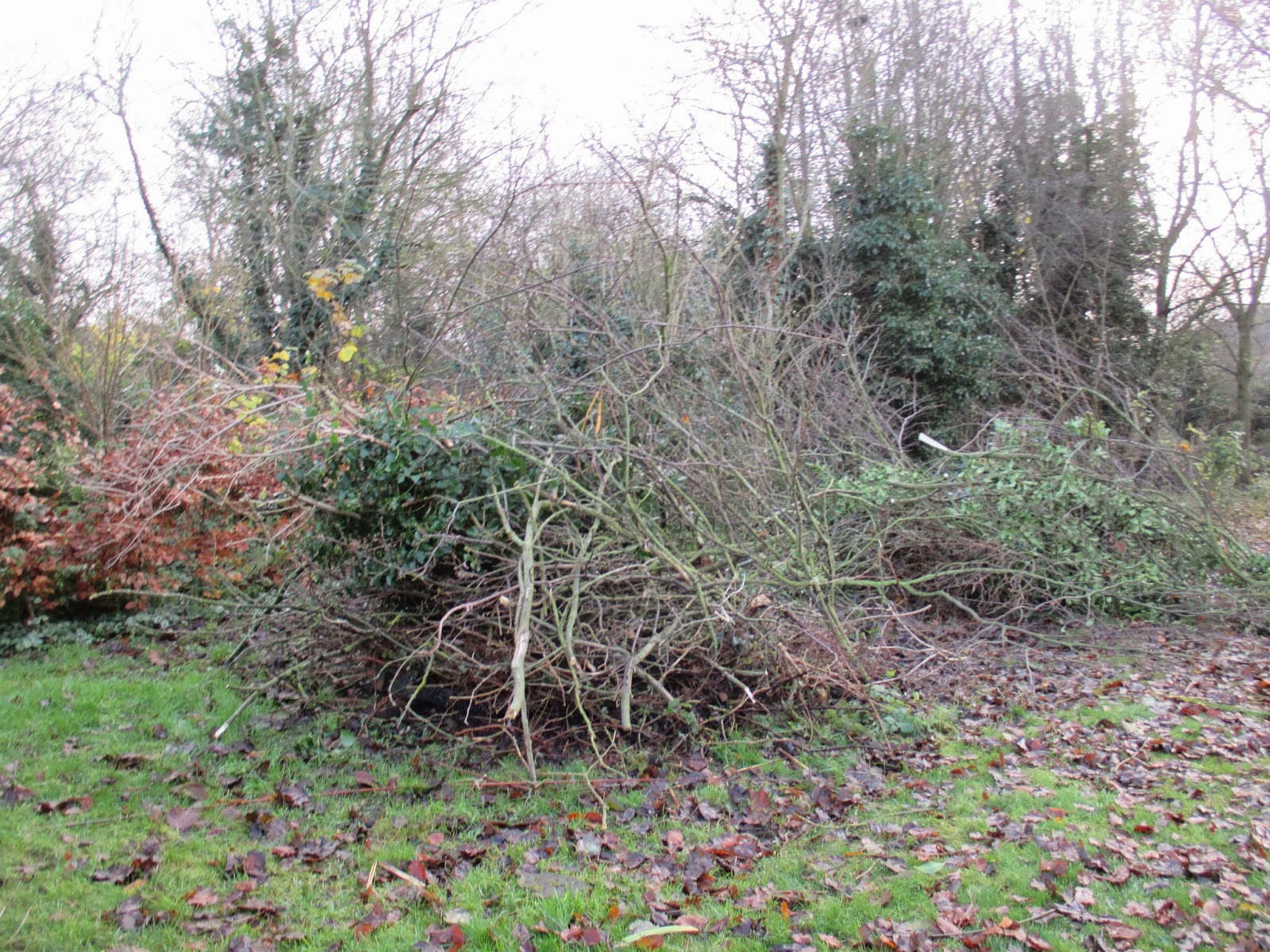 Now, a whole day of a chainsaw has led to a very full log store, and I feel just like a squirrel must feel when it has a store of nuts for the winter - smug! There is no better feeling than looking at a full log store knowing that the wind may blow, the snow may fall, the power may be off - but if you have a full log store you know you can weather it all in a cosy glow. 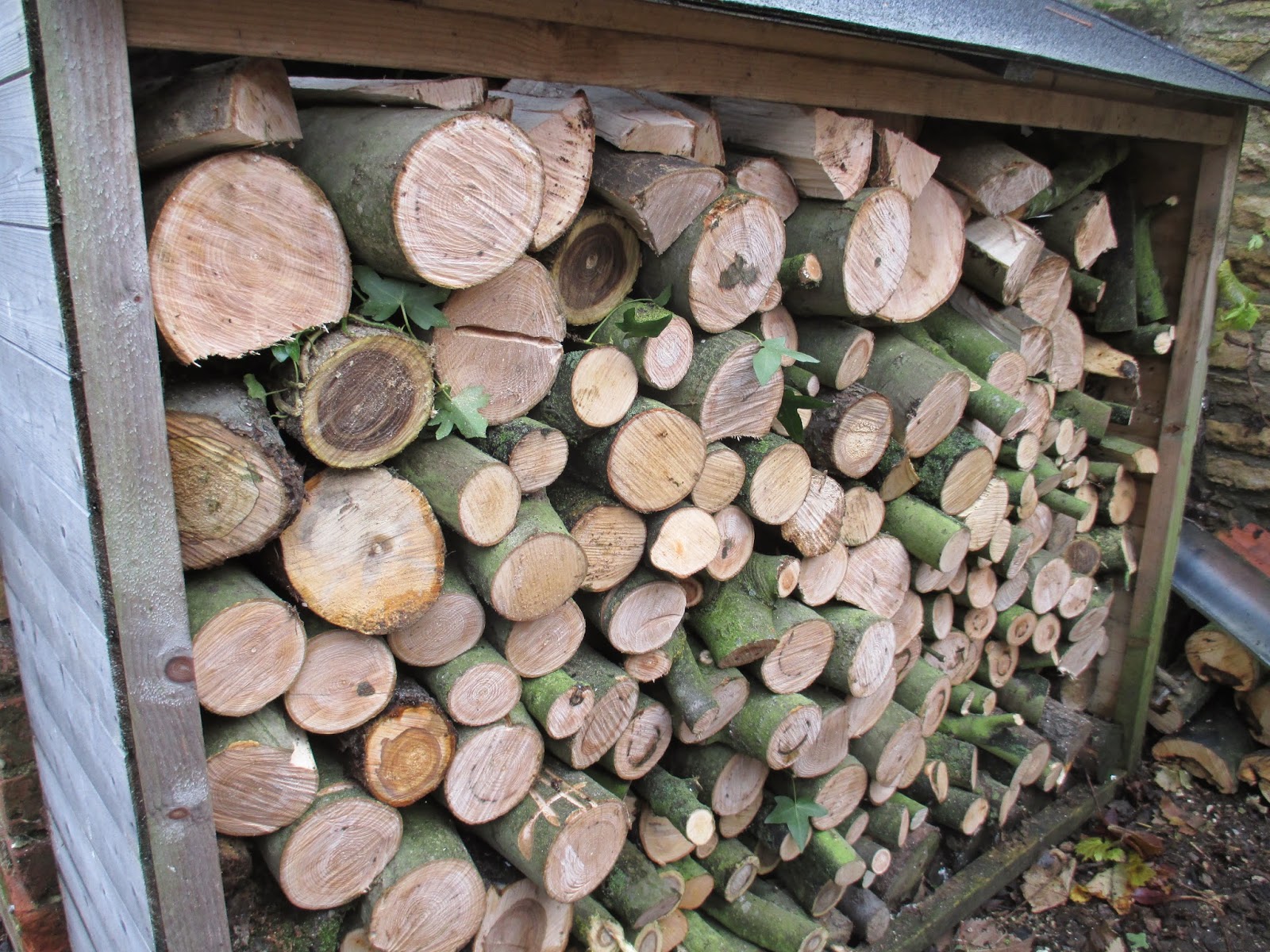