Most Octobers end rather gloomily, as they merge seamlessly into Novembers, bringing dark and grey and cold. Not this one though! It is like a parade full of cheerleaders who just won't go home. The sun is still shining with a pleasing amount of warmth, and the flowers are being fooled into the longest blooming period EVER! I found a new delphinium flower today, the geraniums are beginning to flower again and the roses think it is still June. 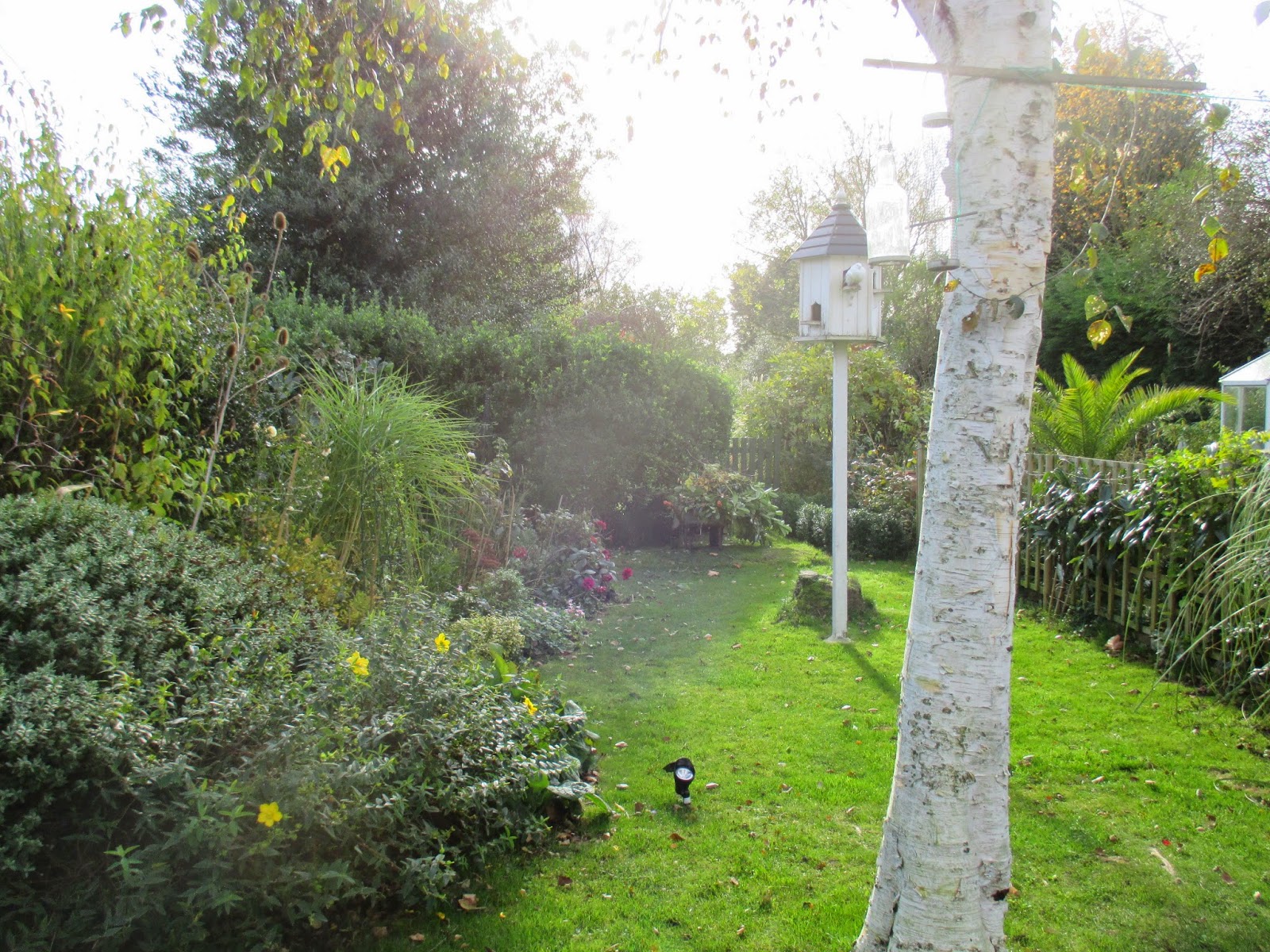 Although there are inevitably gaps in the borders where I have had to cut back, the general feeling is still one of fullness. The Hypericum is flowering again albeit sporadically, and the dahlias have never stopped. 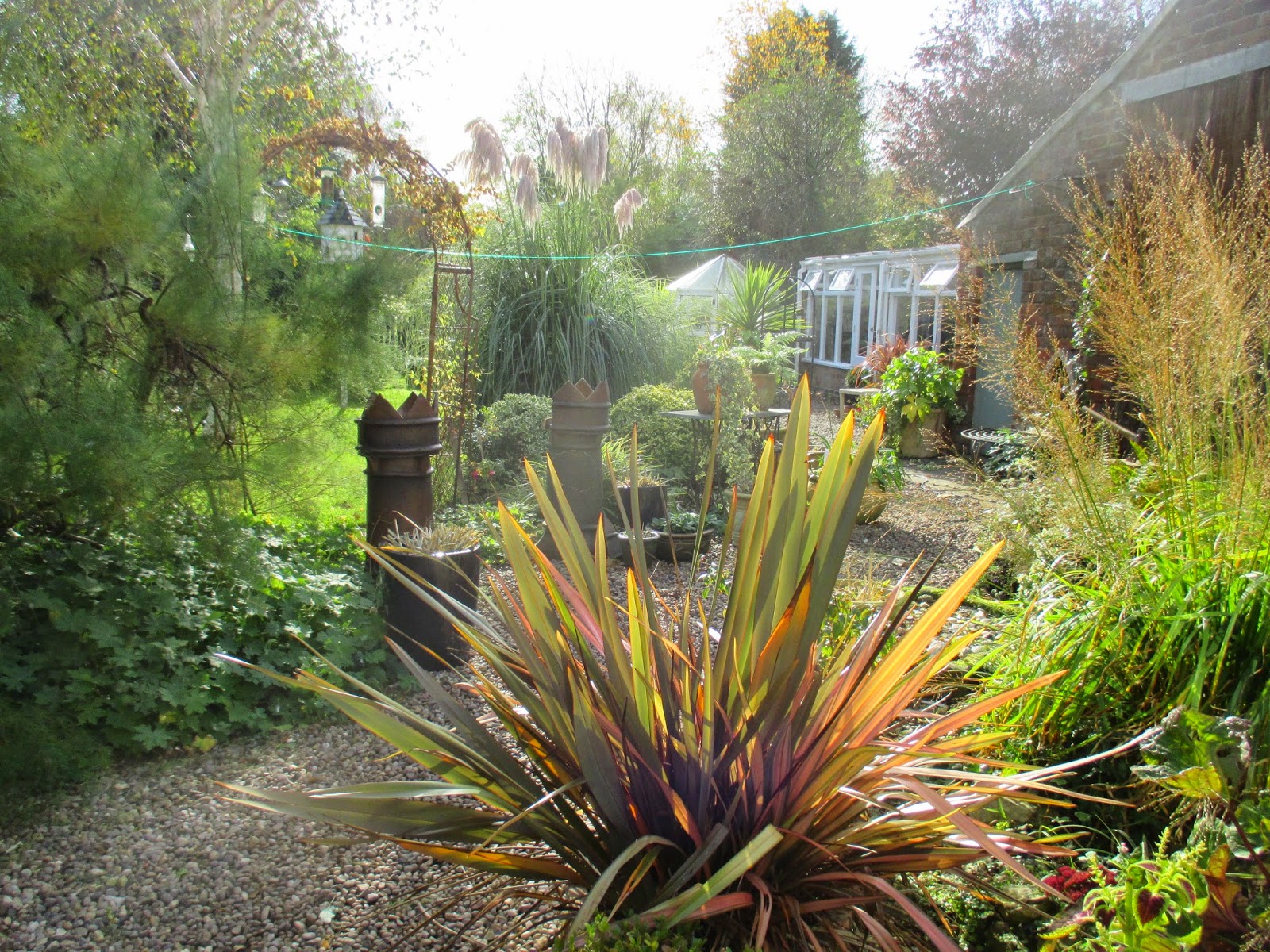 The Hostas that are in the chimney pots have been cut right back, as have all the others in the garden - except one, which is just coming into flower and is as perky as the others were in April !

The Molinea has come into its own this year, as the light has been perfect, and shown its delicate seed heads off to perfection, as they have almost glowed in the mellow October sun. The phormium 'Red Sunset' is more tender than it's green cousins, so will be wintering in the greenhouse when it gets cold. 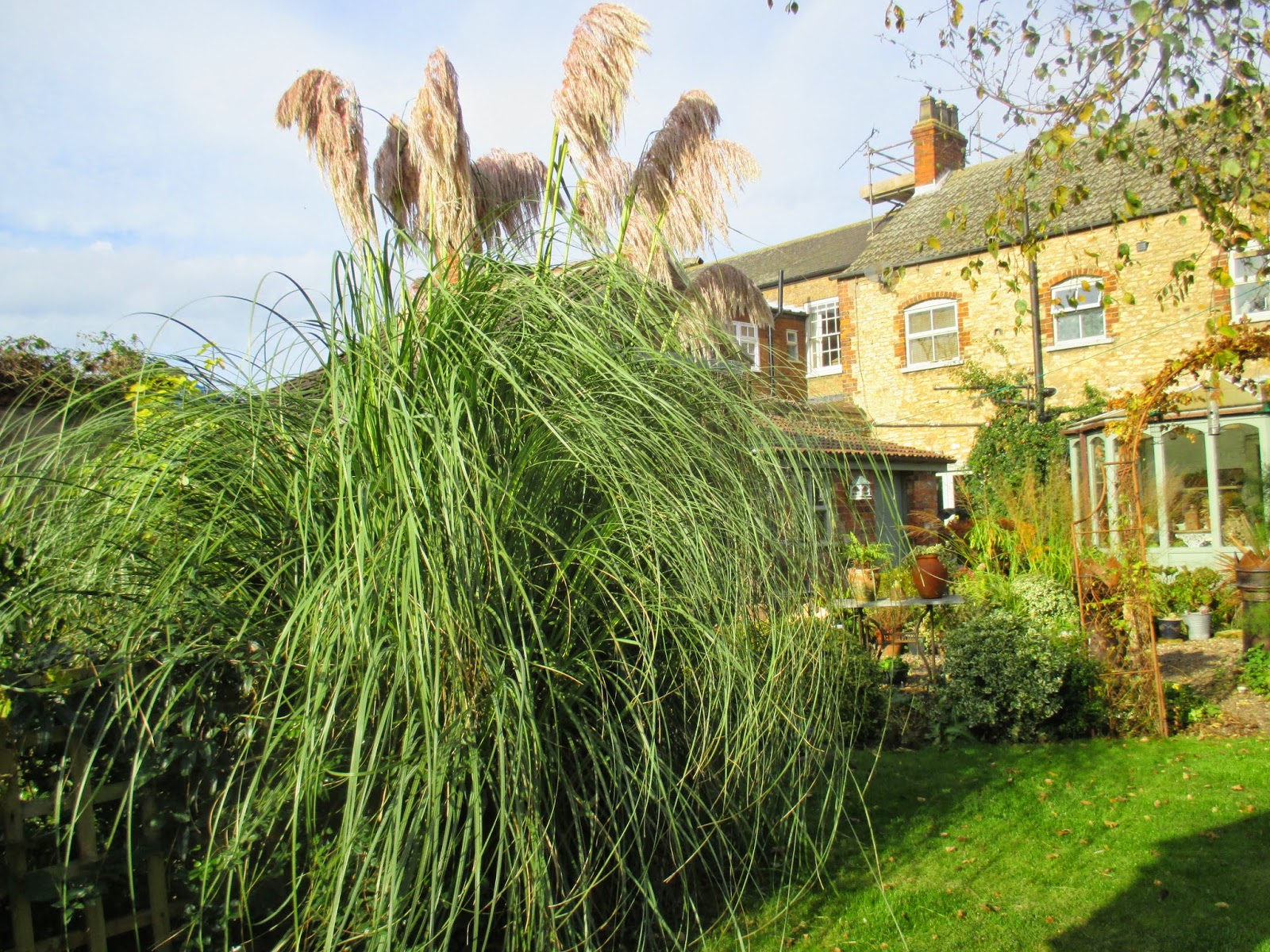 I bought this Pampas grass about twenty years ago at a really good specialist nursery , and it is by far the best I have seen. The plumes do not stand regimentally upright, but are fulsome, luxuriant and a soft shade of pink. 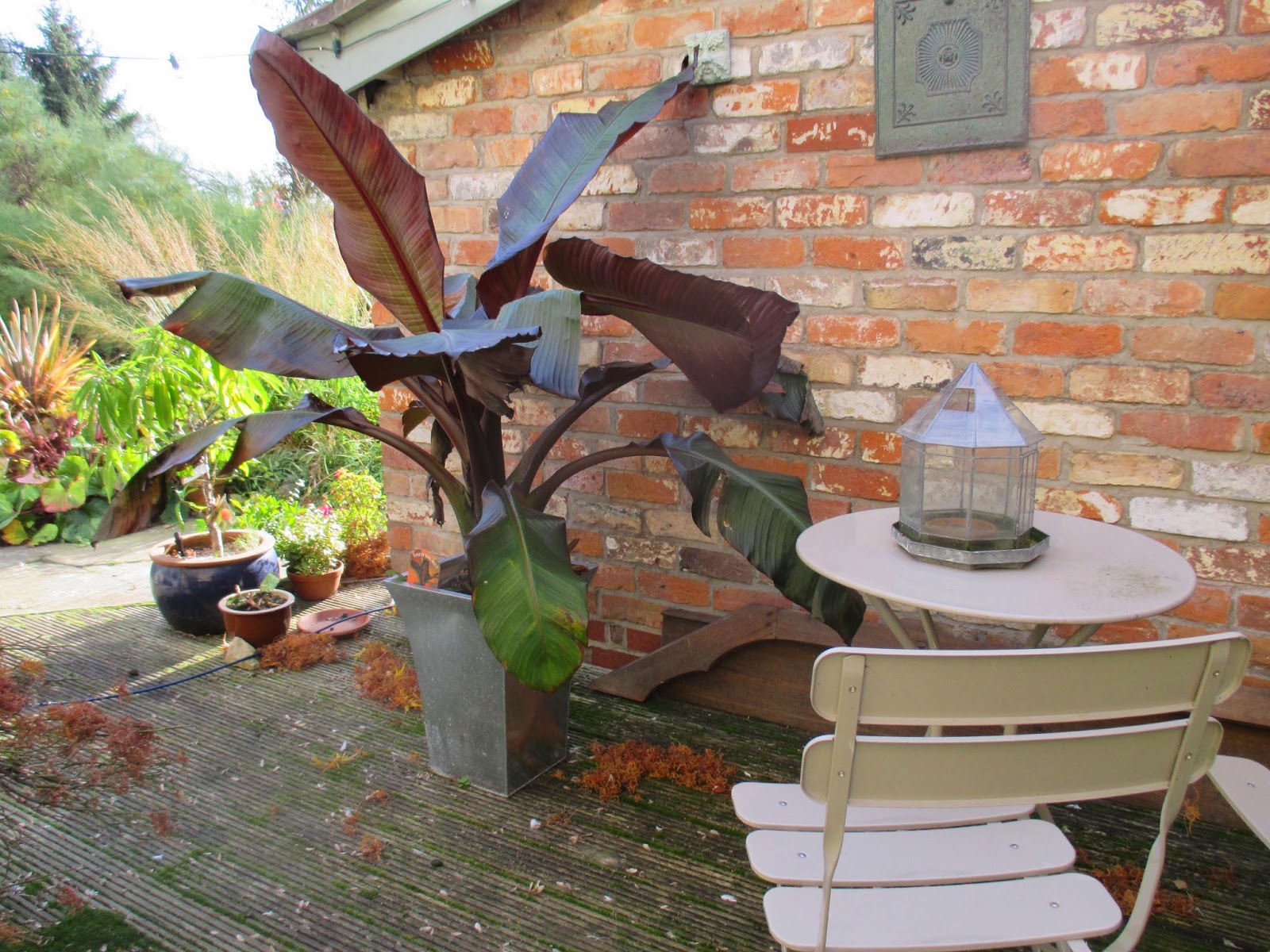 Now, a little conundrum for you ... how do you get a 5' x 5' banana into a big enough, warm enough billet to get it through the winter ? How do you even get it into the house ? Monty Don makes it look so easy ! However, I am determined it WILL get through this winter with every leaf intact, and have been heard to say that, if necessary, it can come under the duvet with me, if that is what it takes !! 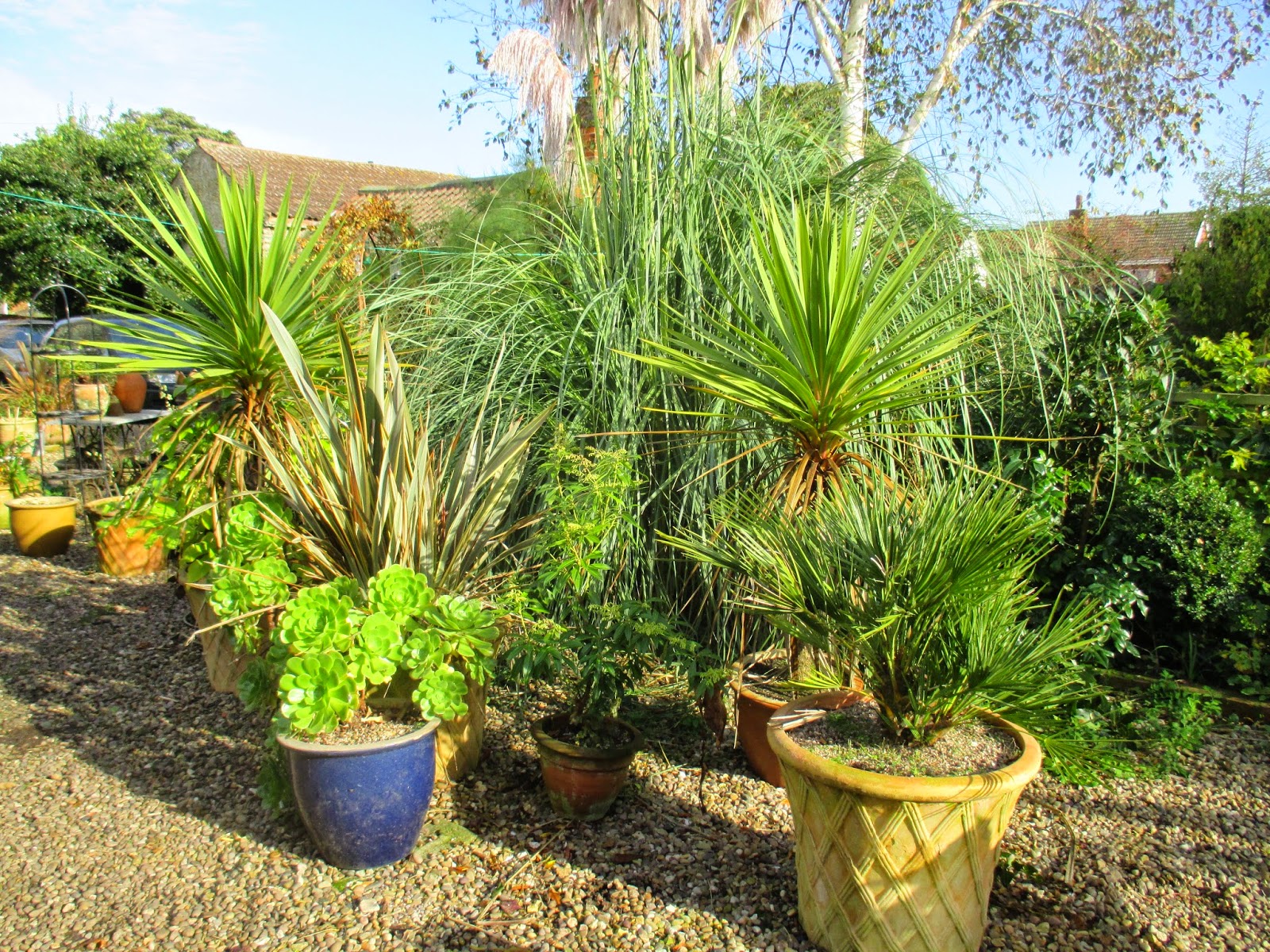 These chaps are enjoying the wonderful sunshine until it is time to form an orderly queue at the greenhouse door. If we keep them dry and protect with fleece/ greenhouse heater during severe cold, then they should get through the winter unscathed. 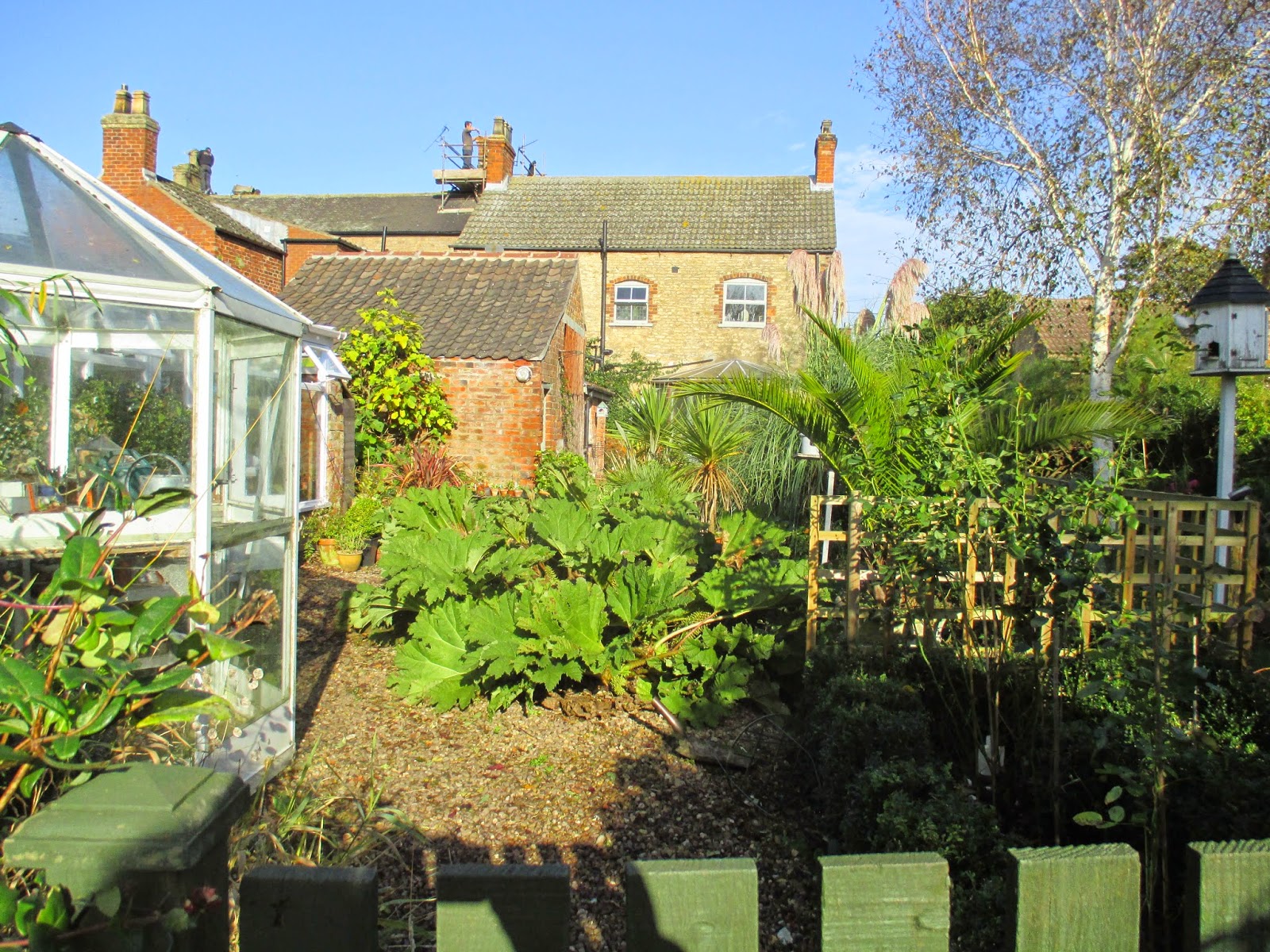 Before you think it, yes, I know that this Gunnera is in totally the wrong place, but it would be impossible to move/ threaten/ kill now. There used to be a rather nice pond there at one time, until we got Gus, the Aquatic dog, who flung himself in for a quick swim at every opportunity, several times a day. Quickly tiring of dripping dog and muddy paw prints, we filled in the pond and made a bog garden, putting in a tiny little Gunnera ...

(BTW that IS a man standing next to our chimney, as he works on the adjacent one!) 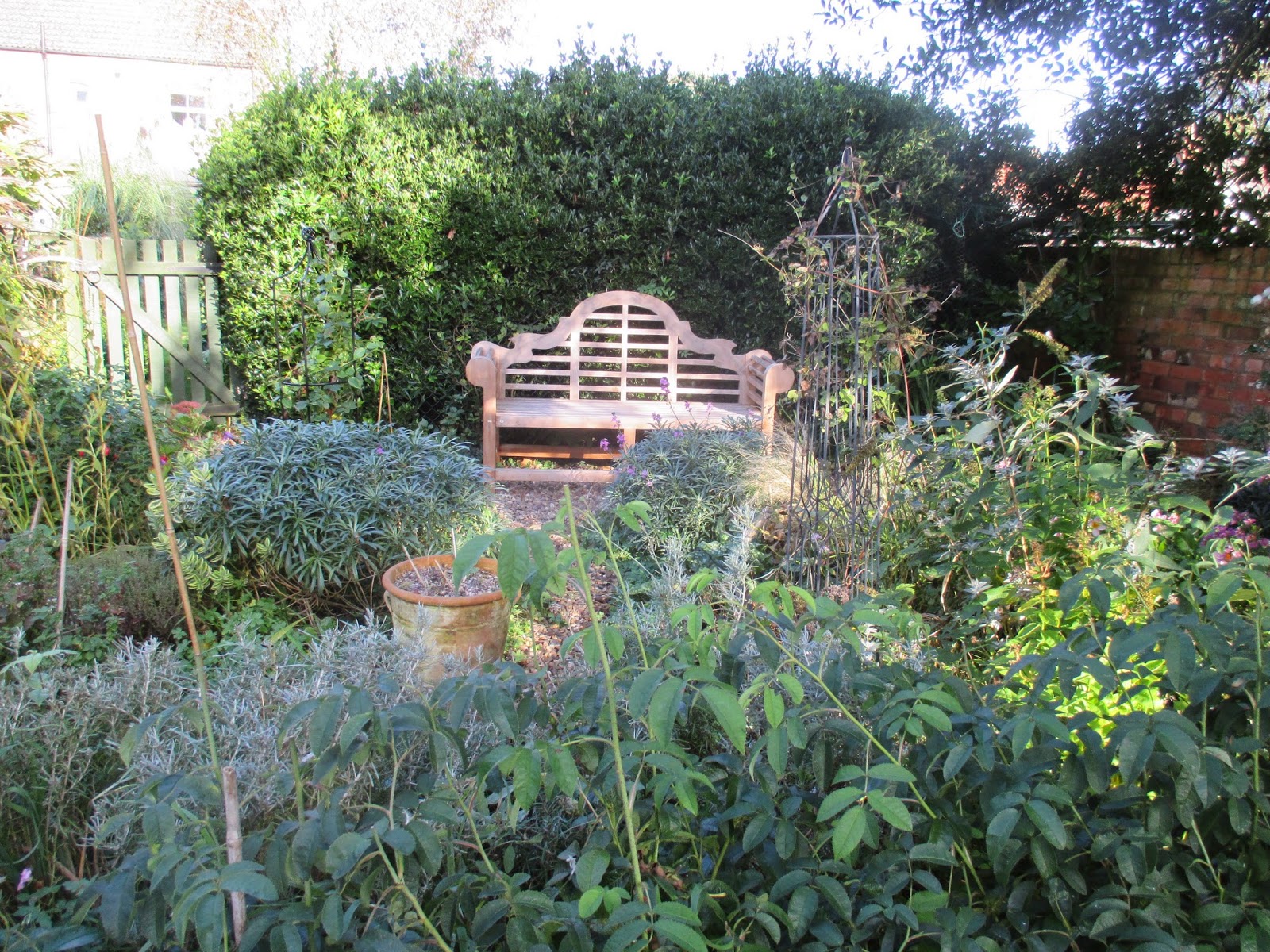 We got this new Lutyens bench a few weeks ago, and it is already beginning to soften in colour and, as it  weathers it will become silvery grey. It is my favourite place for sitting and contemplating. 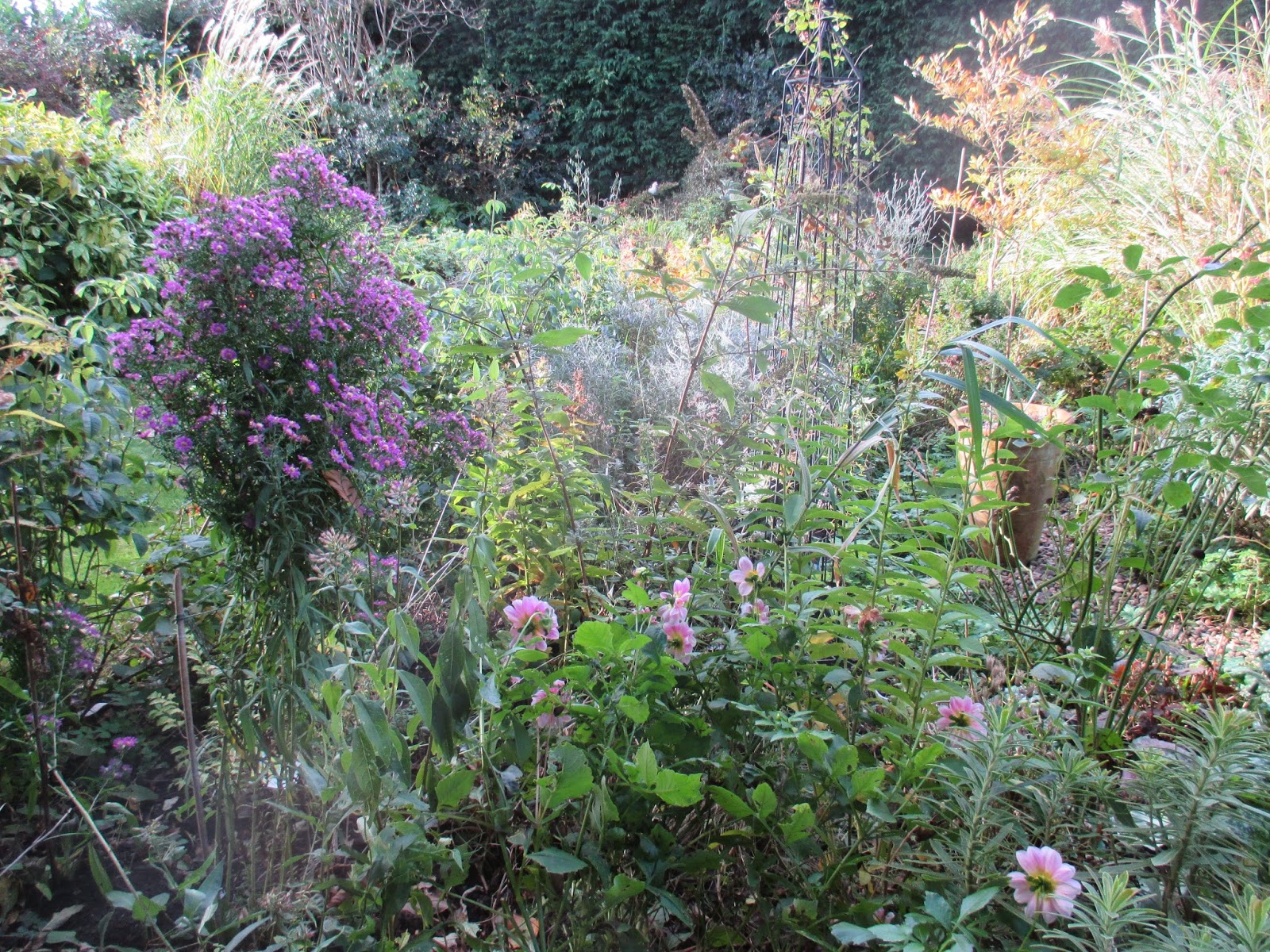 Dahlias and Asters are still flowering, as are random sweet peas ! 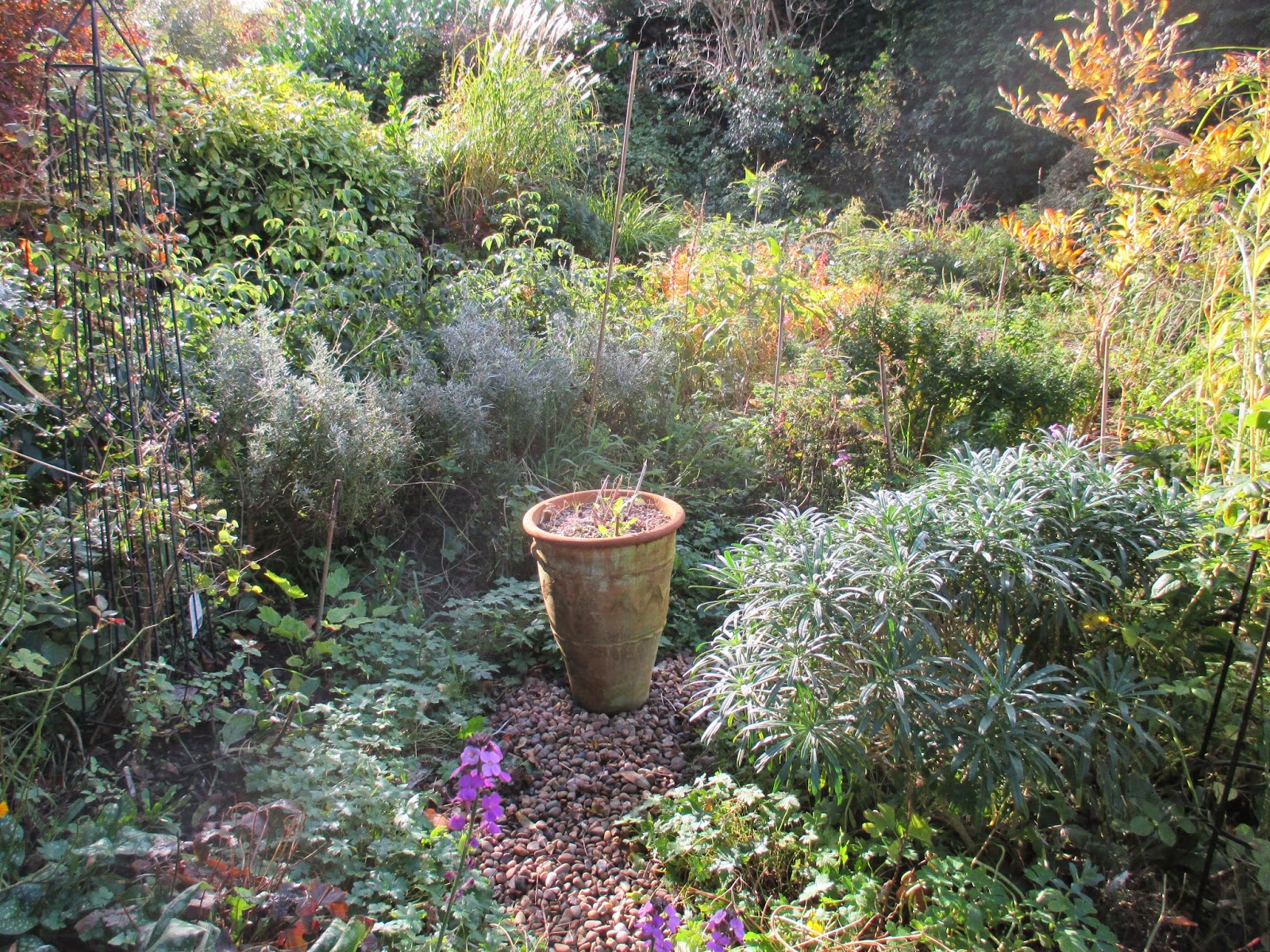 I have only really just discovered the joys of Erysimums, and the one in the photo is 'Bowles Mauve'. They are my kind of plant, as they stay the same, without staking, pruning, coaxing or cutting back. I love the long flowering period and the compact shape. I have planted out half a dozen young Erysimums of different colours/ varieties and am interested to see how they progress. I bought them on offer from 'Hayloft Nursery', online, a couple of months ago. 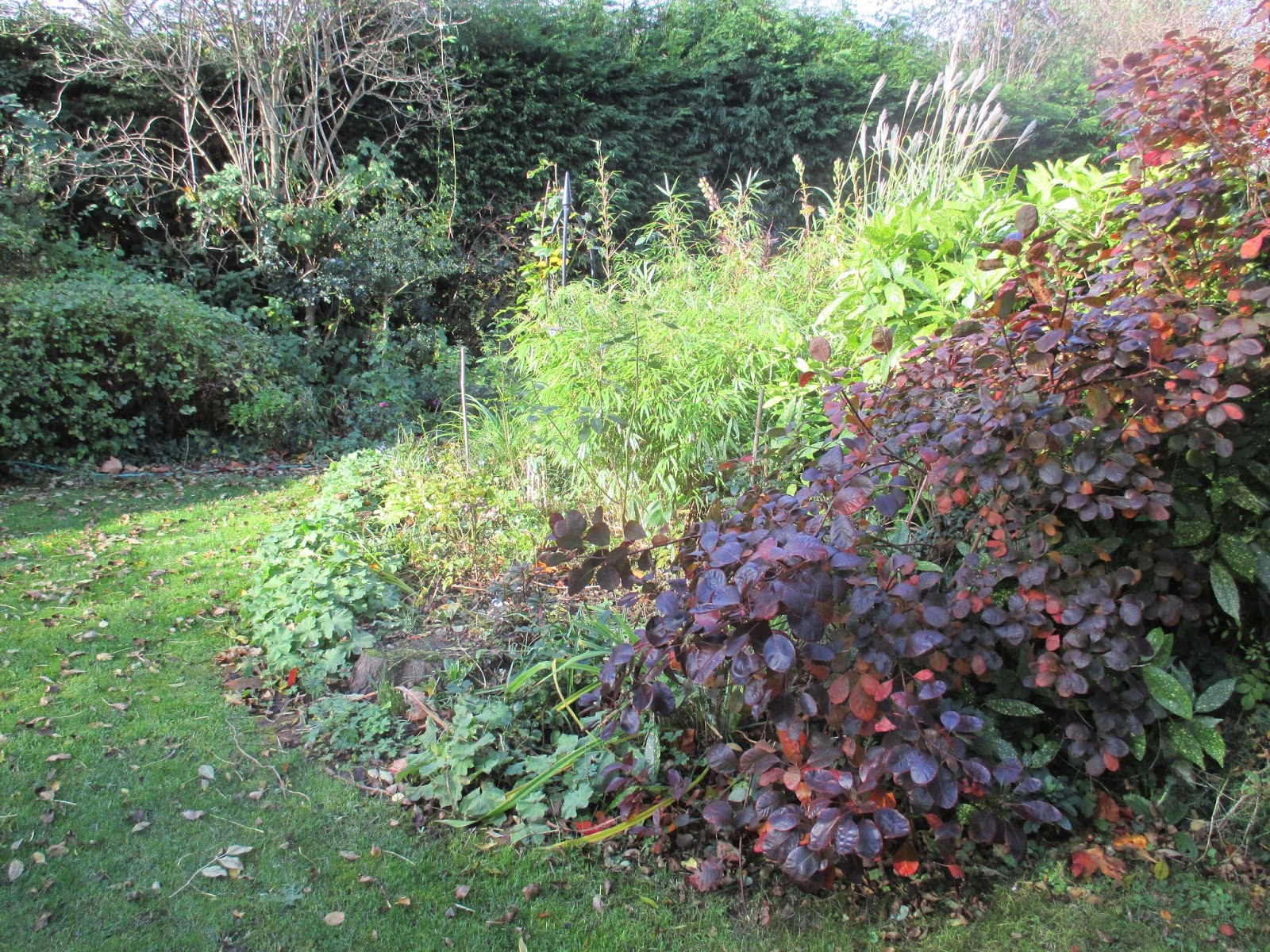 Cotinus Coggygria 'Royal Purple' never disappoints, whatever the season, and can make even my flower arrangements look good!

Come on 'Sexy Rexy', it's October, not June ! This ridiculously named rose was planted about six weeks ago, and is determined to flower before the end of the season. 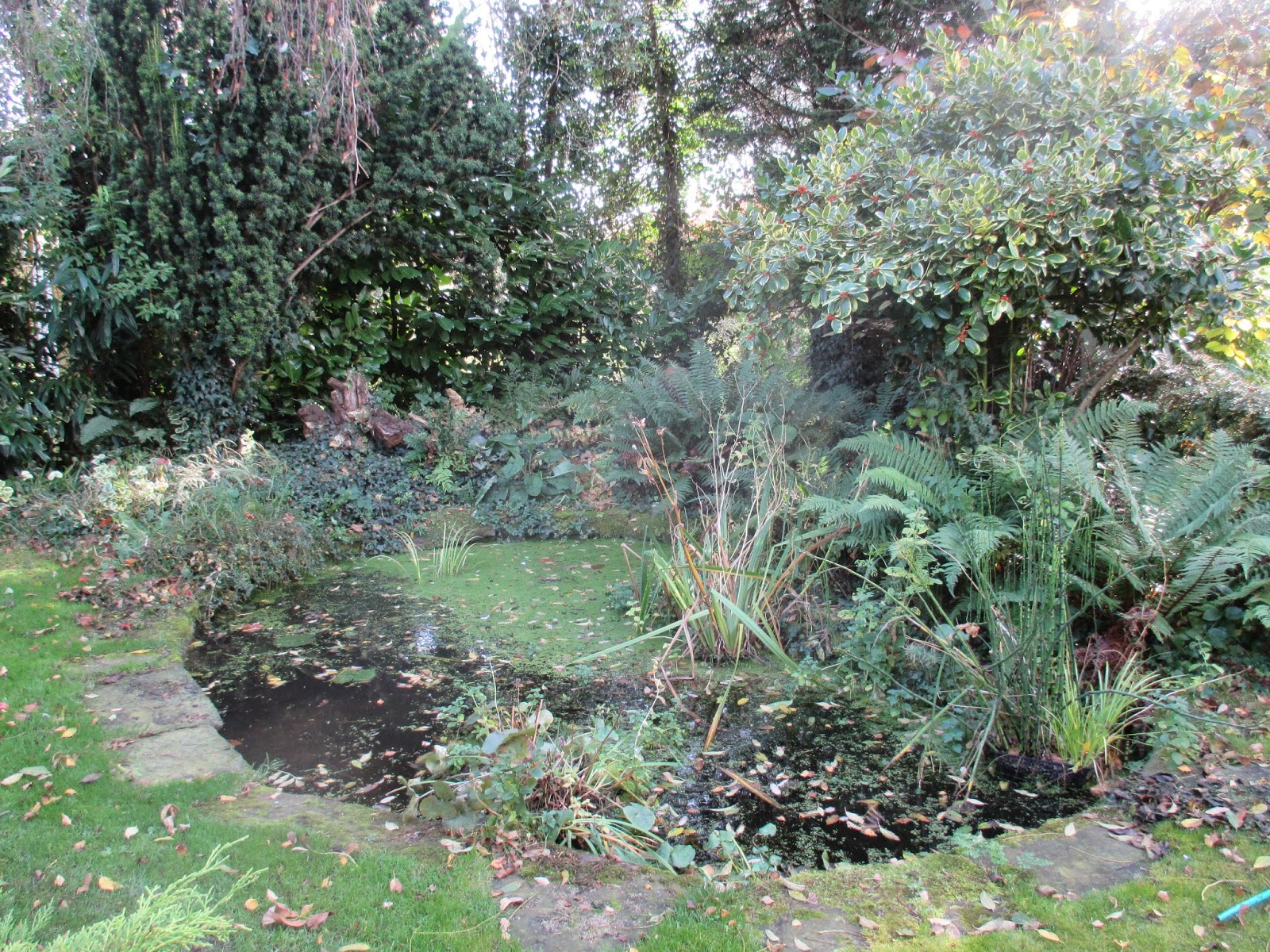 The vegetation in 'Top Pond' (as it is imaginatively called) is beginning to die back as the water temperature drops. 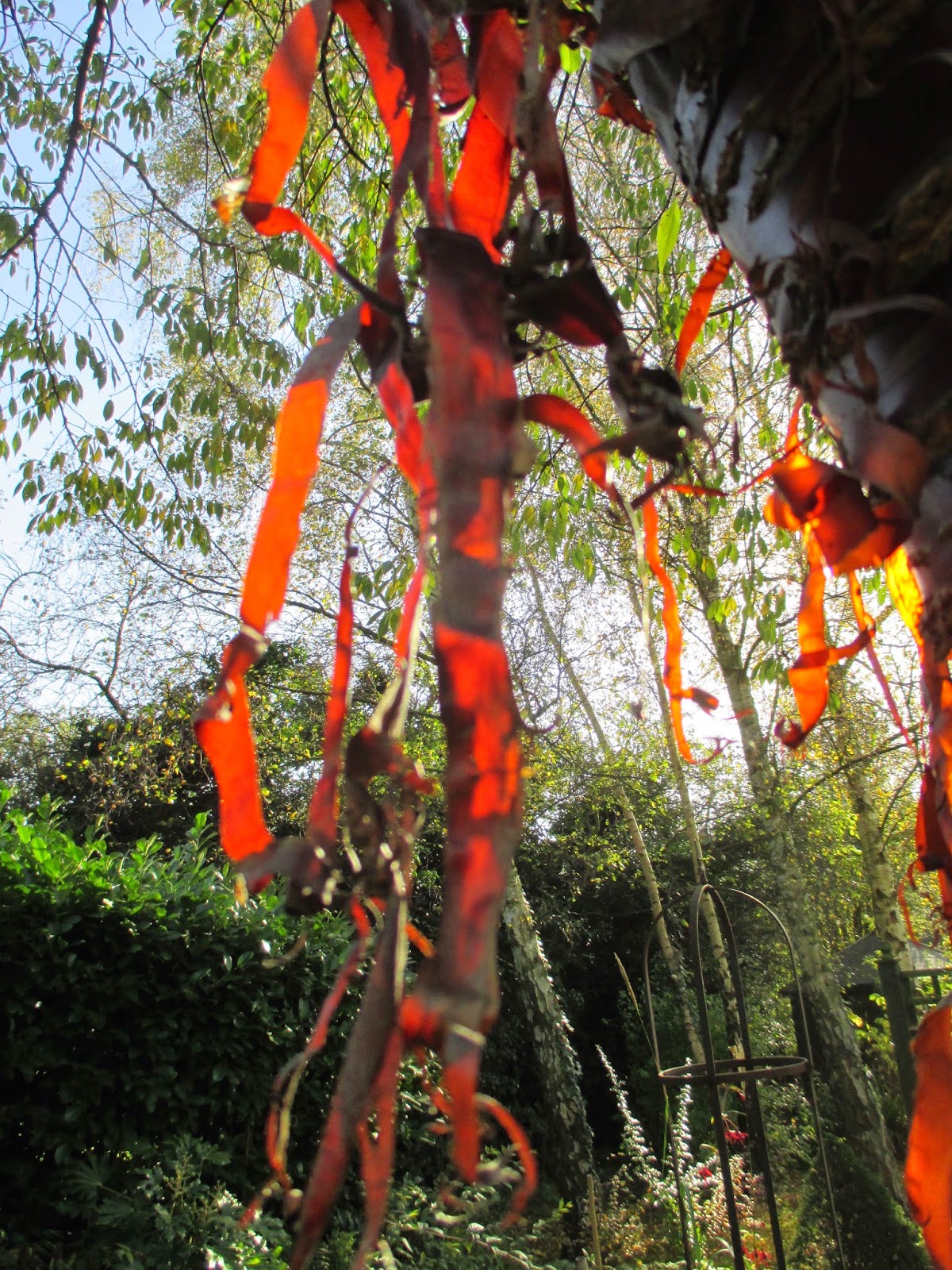 The first time I saw the sun streaming through the bark of this Prunus Serrula, I thought that the then -children had tied some sort of dayglo streamers onto it !  It is a beautiful sight, as there are always ribbons of bark hanging off it, and when they are backlit like this, the effect is stunning. 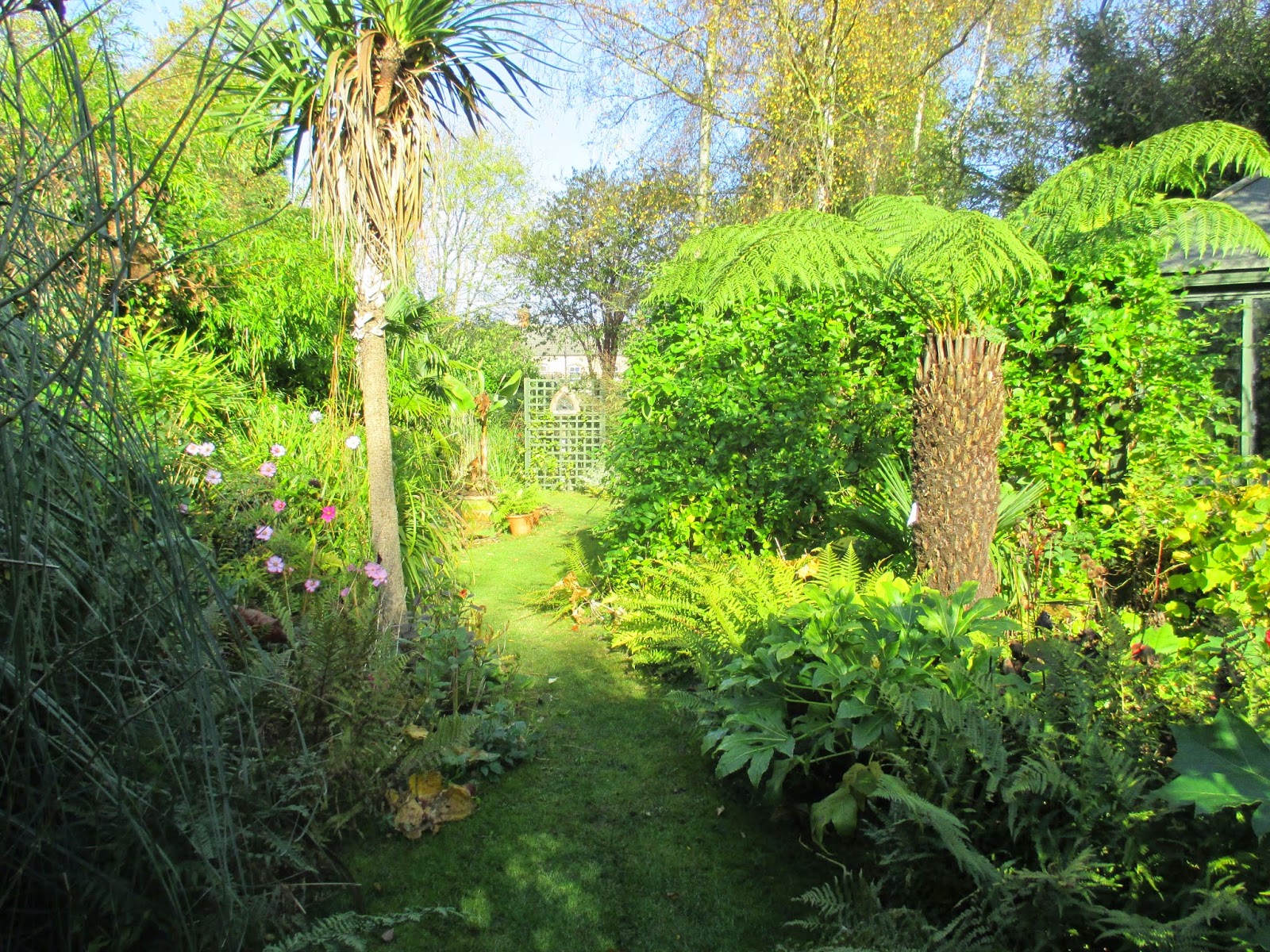 The sub tropical garden is untouched by the advancing season, and dahlias and cosmos are still flowering strongly. The Ligularias have died back, but other than that it remains unchanged. Fatsia Japonica (in the foreground) is totally hardy, and will remain unchanged through out the winter, apart from a few flowers it is beginning to put out. The ferns will disappear, unless they are evergreen, although I have to resist the urge to cut them back anyway, as they look very sad. 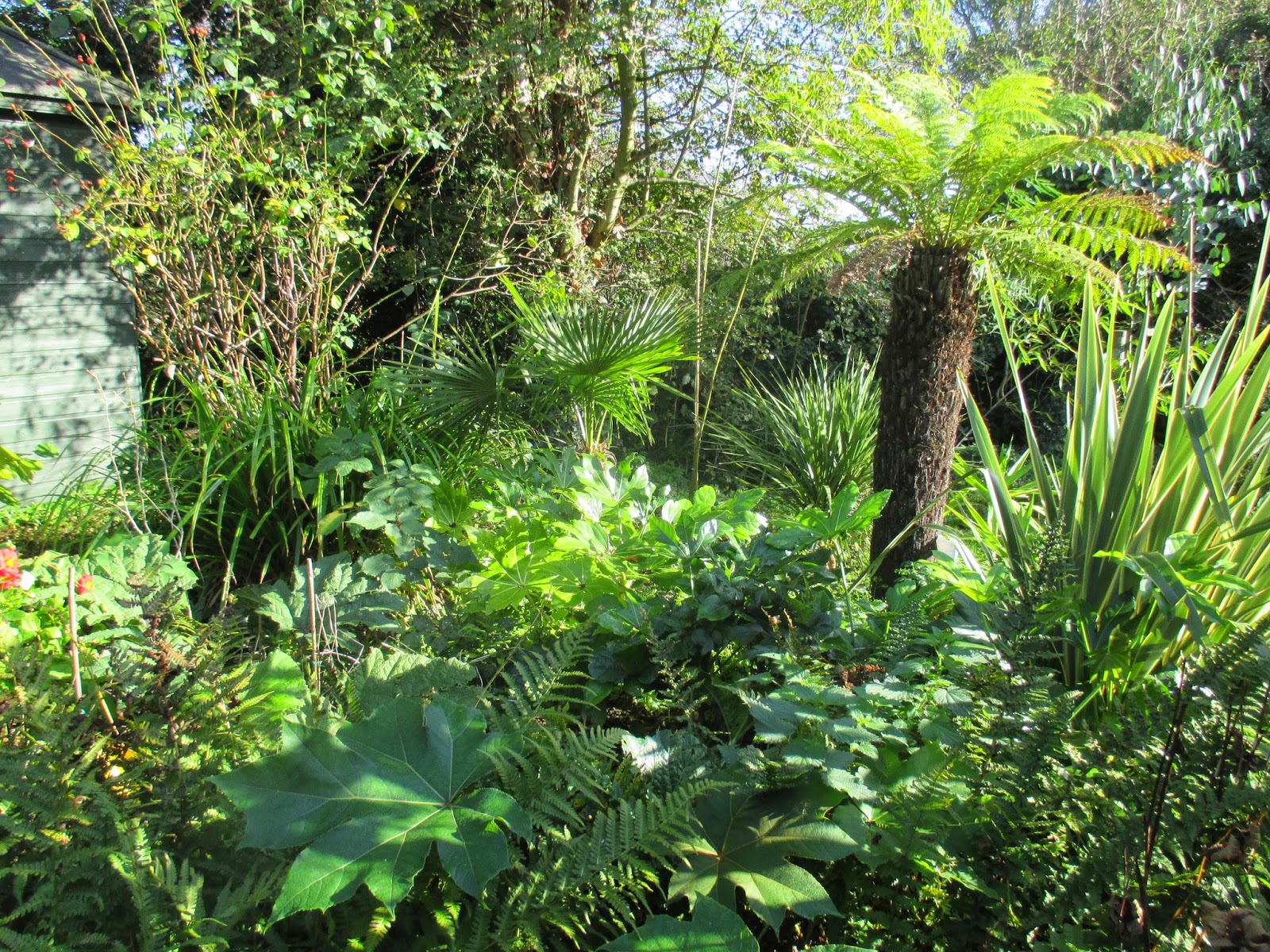 The Tetrapanax in the foreground has grown well this season, as it has relished the conditions. It is tender, but has come through two winters with just a thick mulch over it. It is in quite a protected position here, so the micro climate must be beneficial. 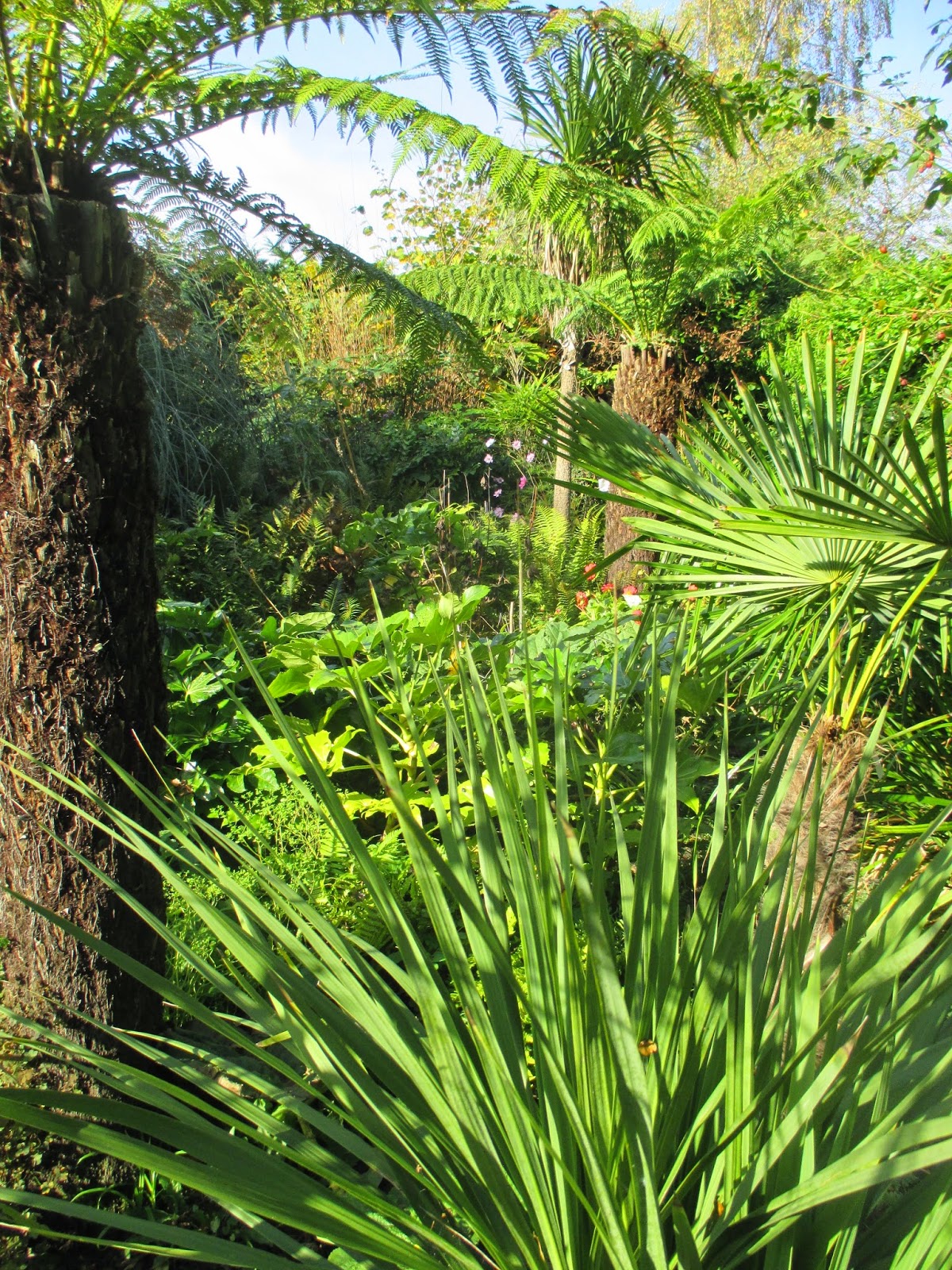 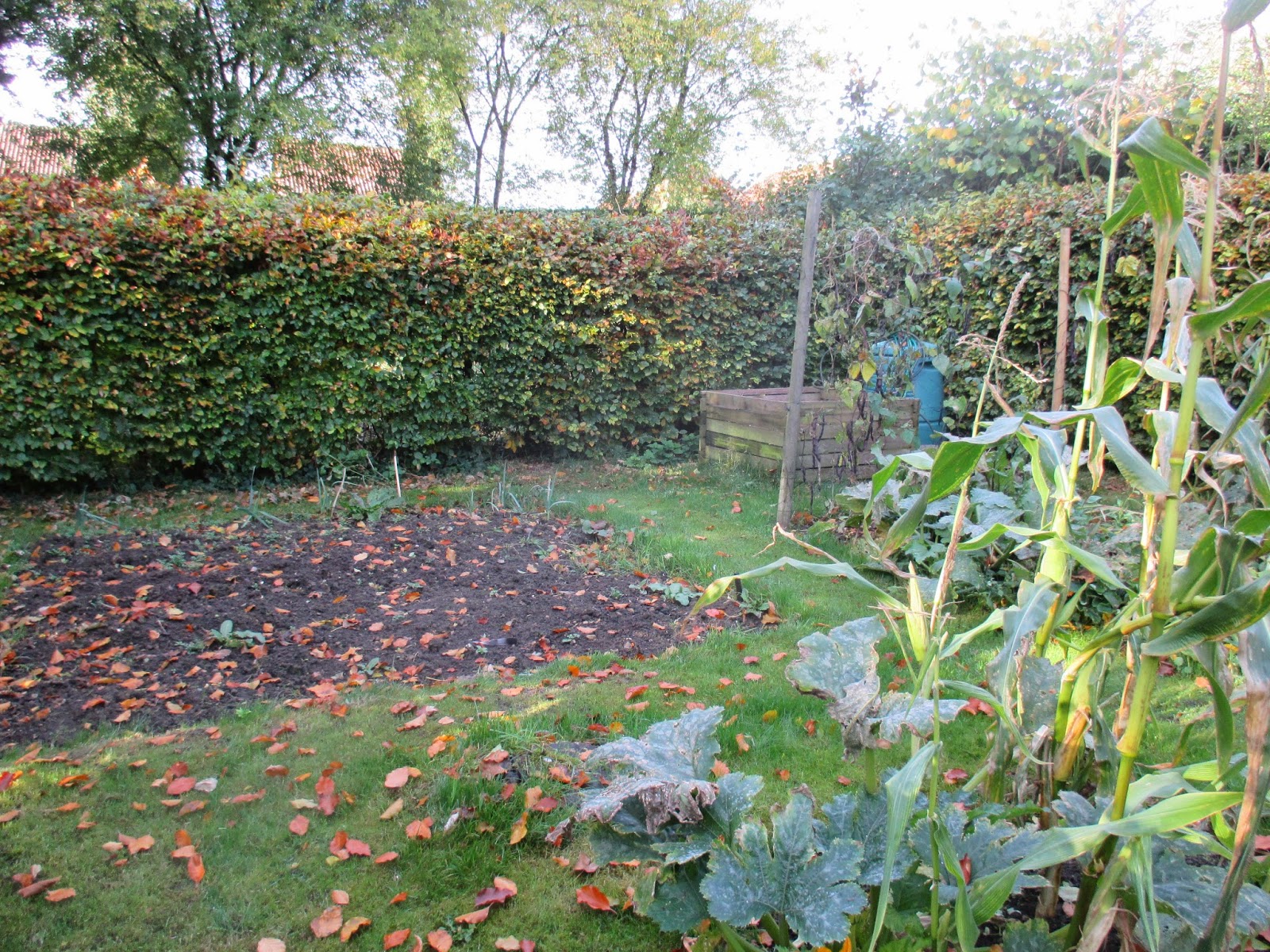 Nothing says 'smug' like trimmed hedges and a cleared veg patch ! 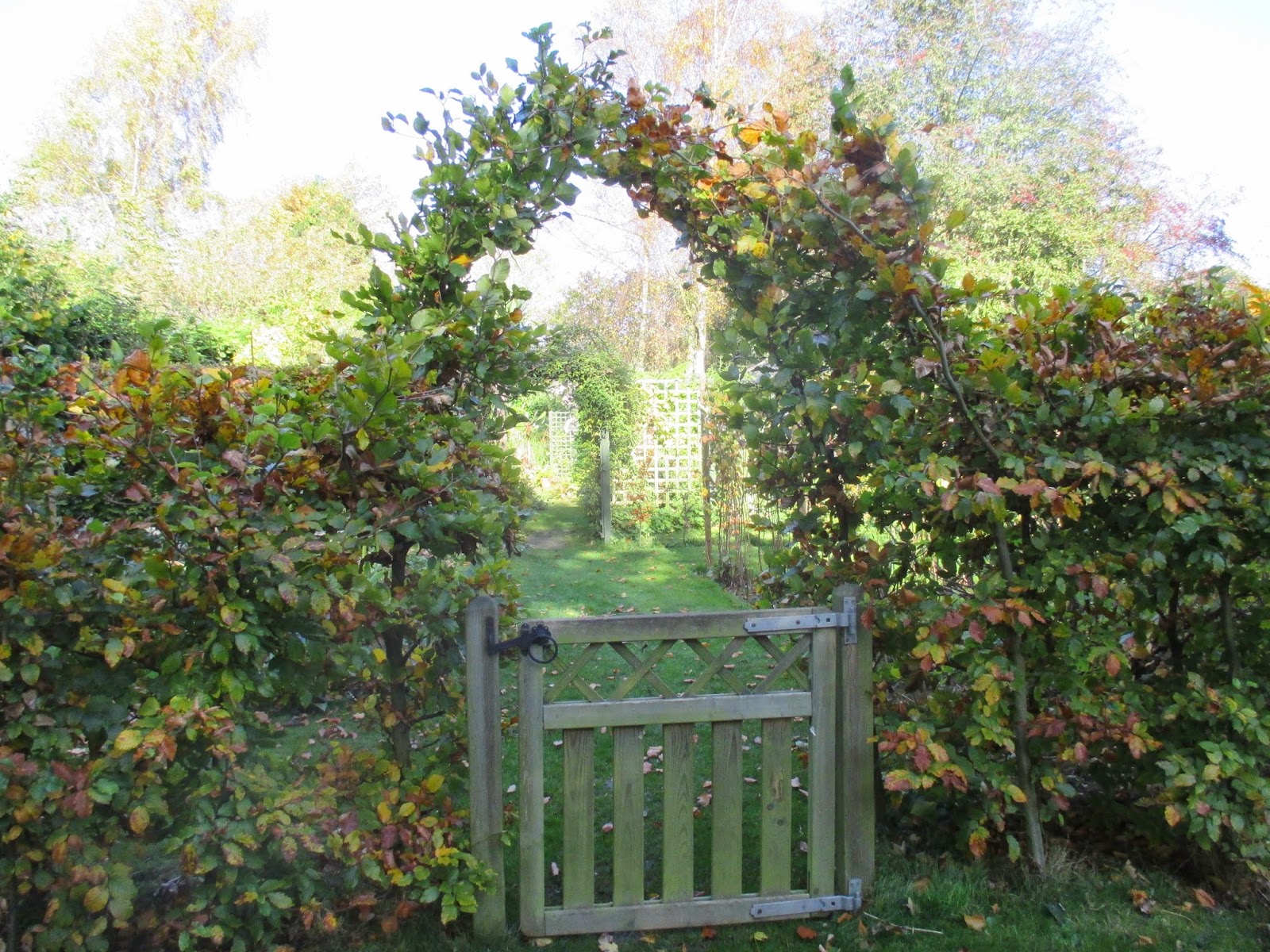 Promise not to snigger... above is the beginning of my beech arch, which has been long in the planning. I have never cut the hedging nearest to the gate and have encouraged it to grow unchecked , in the hope that, when tall enough, it could be formed into an arch above the gate. I had only the haziest idea of how to accomplish this, so when it came to it I had to consult my gardening guru, Google. Google said lots about metal frames and wire and supports which I totally ignored, and I am relying on good old garden twine to bind the whippy branches together to form the shape I want. My assumption is that as the branches age and harden, they will form the arch I want, if I continue to tie in and shape and prune a little. At the moment it is a little lopsided but I am hoping that next season's growth will allow me to even it up. 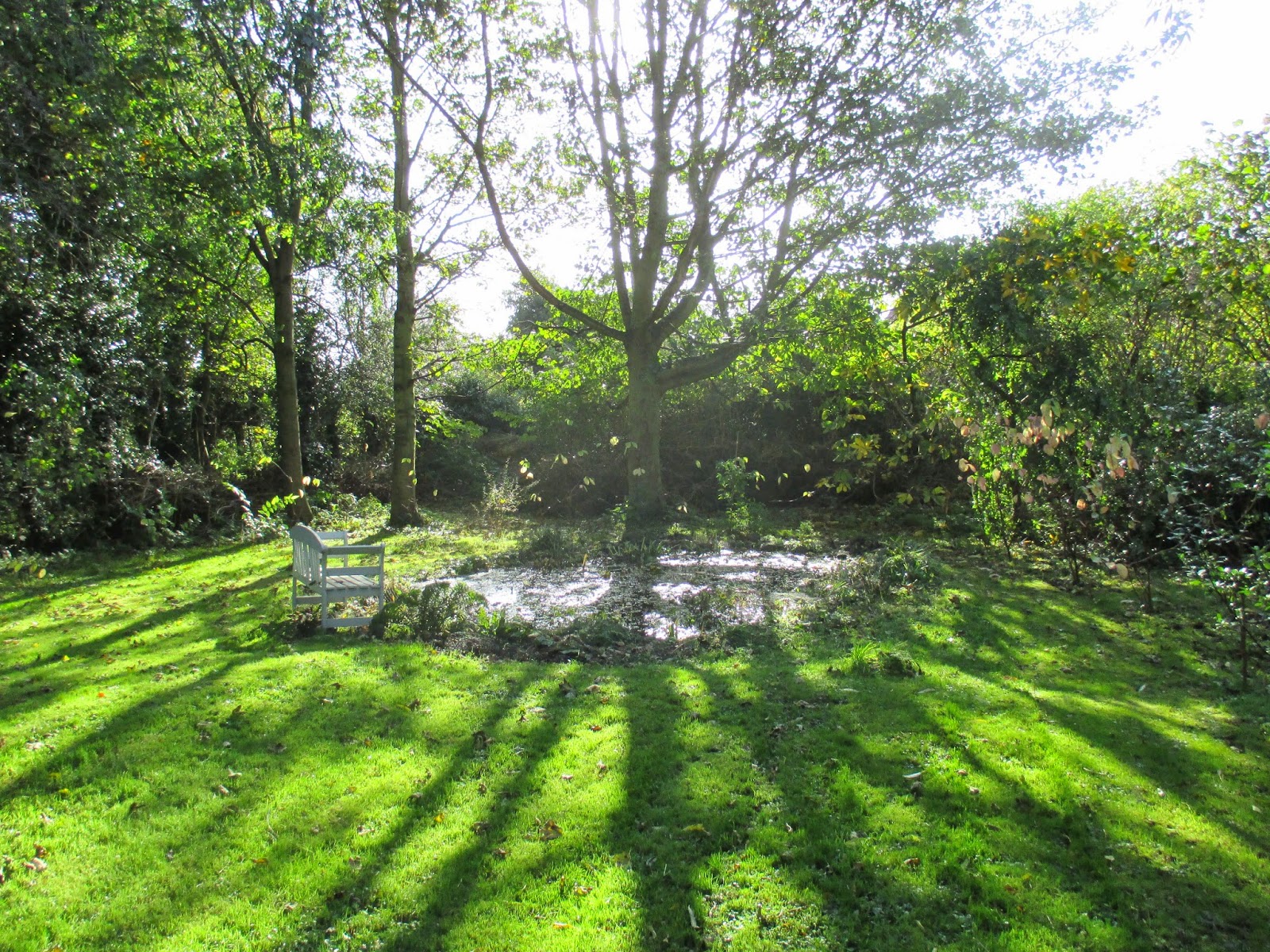 The grass really is this ridiculous emerald green when the sun is on it and I promise I haven't been photoshopping! It is probably the moss and not the grass giving this effect! 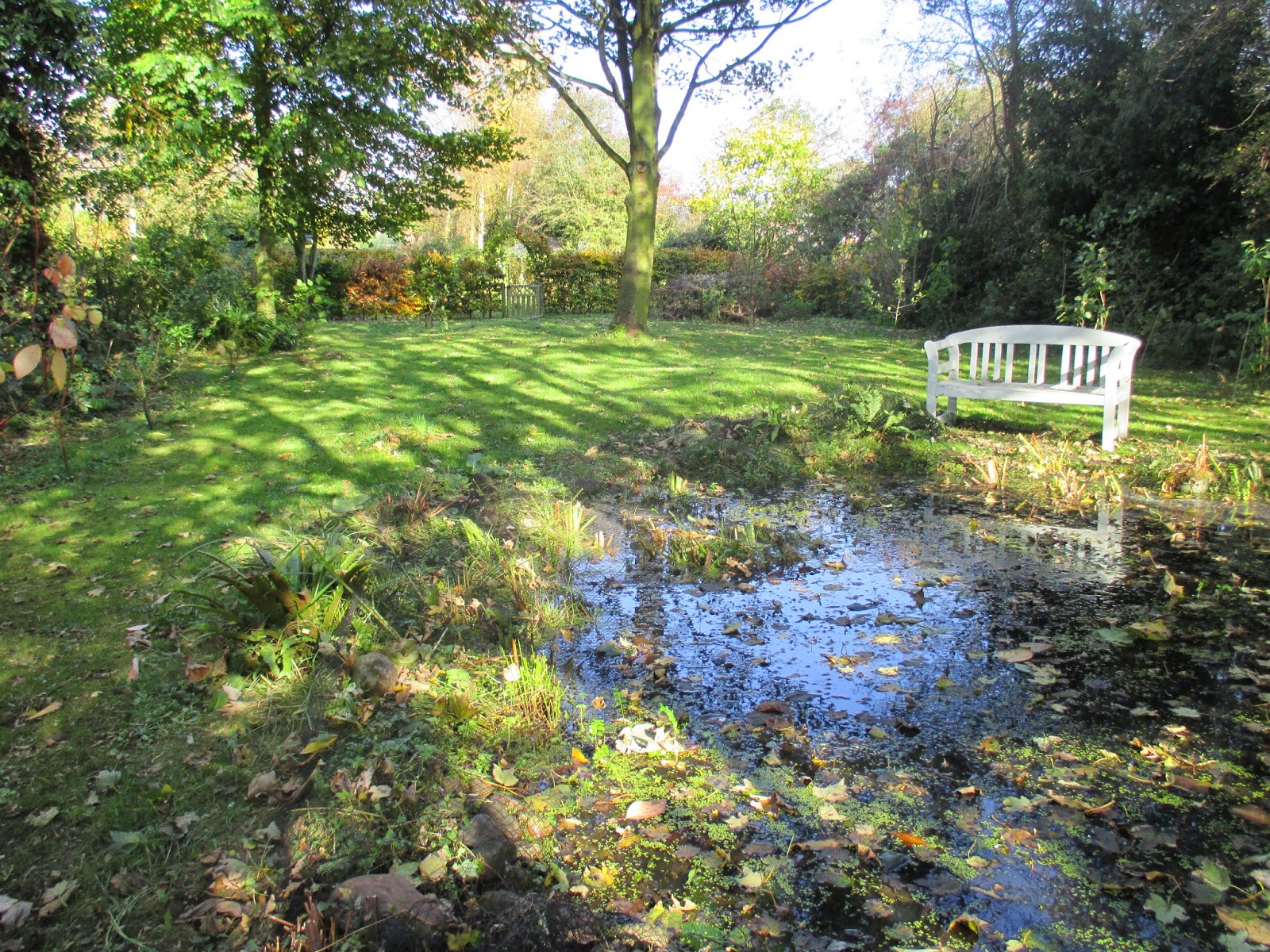 Although it isn't visible, the pond is entirely covered by a huge net to stop the leaves from falling in. We had to cut down all the vegetation in and around the pond before we put it over.
We are trying to open this area up by cutting down some ivy covered elders, to let more light in.

So, there it is, a garden in deepest Lincolnshire, UK, at the end of October, looking more like a summer garden that an autumn one, photographed on a day when it was warm enough to sit outside . What a gift this weather has been, and hopefully it will make the winter, when it comes, seem a little shorter.

This post is part of the 'End of the month view' meme, hosted by Helen, at  'The Patient Gardener'. Many thanks for that, and if you visit, you will find a huge variety of blogs and gardens to visit from around the world.