Is it The Honey Monster ? 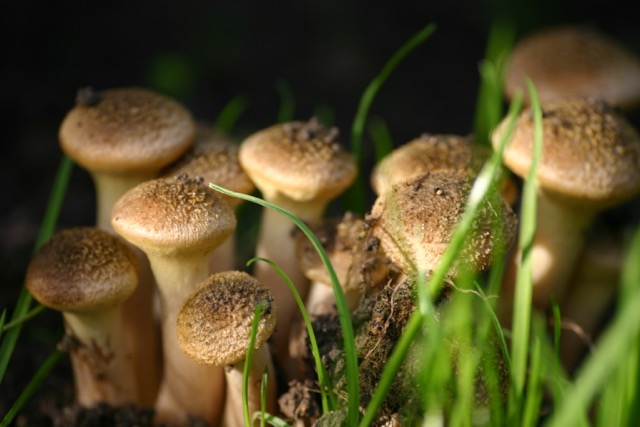 I can think of only a few words which can instill fear into a gardener, but one which causes a frisson whenever it raises its head is 'Honey fungus'. It's right up there with 'Japanese Knotweed' and 'Giant Hogweed'!

We have had a brush with Honey Fungus, twenty years ago, when a willow sickened and died of it, and as inexperienced gardeners, we feared that it would spread to all the other trees and shrubs and kill them off too. It didn't. 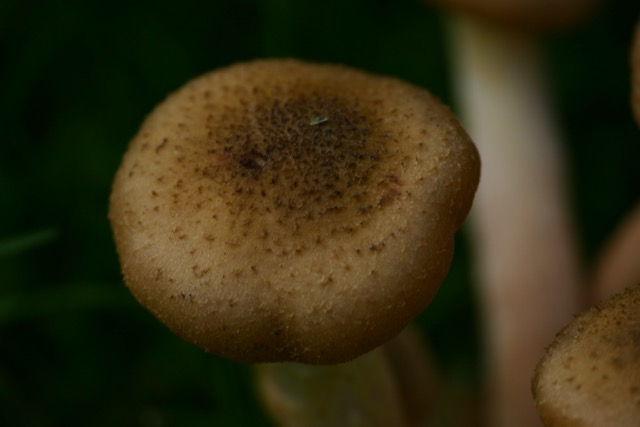 Since then the garden has been, to my knowledge, Honey Fungus free, but I fear that may have changed ...

Mushrooms and toadstools are magic, in that large clumps seem to appear instantly out of nowhere. A whiff of Autumn mist and there they are. One minute there is a sweep of green lawn and the next,  knobbles of toadstools have popped up all over. So, yesterday morning there was, I swear, only one little clump of toadstools, sitting innocently on the grass. I showed my granddaughter and we got the magnifying glass and had a good look at them, and, dear reader, I was not afraid. This morning I found that the knobbles had multiplied throughout the night in a rather sinister way. When I looked at the pattern of the groupings I realised that they ran along the line of the roots of the dead weeping silver birch. Could it be the dreaded Honey Fungus? 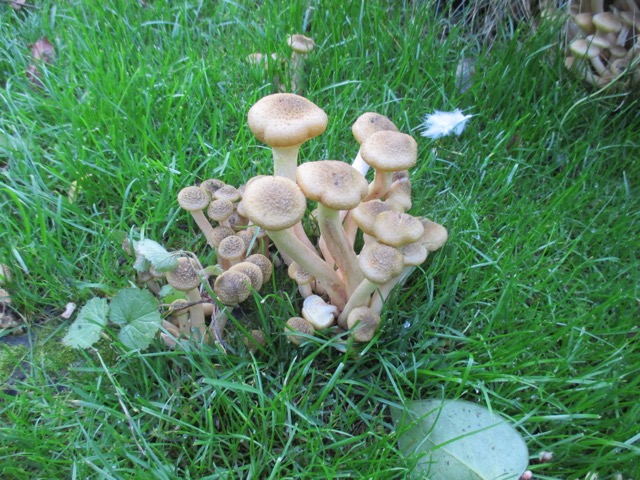 I have posted about the slow demise of our weeping birch before. It was healthy two seasons ago, but last season, it was very sparsely foliated, and the leaves died and fell, very early in the season. This season it had very few leaves again, and they all shrivelled and died after a couple of months. The tree is clearly dying, and shows no inward signs of life when small branches are snapped. 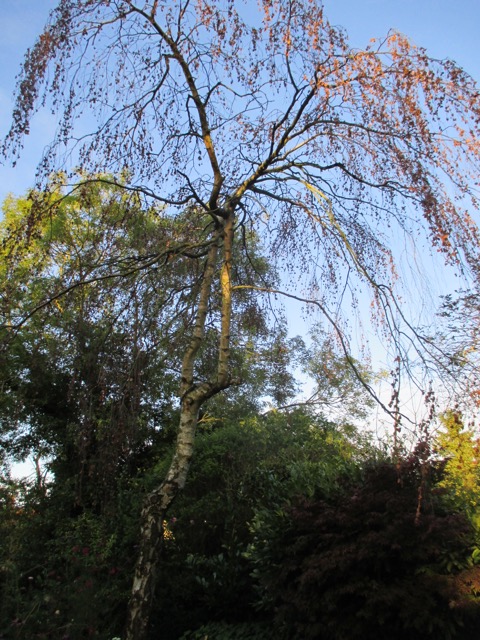 It has been a lovely tree, elegantly casting dappled shade over the lawn, by the pond. It has remained small and well shaped, and those lovely weeping branches have meant that anyone walking by must walk through them. We have had picnics on tartan rugs underneath it, and hung lanterns from it to light our way up the garden. It has been part of our lives for twenty years or more. 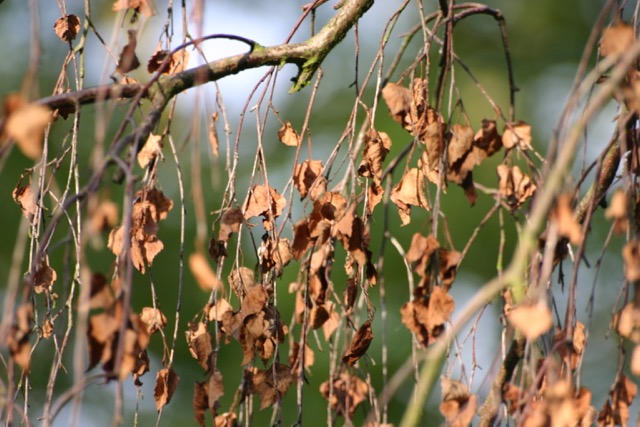 The local birds have loved it, as the two main branches have provided ideal perches from which to survey the world. Usually these perches are home to two wood pigeons , but for a couple of weeks they have lost their place to a humungous heron, which has looked slightly incongruous balanced up there.

The heron has picked the pond clean of goldfish, which must have been easy pickings from that vantage point. 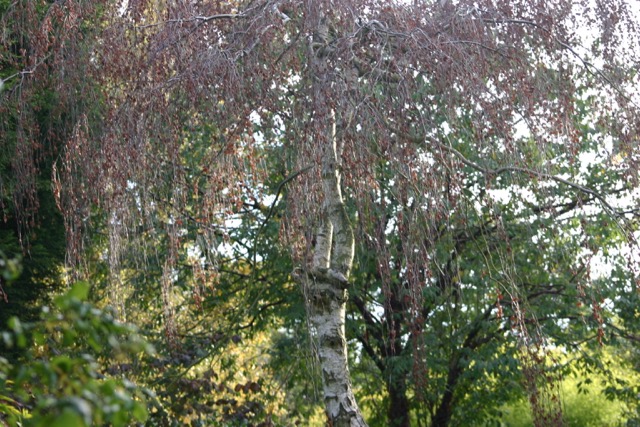 I have been researching Honey Fungus, and I won't bore you with the details, but essentially there are several different types, some of which are scarier than others. However, the management methods seem to be similar for them all, so time will tell which type is lurking down the garden, if any. In essence, there is little to be done, other than the immediate removal of the afflicted tree and roots of possible. I assumed that the toadstools themselves were the carriers of the Honey Fungus spores, but it seems that they are mainly indicators of their presence. They should still be gathered up and preferably burned.  There are those who advocate stump grinding but opinions are divided, and the majority seem to suggest that it makes no real difference. 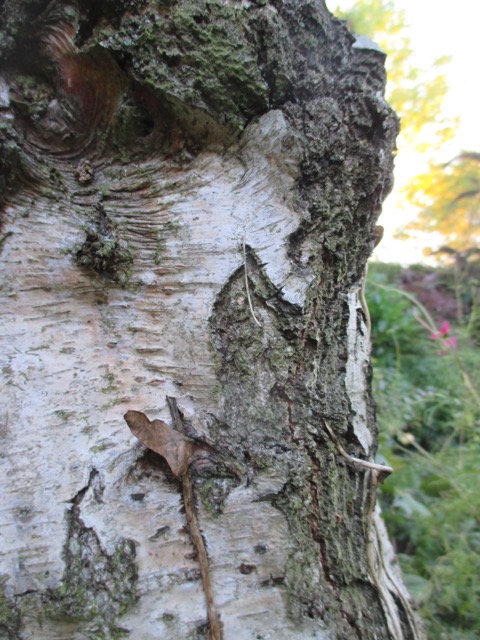 Honey Fungus affects trees and shrubs when they are stressed, and if healthy , they are capable of shrugging off the spores, but if stressed by disease or extremes of weather, they may succumb. 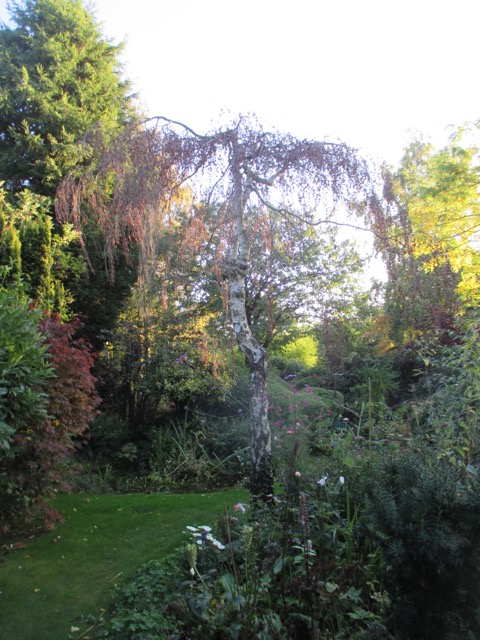 I am unsure whether our birch has Honey Fungus or not, as the real diagnosis lies in the thin white sheath, (Mycelium), which lies under the bark, and the 'bootlaces' (Rhizomorphs) around the roots. As we do not know yet what lies beneath, it is impossible to say with any certainty if we have Honey Fungus, or something much more benevolent. I welcome advice from any wise gardeners out there who have advice to share. I have tried to match my photos with various Google images, but it is fairly inconclusive. My feeling is that we proceed as if we have it, to be on the safe side.

So, we have organised to have the weeping birch felled, and hopefully this will happen next week
It will be a sadness to see it go, but it is clearly beyond saving. 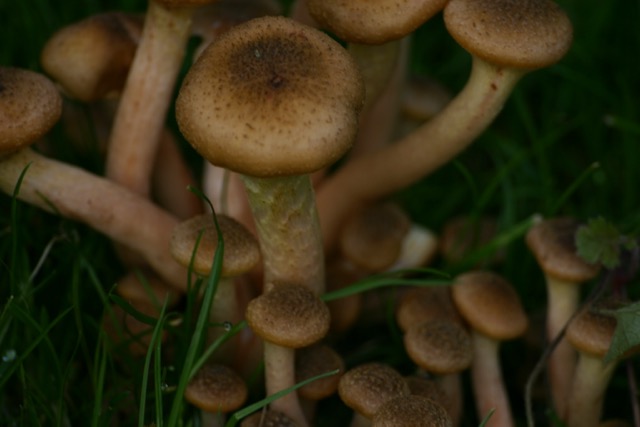 If we get a positive diagnosis, then we just have to hope that it will not spread to anything else in the garden, and I guess all we can do is to try to keep everything as healthy as we can, and to minimise stress in whatever way we can. 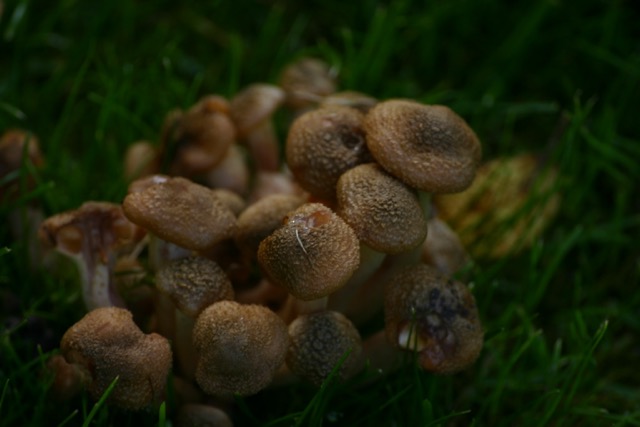