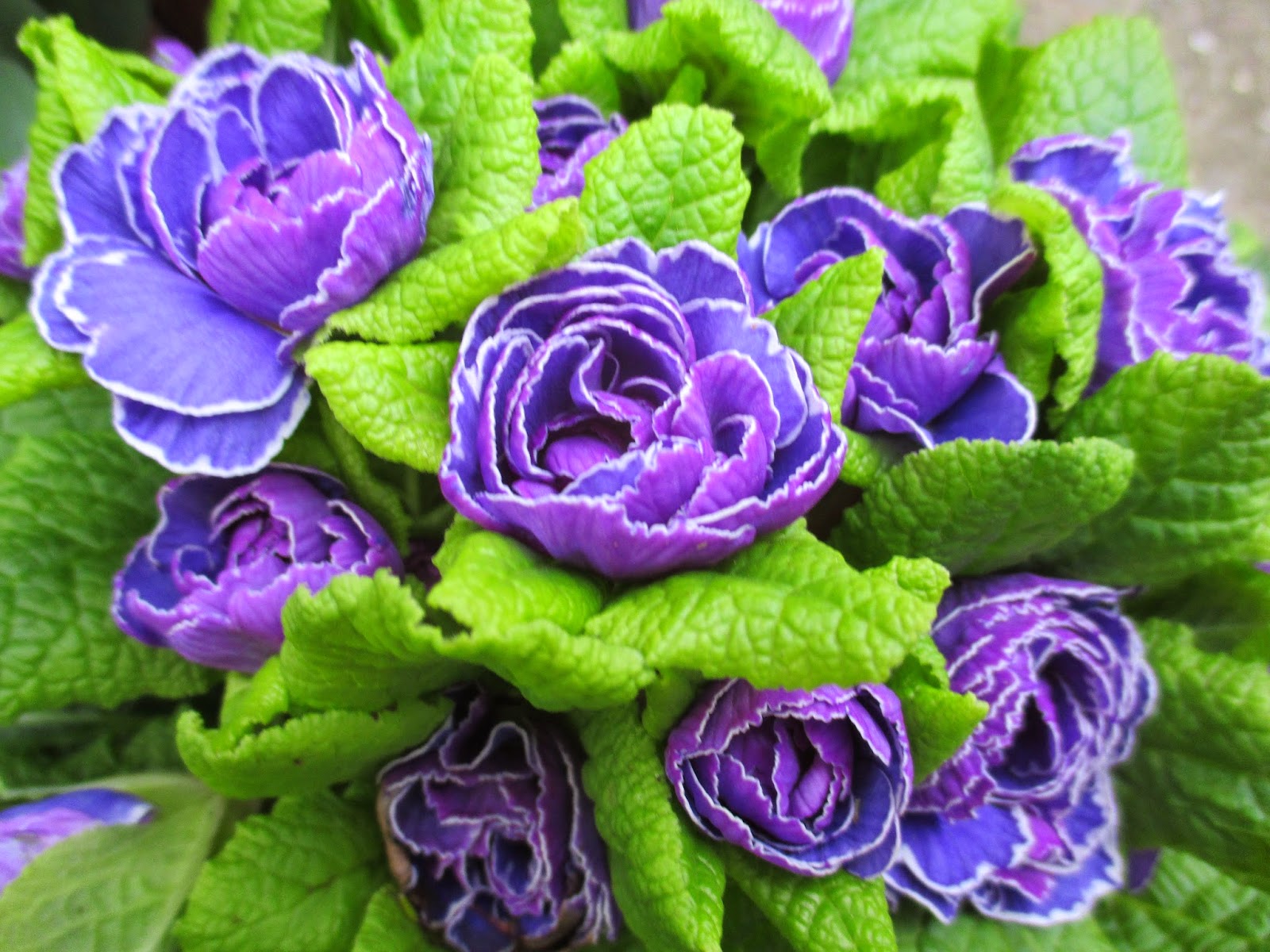 March can be cold beers in the summerhouse, or howling winds, and there have been precious few cold beers drunk this month ! The winds today have been strong enough to blow lorries and trees over, causing the bridges over the Rivers Humber and Ouse to be closed at the same time, making travel around our region difficult.

This March has been a cold, grey month which seems to have slowed down the ticking of the time bomb which is spring. To be honest, it feels as of nothing much is happening in the garden at the moment. Yes, there are patches of welcome colour from bulbs, pulmonaria, hellebores etc, but the stalwarts of the spring garden, Flowering Currant and Kerria Japonica  remain in tight bud, whilst the Forsythia has only opened its flowers over the last couple of days . There are some small benefits to this cold month, however, such as very little weed and grass growth, but spring is definitely dawdling along and dragging her heels.

Even the seeds grown in the warmth of the propagator and conservatory seem to be slow to germinate and to grow, perhaps due to lower light levels than usual? I'm not sure. Sad soul that I am, I have kept a journal every day for the past thirty years, and each year I record the first day I see the leaves of the Hawthorn unfurling, and the first day there is frog spawn in the pond. Both these events are two to three weeks later than they were last year. 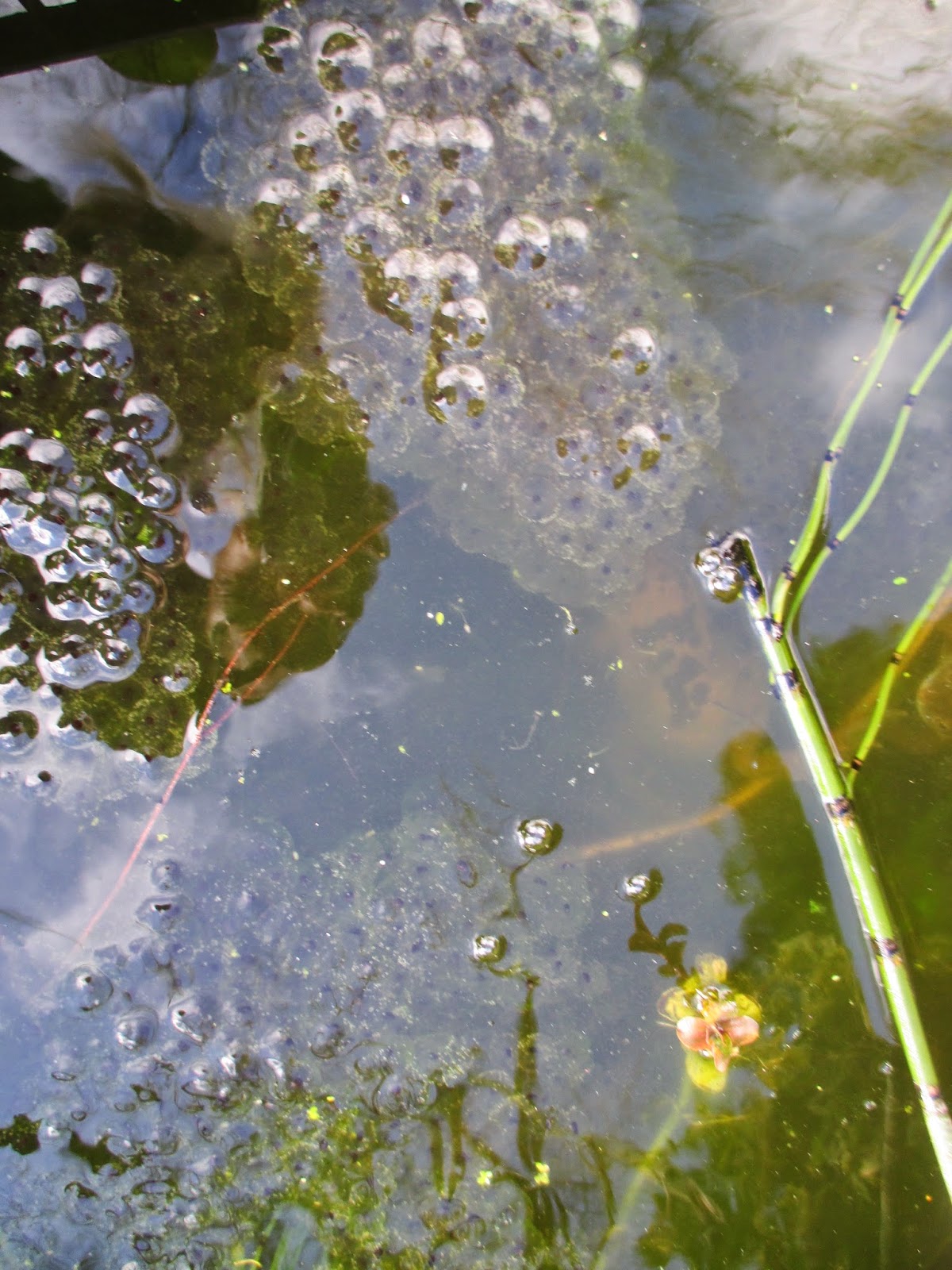 Despite the lack of plant - action in the garden so far this season, we have not been idle. Today we were out in torrential rain planting thirty bare root beech hedging whips. Not pleasant conditions to work in, but essential, as the whips had been sitting in a bucket of water for three days since they were delivered. The area had to be cleared of ivy and debris before we could start planting the new boundary hedge and we also replaced five dead plants from hedging we planted last year. 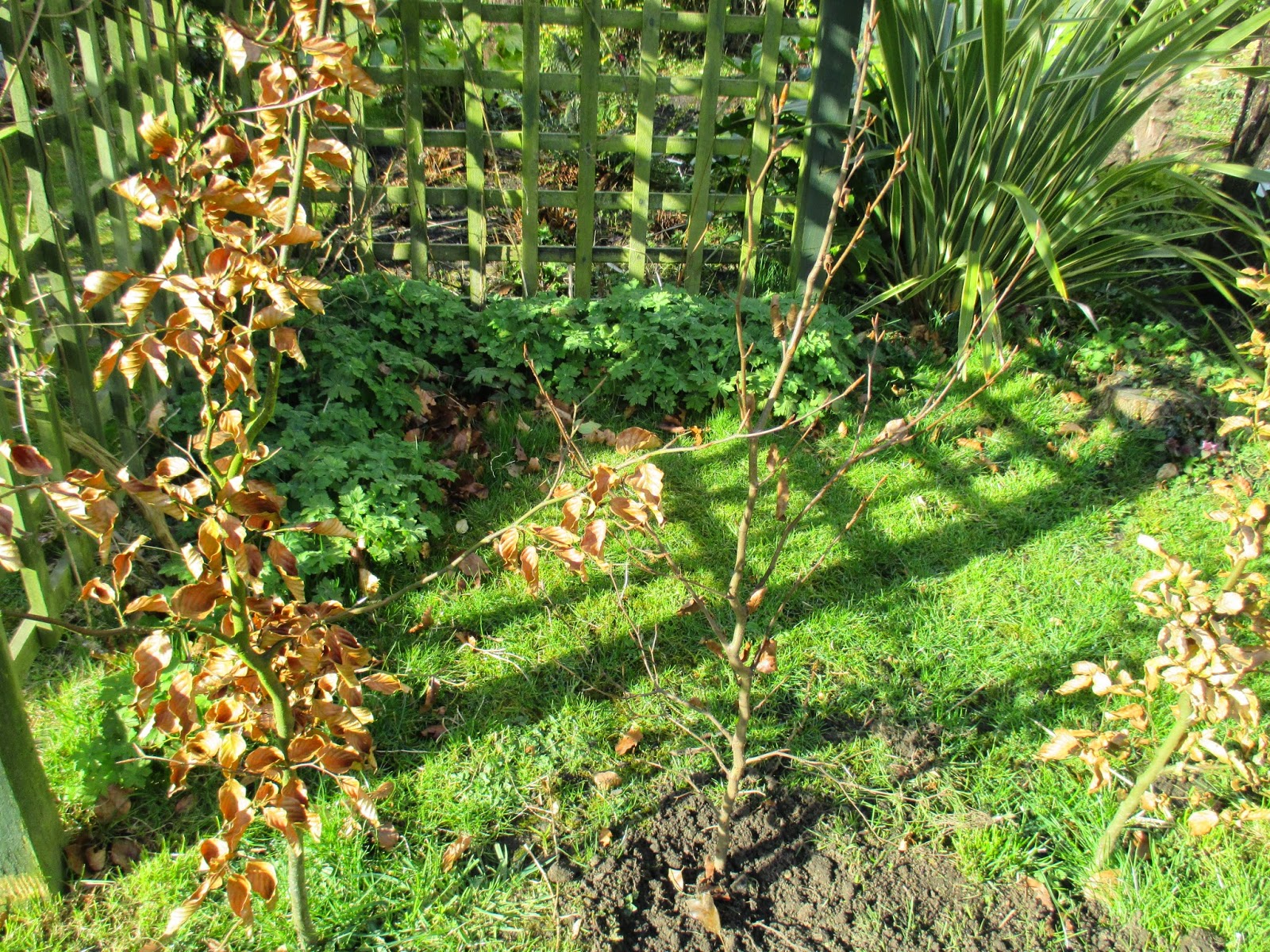 Life is slowly returning to the ponds, but the water is still icy cold and boiling with frogs, which have laid many clumps of spawn in the shallows. Some marginals are beginning to grow, and the Marsh Marigolds are now in bud. Cowslips are flowering at the pond side  but there are no primroses yet in evidence. 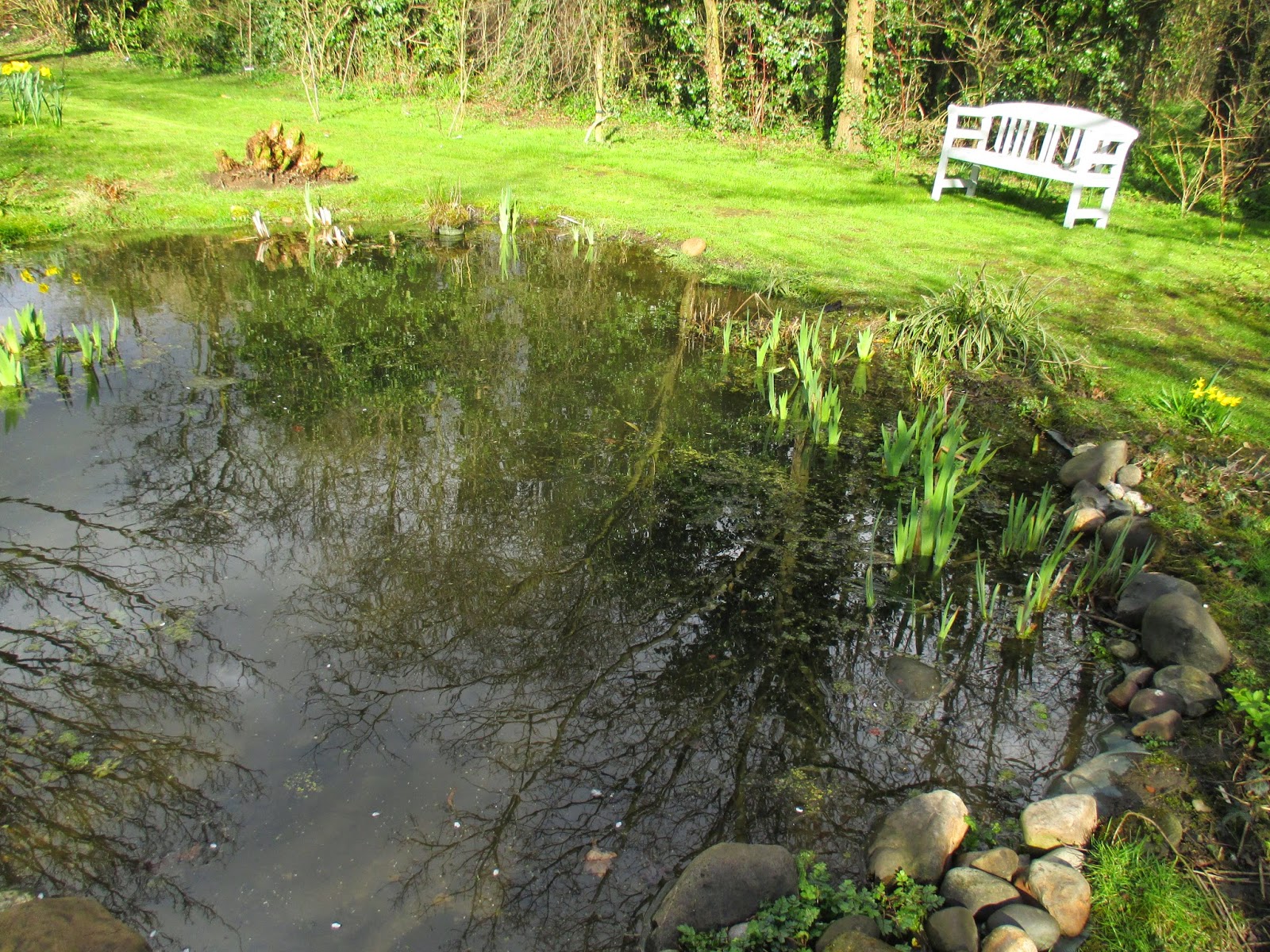 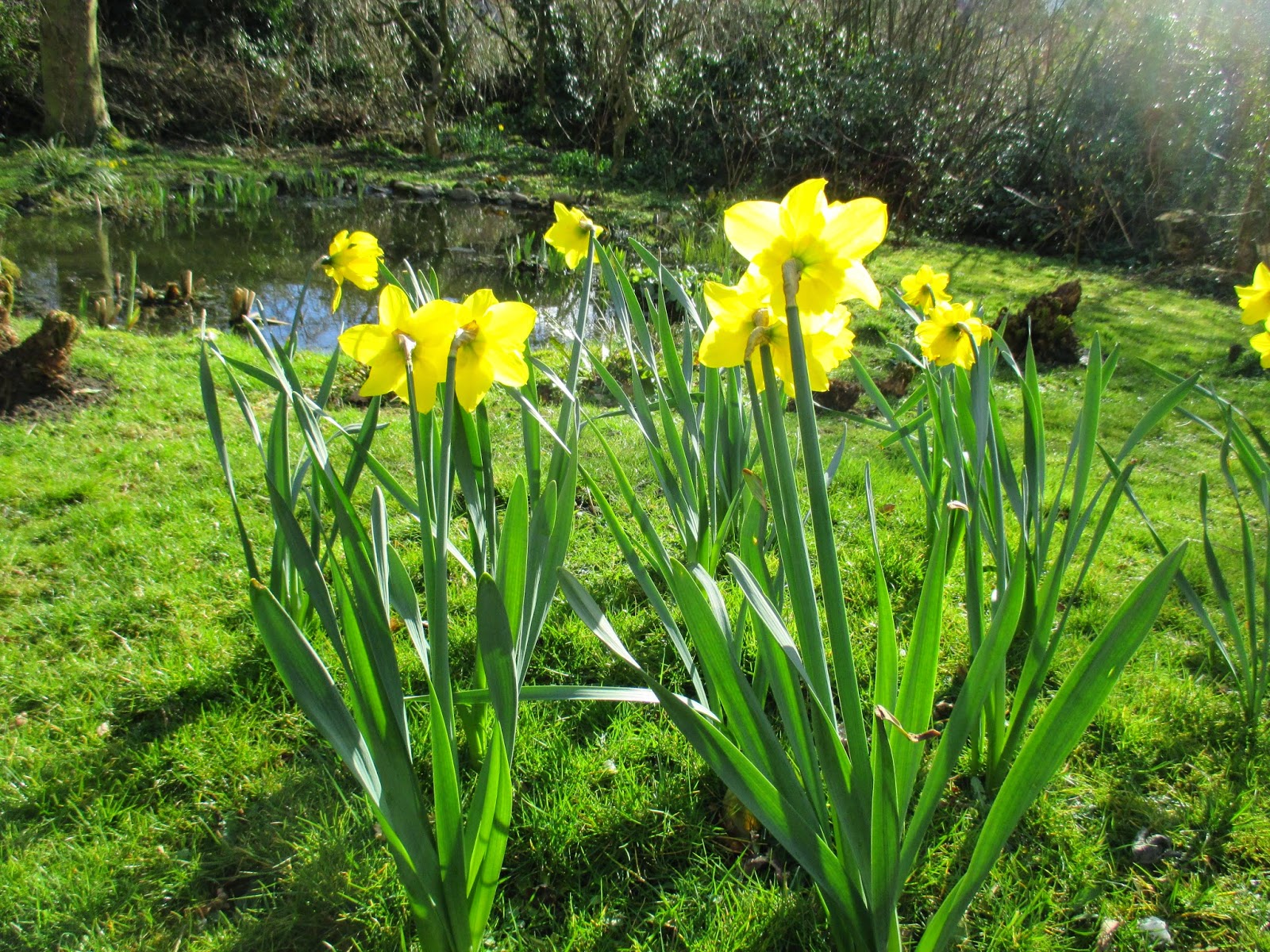 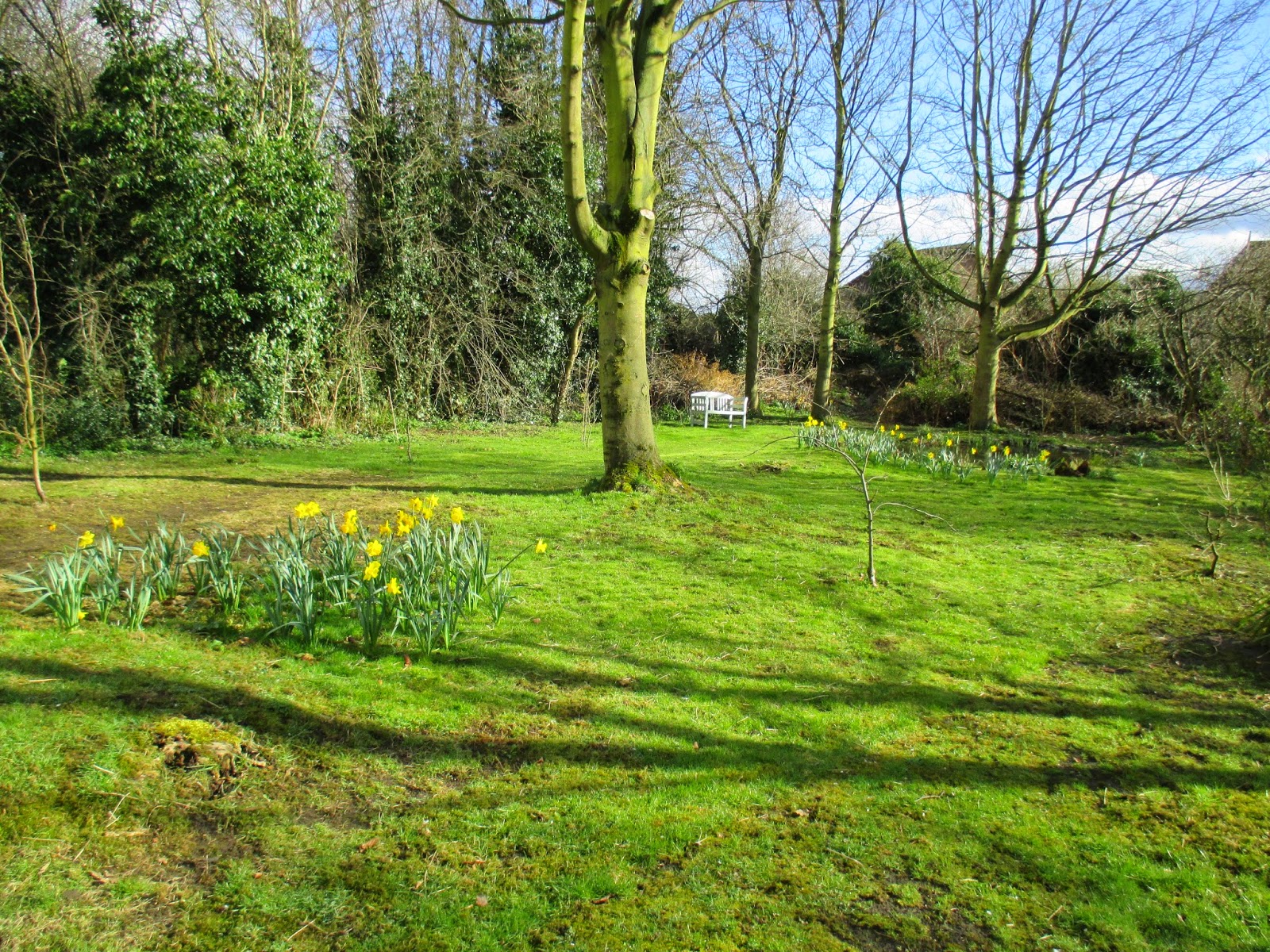 The moss... erm ... grass is a bright technicolour green at the moment, and will need patches of re-seeding when the weather warms up, due to wear and tear.

The veg plots are all dug over, in readiness for planting when the soil warms up. Folk lore has it that Lincolnshire farmers used to test the soil temperature, in readiness for planting potatoes, by taking down their trousers and sitting down on the ground, on their bare bottoms! If it felt cold then it was still too early to plant ! Not a custom I think we will be reviving! 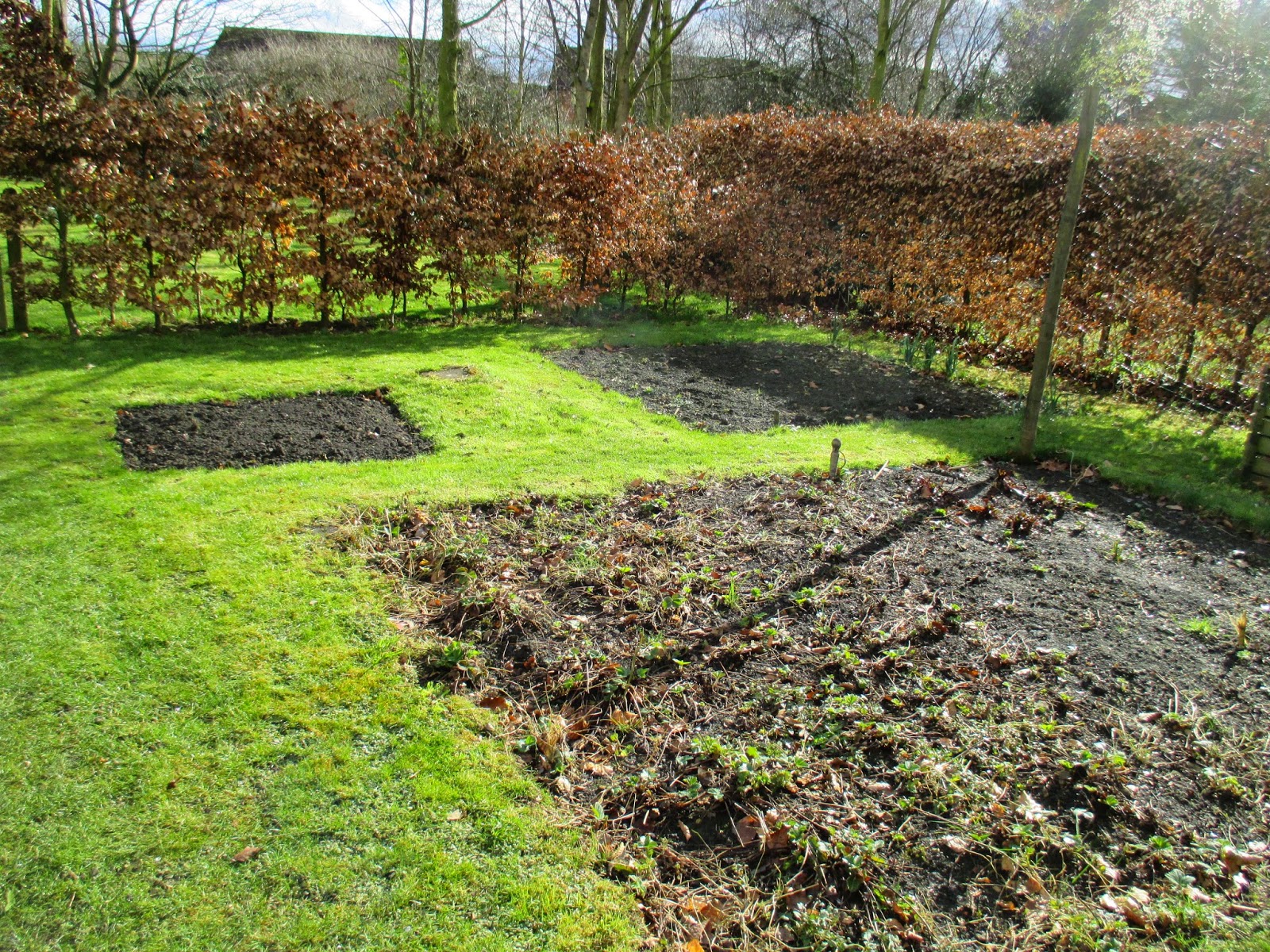 The leaves on the raspberry canes are just beginning to open. 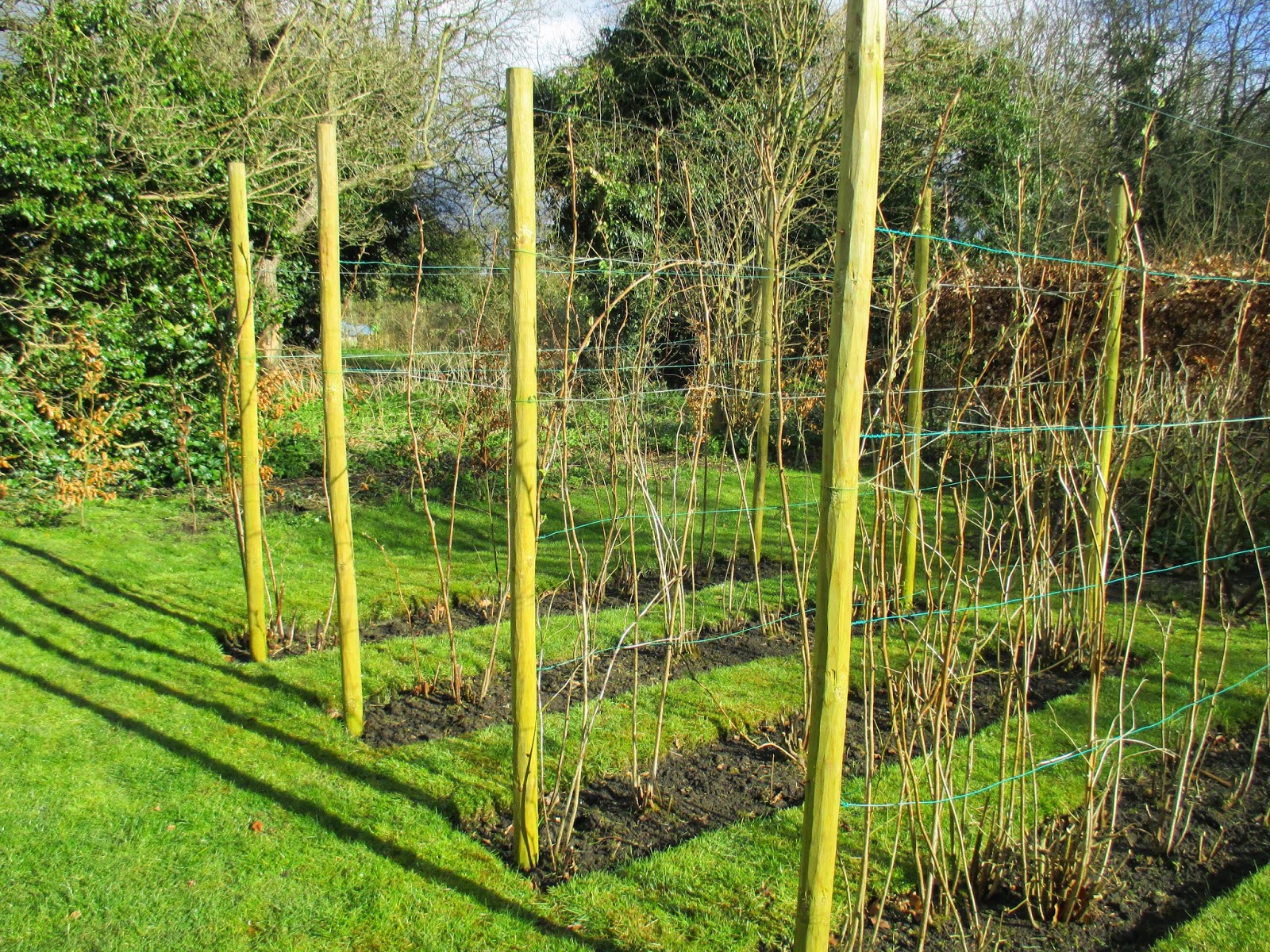 The sub tropical garden is always late into growth, but the early signs are good that everything has made it through the winter. The Eucalyptus Gunii, moved in the autumn, has survived, and is coming into leaf, and the Tetrapanax looks as though it has weathered all the storms. Because we have had such a mild winter, we do not appear to have lost any of the more tender plants, that have overwintered in the greenhouse, or been protected in situ. 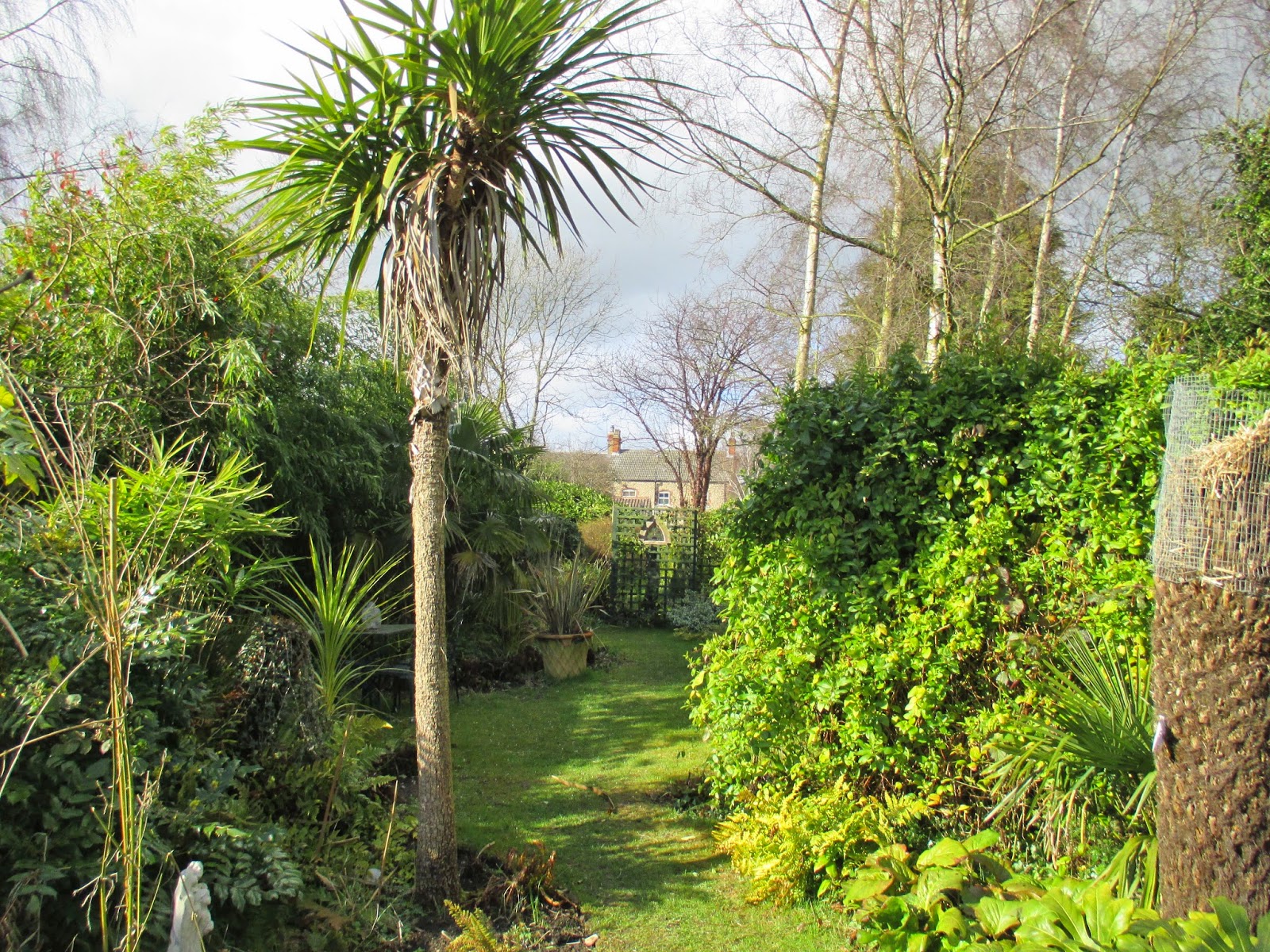 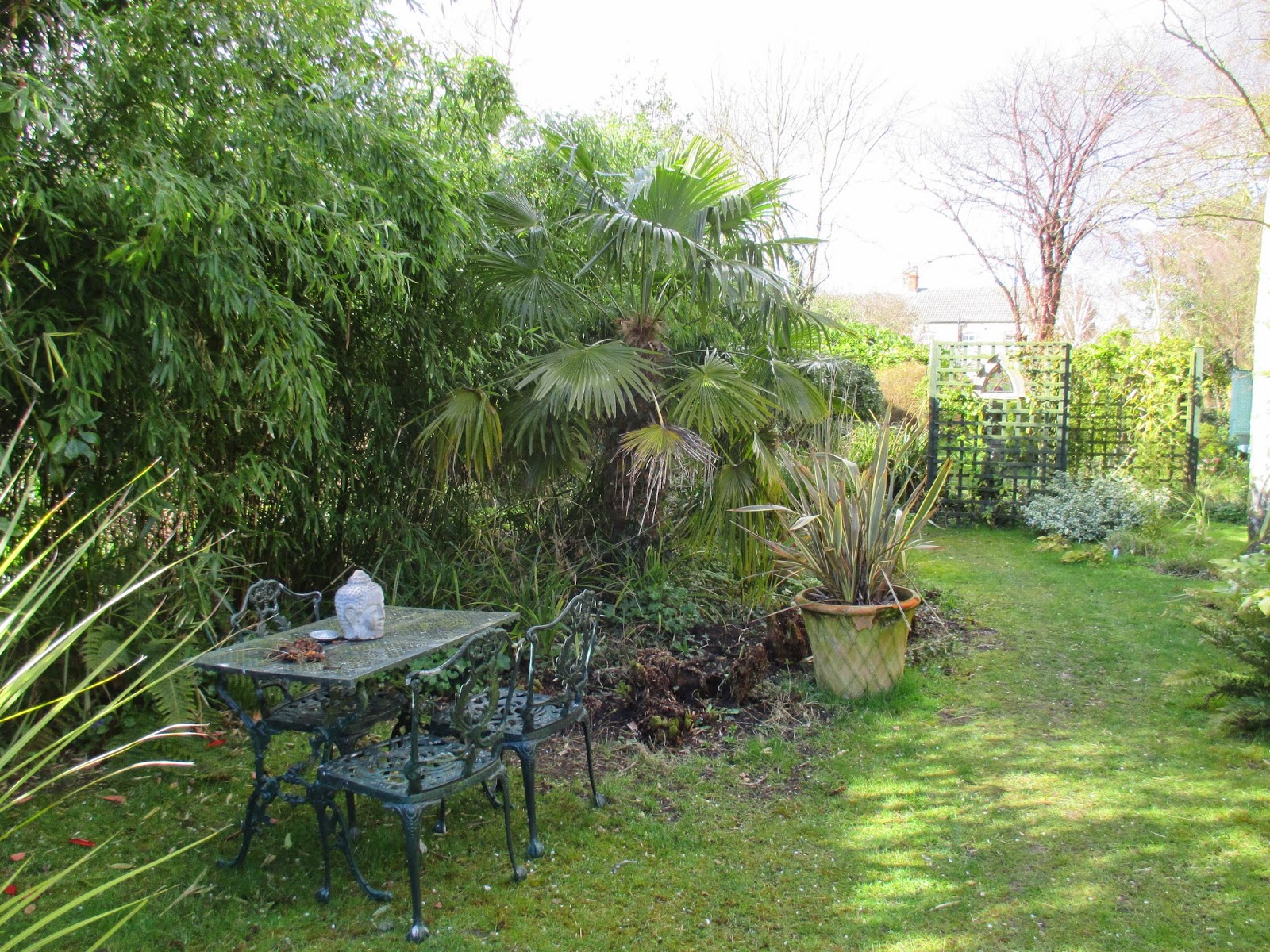 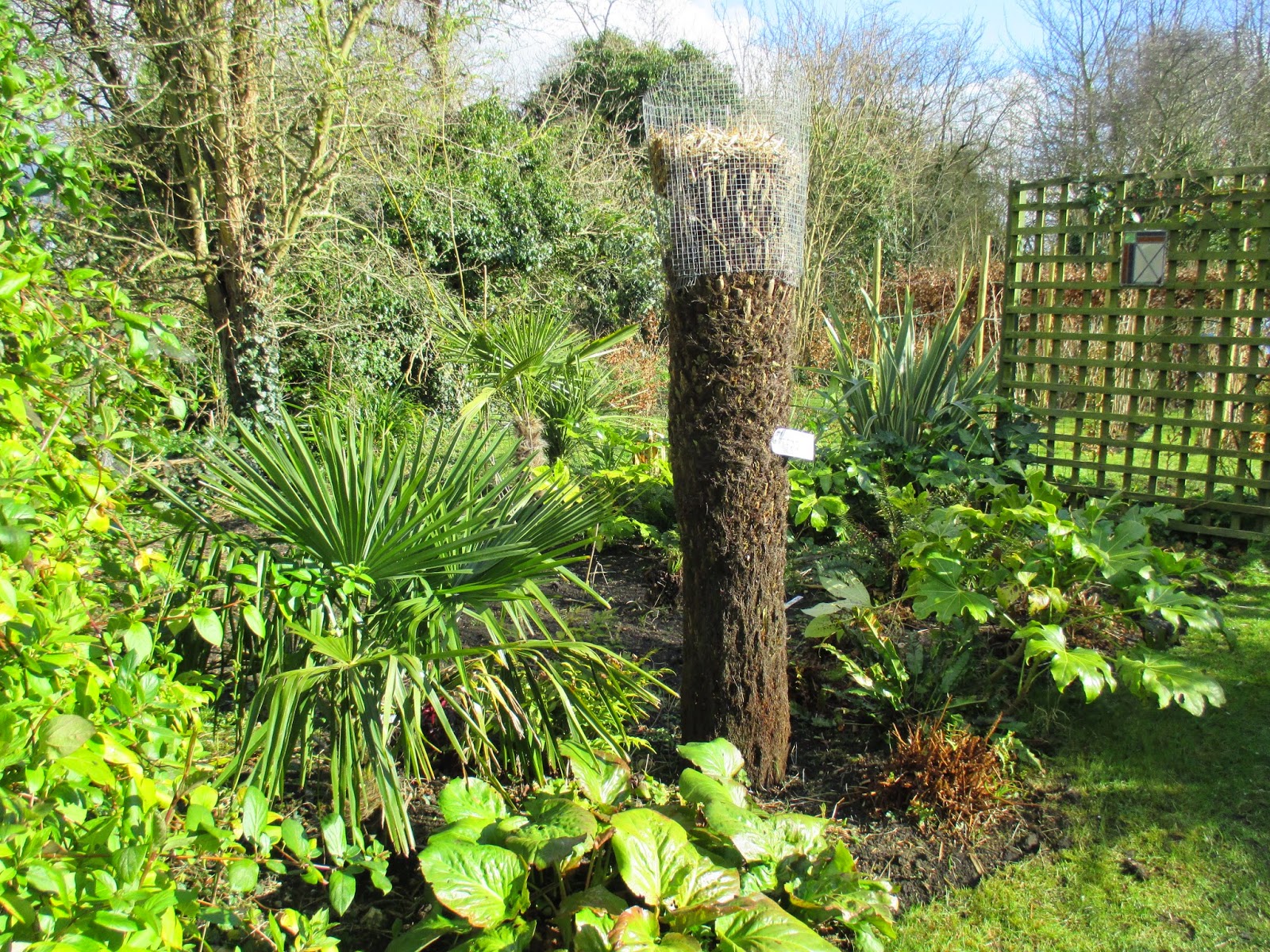 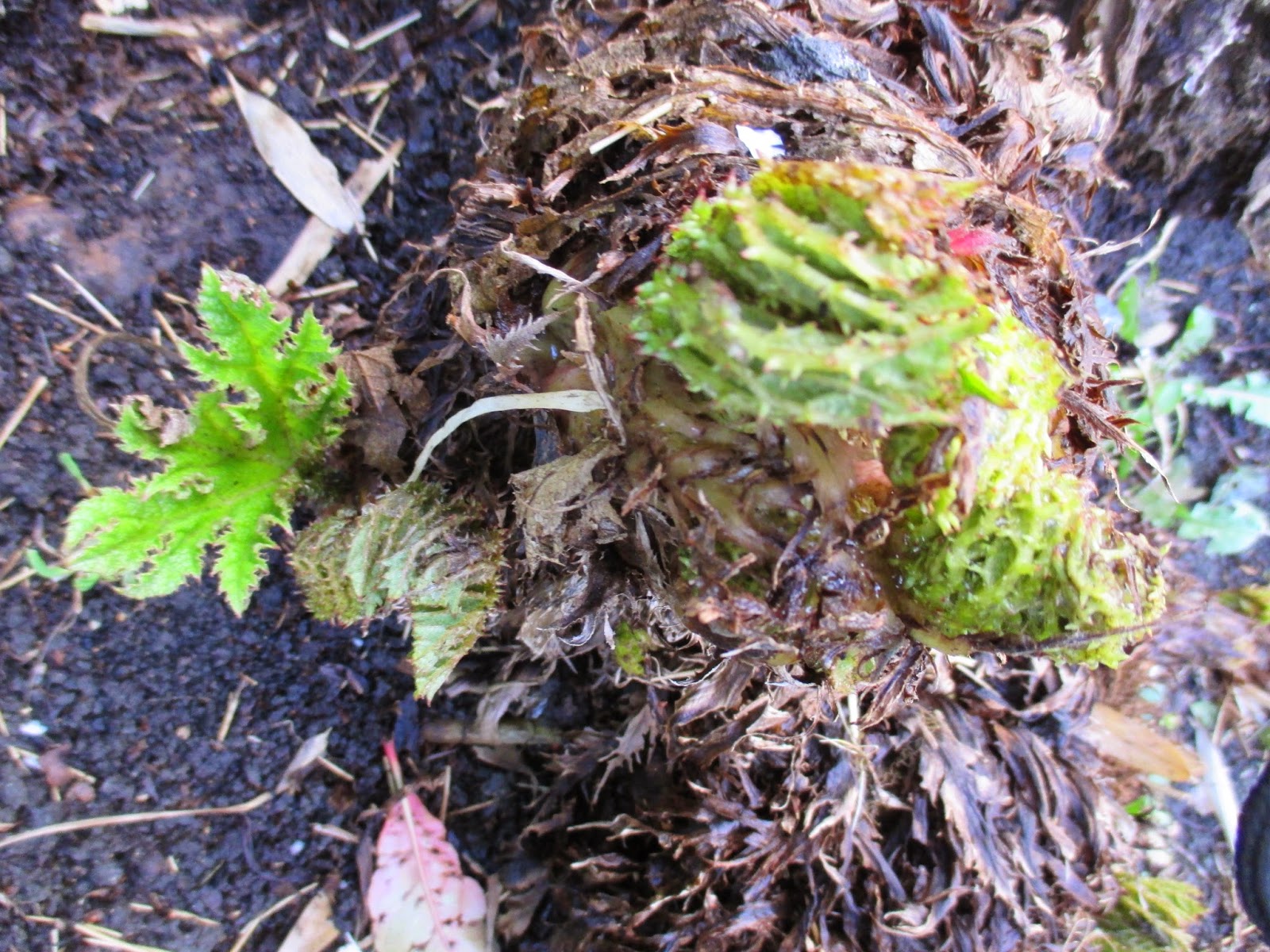 The Gunnera is just beginning to wake up and put out relatively small new leaves, which will become enormous as the season progresses.

There is new growth on all the roses, which is most welcome, and it began much earlier in the year. All have been pruned recently. The rose photographed has a beautiful red edge to every leaf (wish I could remember which one it is!). 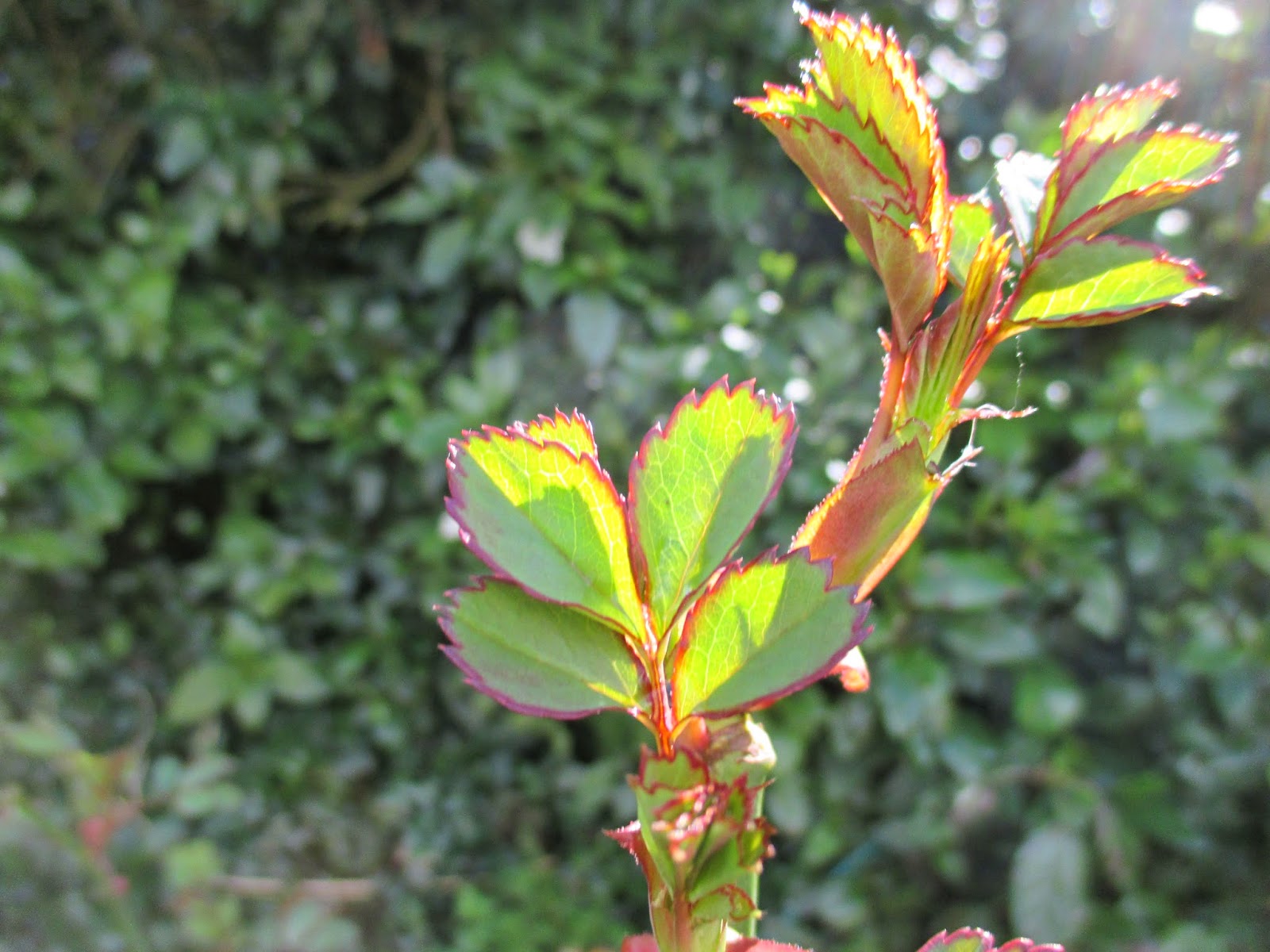 I have planted up a new bed, since we had a large prostrate conifer taken out at the end of last year. It has been a pleasure to have a new space to fill, rather than having to shoehorn new plants in to existing beds. I have planted roses 'Boule de Neige' and 'Absolutely Fabulous'; Euphorbia 'Ascot Rainbow'; Digitalis Illumination 'Raspberry; Hellebores 'Christmas Carol', 'Rose Green' and 'Joel' and I will fill in any gaps with annuals later in the year. I intend to shape the self seeded,  double stemmed holly into a single stemmed, formal ball. 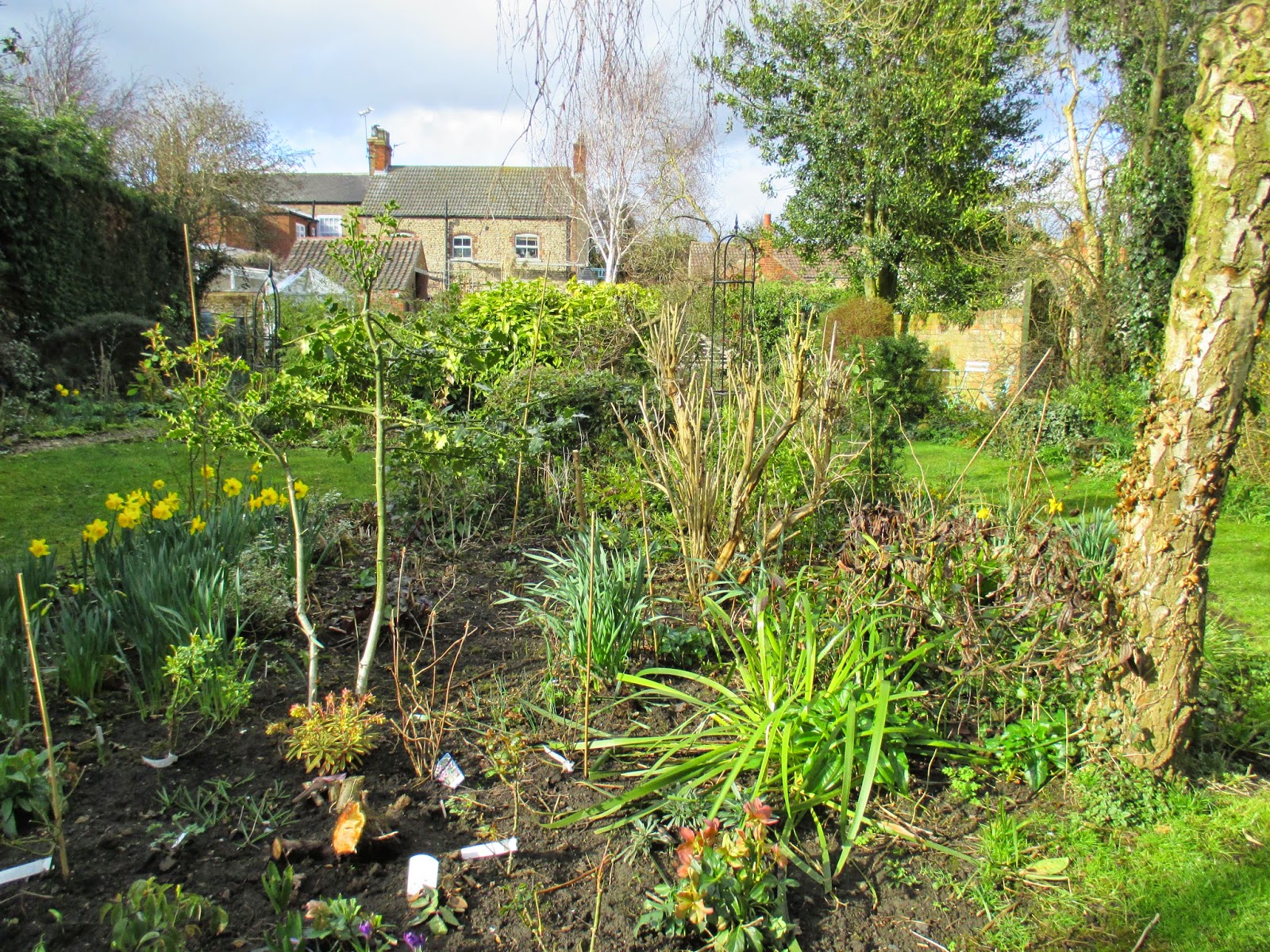 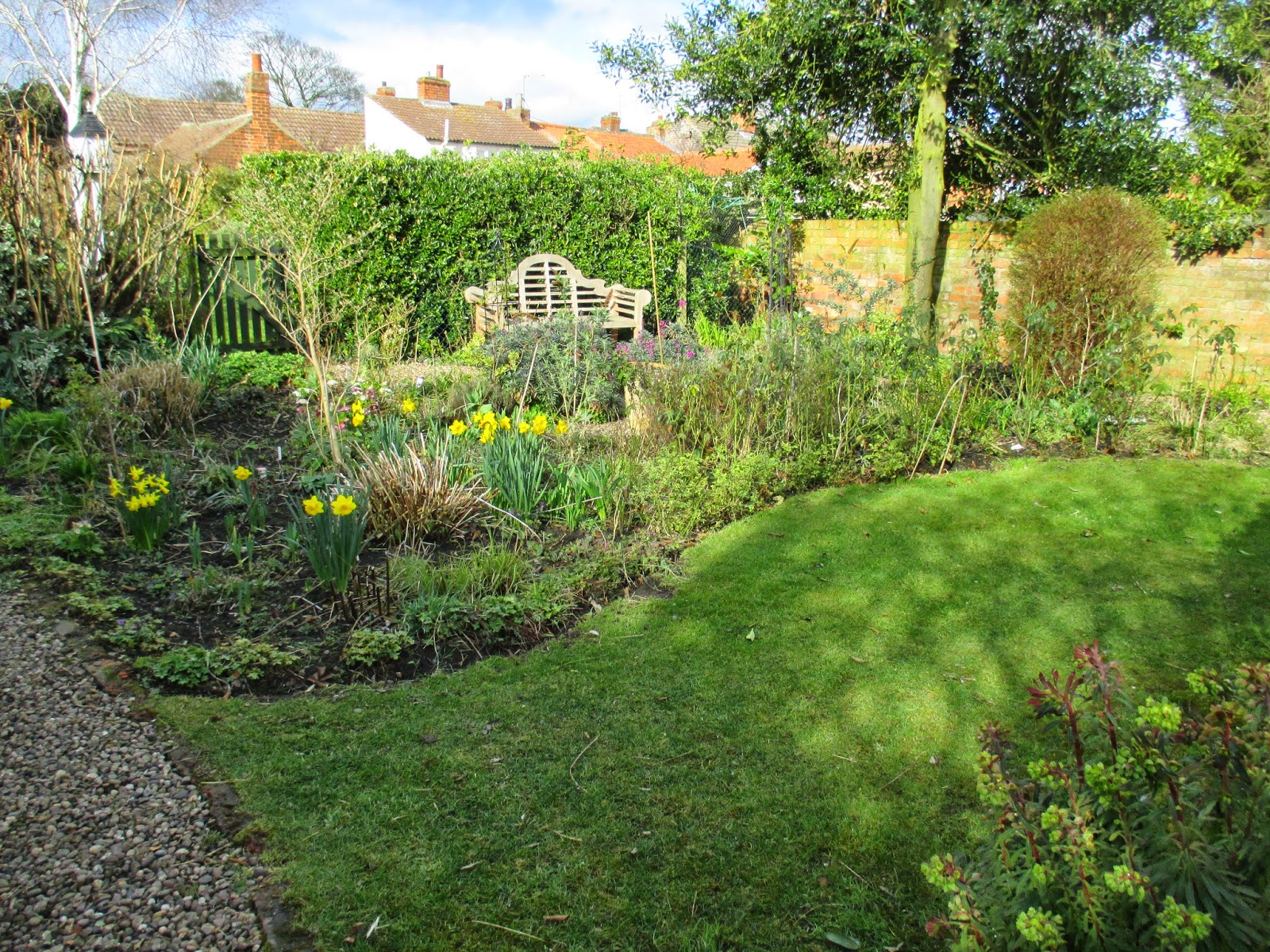 Other beds are showing some colour and new growth, especially from some perennials like delphiniums and Aconitum. I always think Aconitum gives real value for money as it is one of the first perennials to show, yet it is one of the last to flower, and then to disappear. 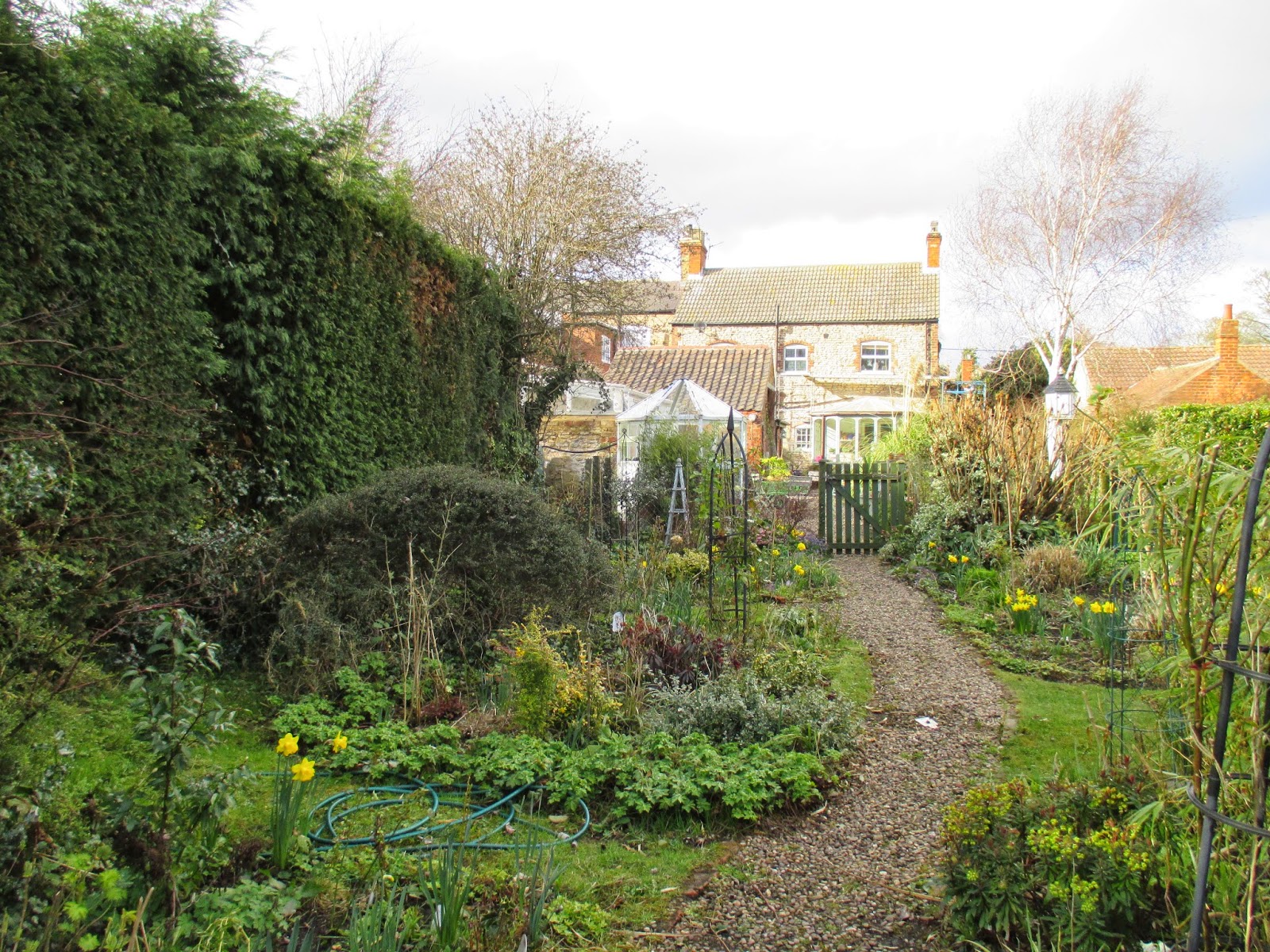 The greenhouses are full to bursting at the moment, and we are in the process of sourcing some cold frames to relieve the pressure. Both are unheated so anything requiring warmth is kept in the conservatory - which is also fit to burst! The cold greenhouses are housing potted up dahlias, various newly planted perennial bare roots (including day lilies, irises, Echinacea, Kniphofia, Gypsophila ), and newly rooted rose cuttings. From collected seed I am growing perennial sweet peas, annual sweet peas, Ligularia, Agapanthus, Hosta, Helichrysum  as well as lots of overwintering Penstemon cuttings. Although things are growing they do not seem to be growing away very strongly at the moment.

Clematis Armandii is in full flower, as our pots of bulbs such as hyacinths, daffodils, Snake's Head Fritillary and primroses. I have some of the Thompson & Morgan doubles, and they are gorgeous, as well as the double 'Miss Indigo' (see blog header photo).

In the conservatory are lots of seeds and seedlings. The dahlias ('Giant Hybrids' and 'Bishop's Children') are doing well, but others, like Coleus are sulking quietly. I am also growing about half a dozen varieties of tomatoes and chillies; peppers; aubergines; bananas (don't ask!); Melianthus Major; Tithonia; Zinnia; Cosmos; Nasturtium ('African Queen'). 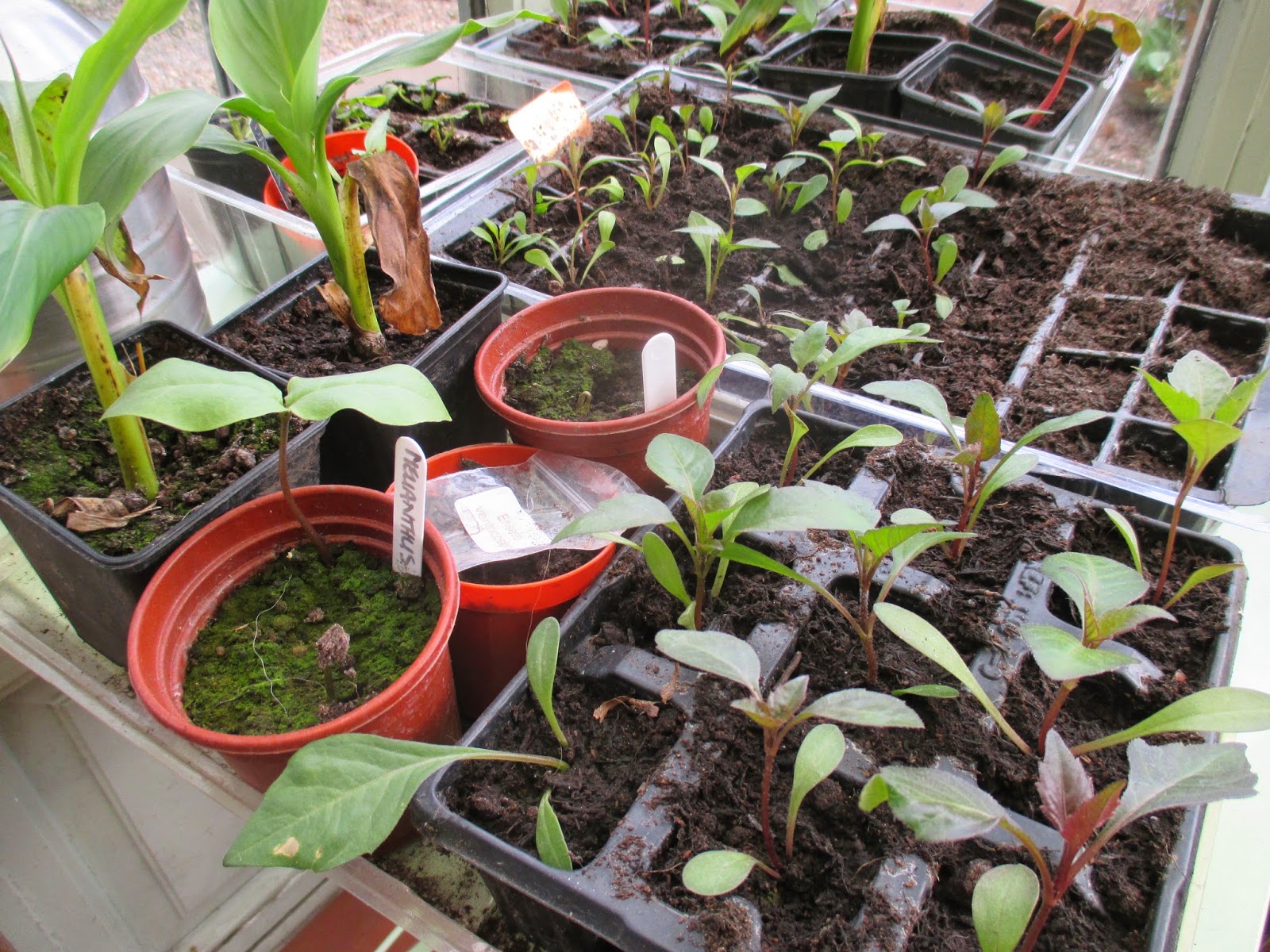 This post is part of the 'End of the month view' meme, hosted by Helen , over at  The Patient Gardener, so do take a little trip over there !