A touch of the Roald Dahls... 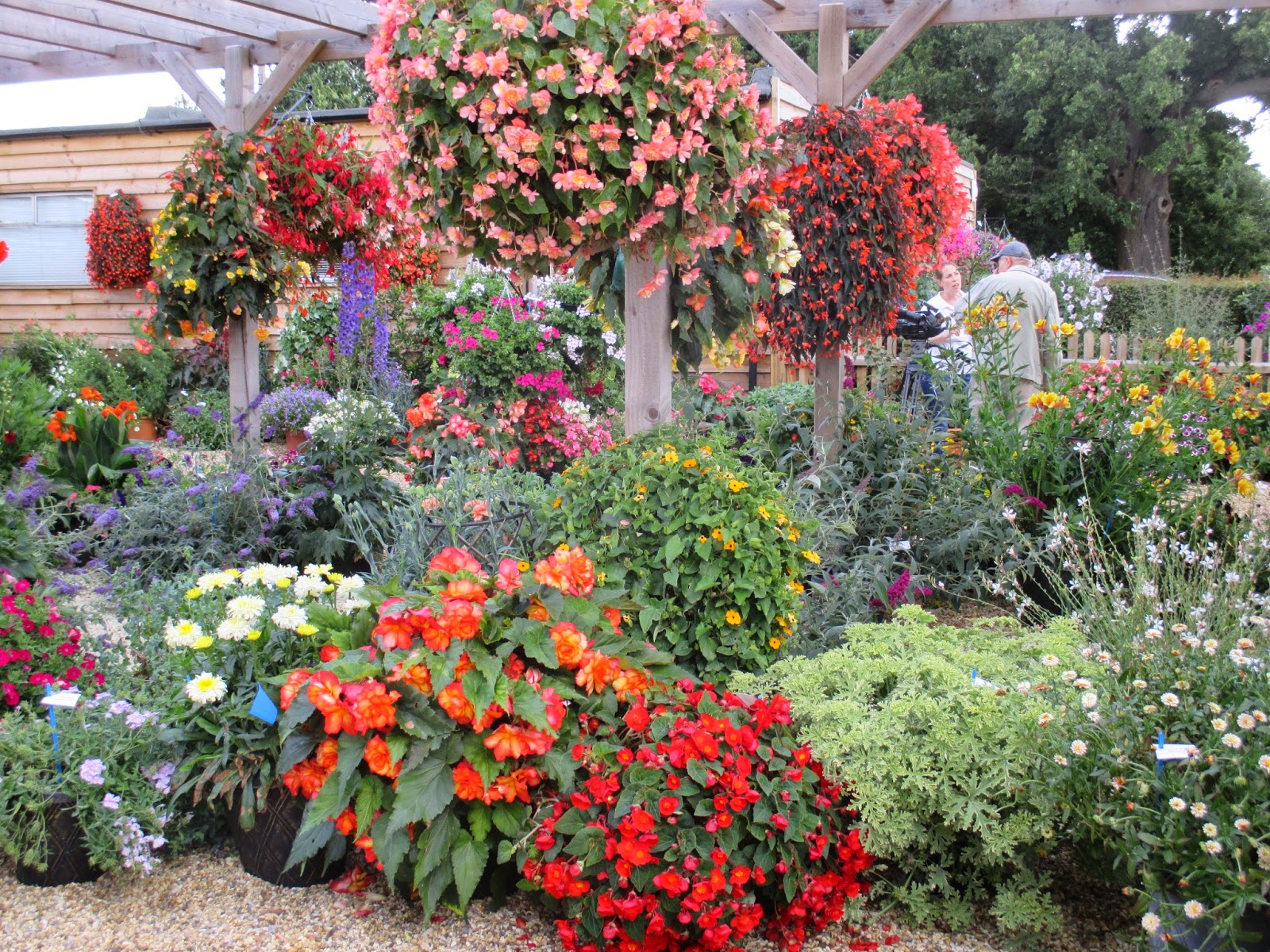 I was lucky enough to be invited by Thompson & Morgan, to an exclusive 'Blogger's Afternoon', earlier this week. There was a small, but perfectly formed, group of us garden bloggers and social media users, all looking forward to meeting the new T & M plant introductions.

To be honest, it felt a bit like being in a version of Roald Dahl's 'Charlie and the Chocolate factory' ! In the book, Willy Wonka showed a little group around his factory and demonstrated the marvels that lay within. The world within the factory walls was ablaze with psychedelic colour and brilliance, with novelties which seemed to defy logic, such as gobstoppers that last forever. Now, at T & M , we were confronted by similar conundrums... such as Gazanias which never close whatever the weather! That certainly defies nature as far as I'm concerned.  I once grew Gazanias, once and once only, because the summer was so lousy that I never saw the colour of the petals, as the flowers remained sulkily closed. The new Gazania we were shown spits in the face of cloudy days, and keeps its petals wide open whatever the weather.

Whilst Gazanias don't do it for me, and are not a plant I would grow, as they feel too spiky and artificial, I can see that ever-open flowers are a definite plus point ! Our very own Willie Wonka (aka Michael Perry, New product development manager) gave us an insight into the new flower varieties, showing us around around the rivers of technicolour plants at the  T & M Trials Ground. I think I was definitely the 'Grandpa Joe' character, (if we are sticking to the 'Charlie' analogy) and could be heard muttering softly, "I've heard tell that what you imagine sometimes come true." 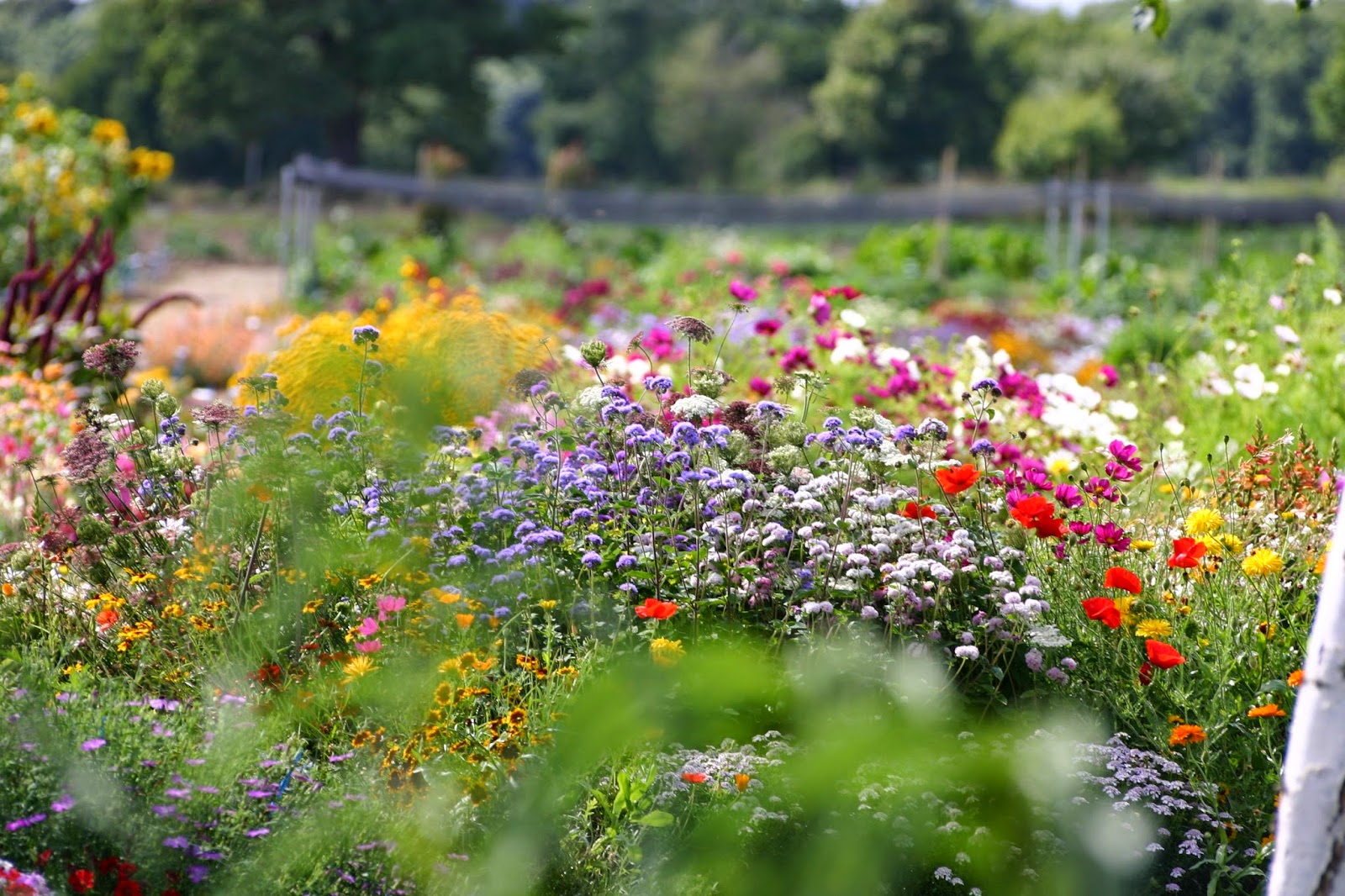 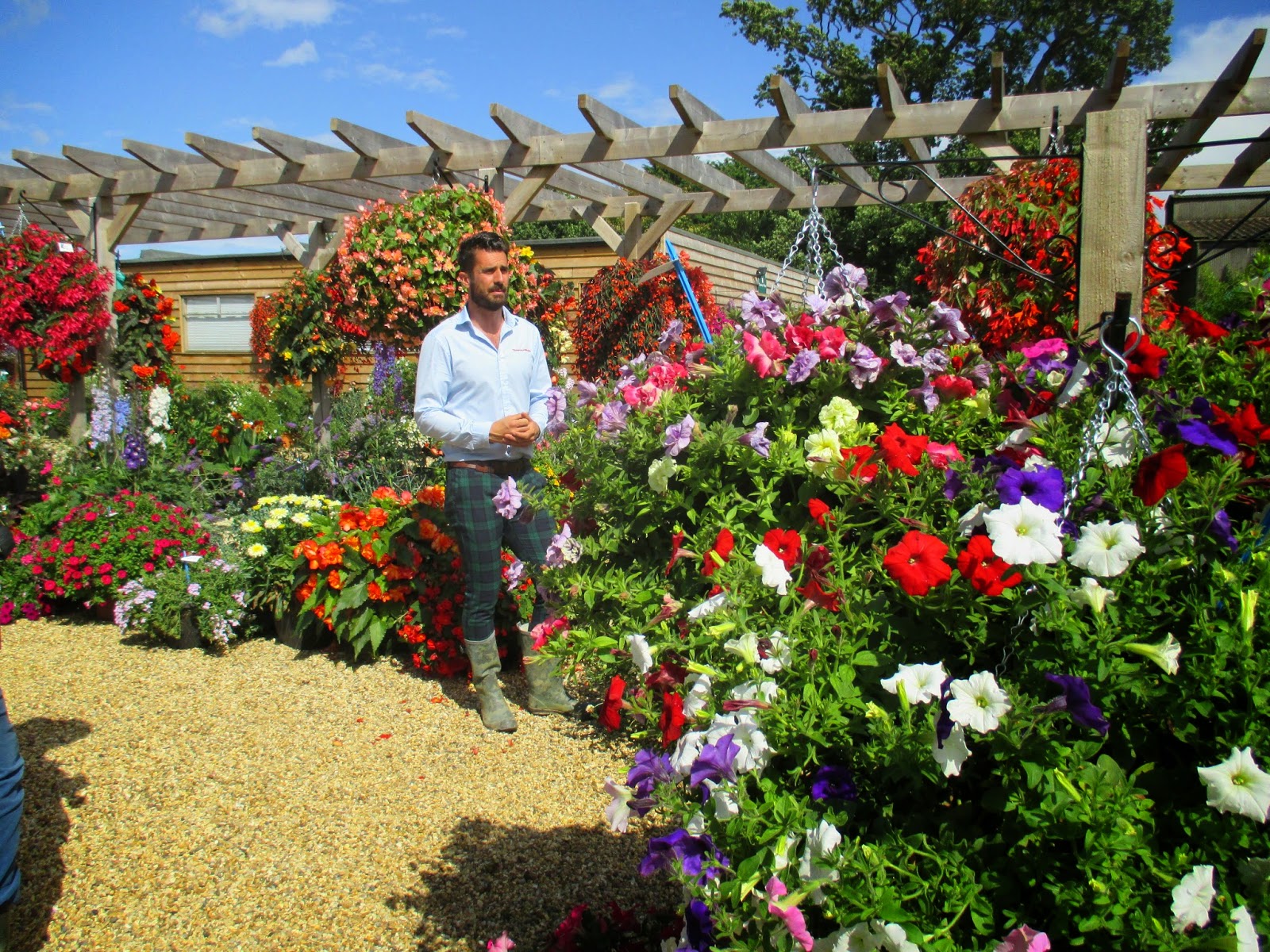 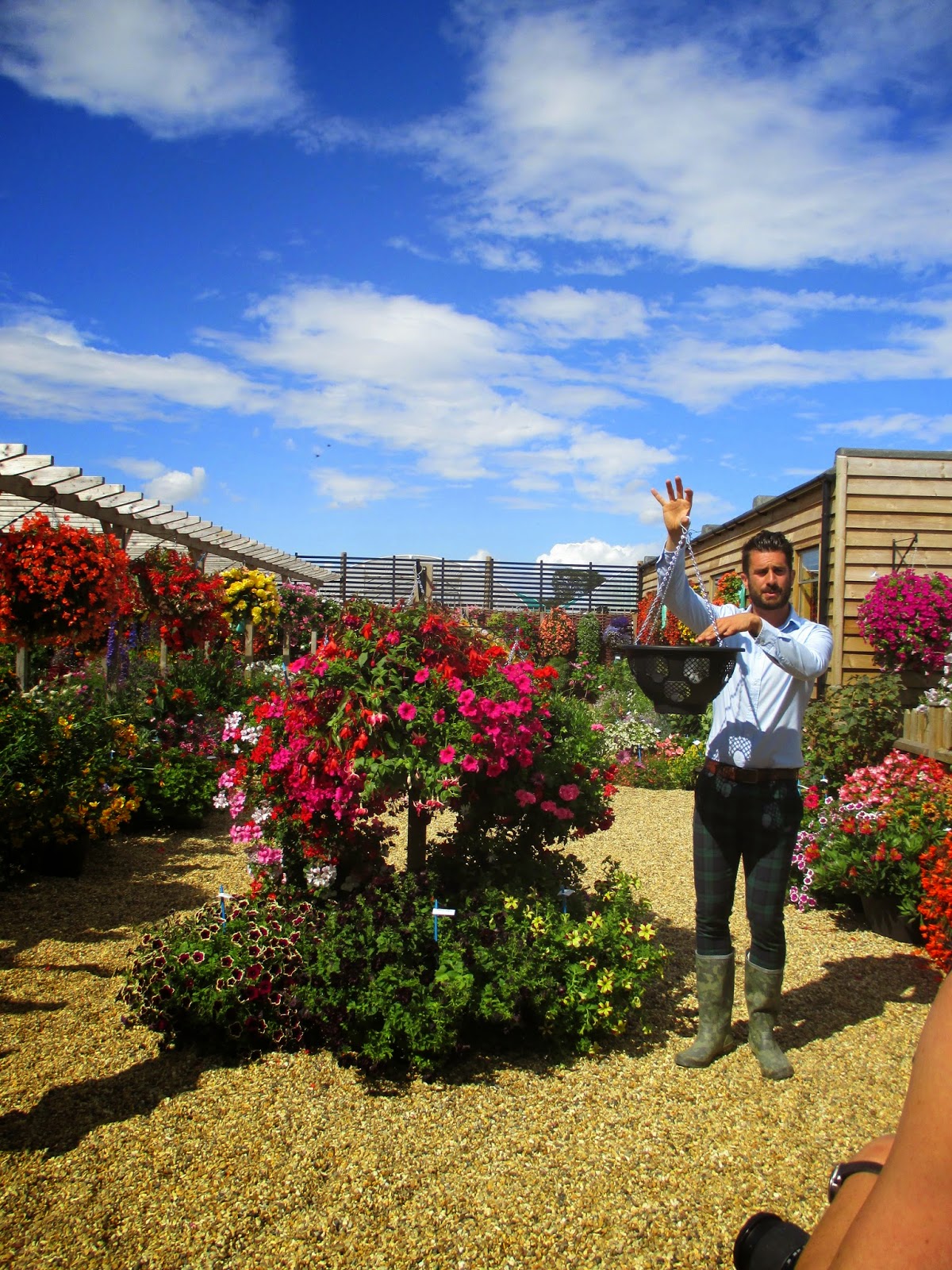 Kris Collins (Communications Officer)  took us through the new vegetable varieties and then around the trials field, thick with special 'sinking mud ' from the recent downpours. I don't think the mud had special magic powers, but I may be wrong ... 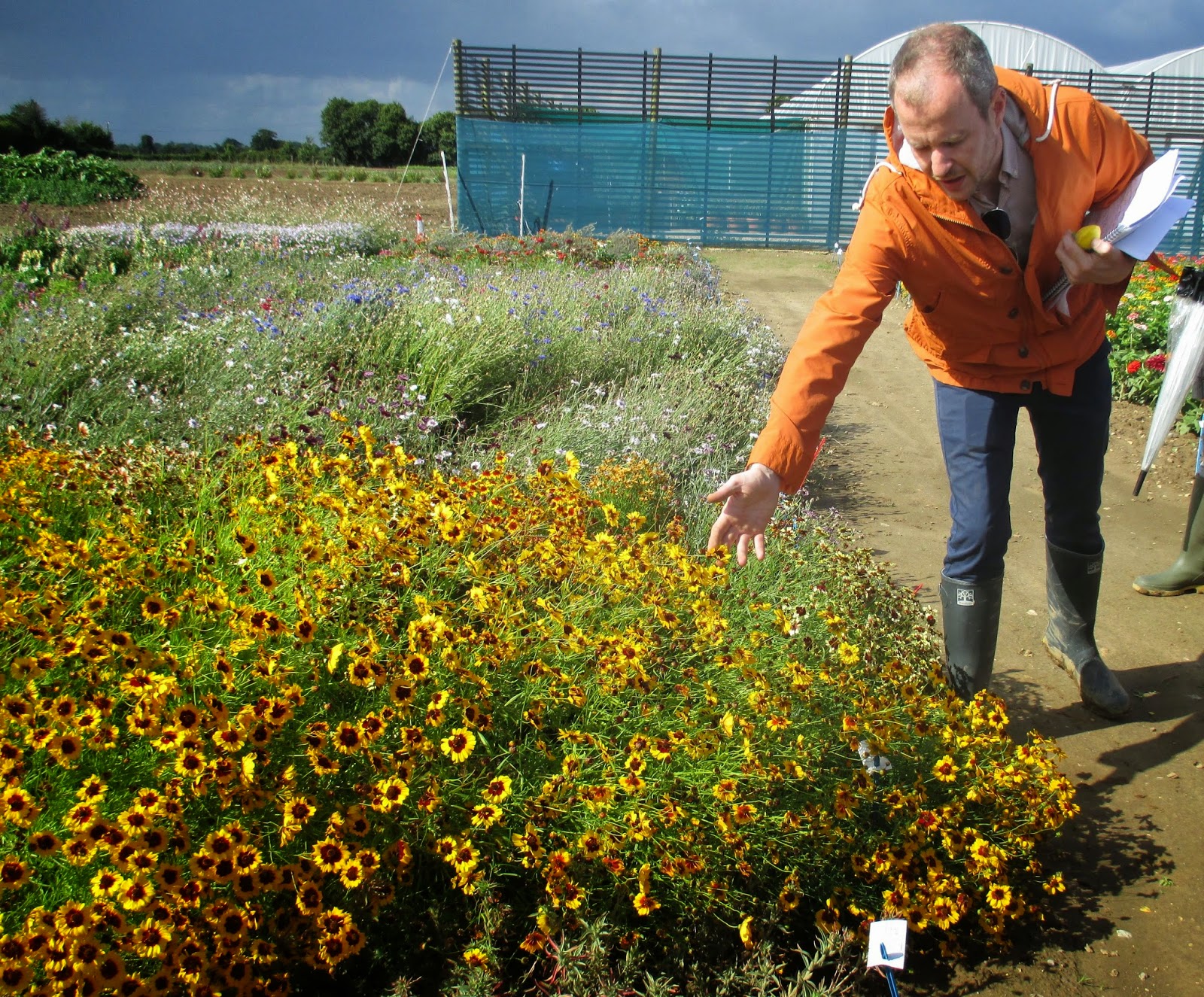 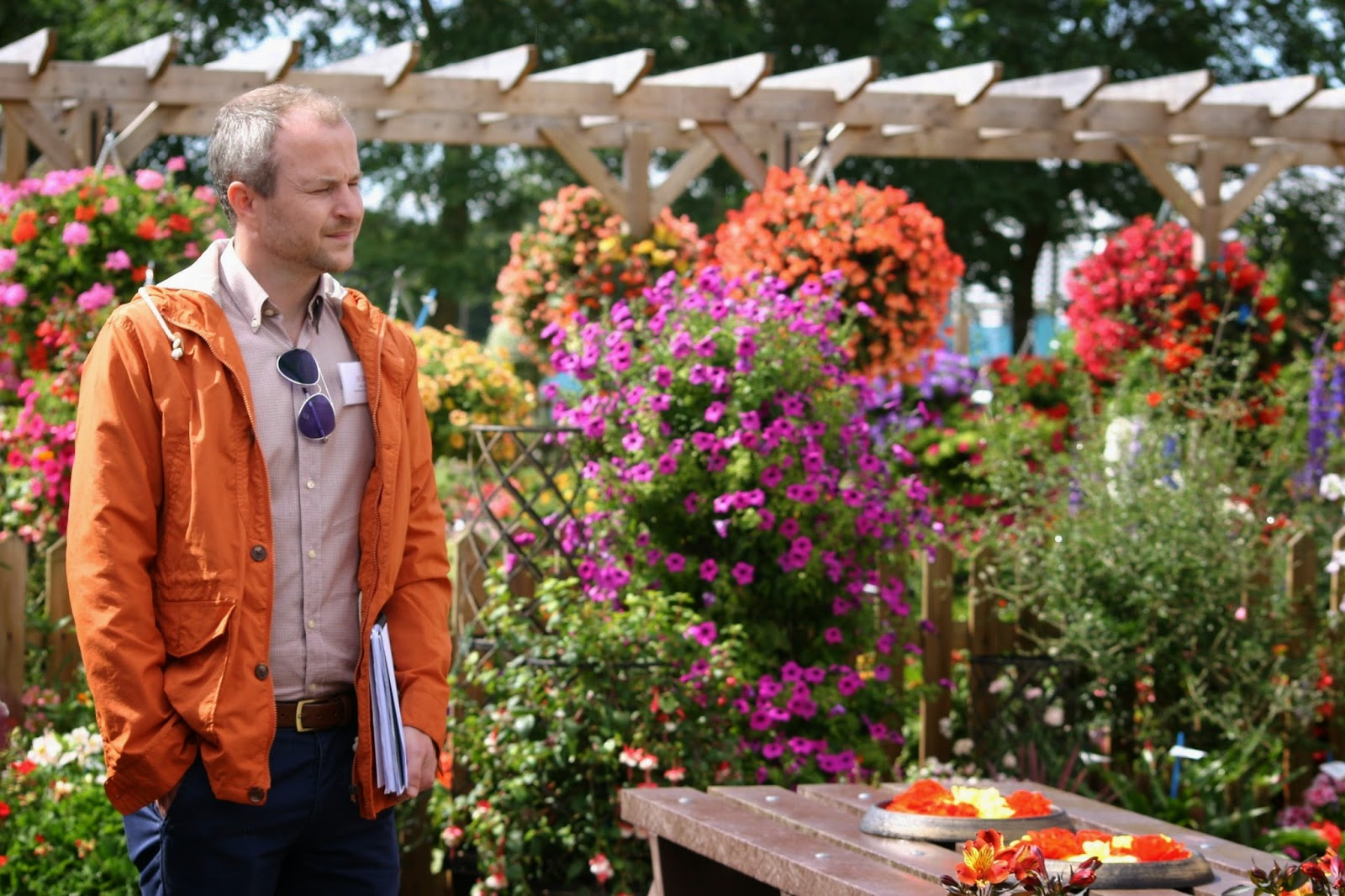 Willie Wonka gave the literary world cows which produce chocolate milk, whereas the 'Oft-alluded -to - but - never - seen - Charles'  at T&M, designed cosmos wearing a ruff. A Tudor cosmos. 'Sexmos'! Does the world need Tudor Cosmos ? While the answer must be 'no', it is very pretty. 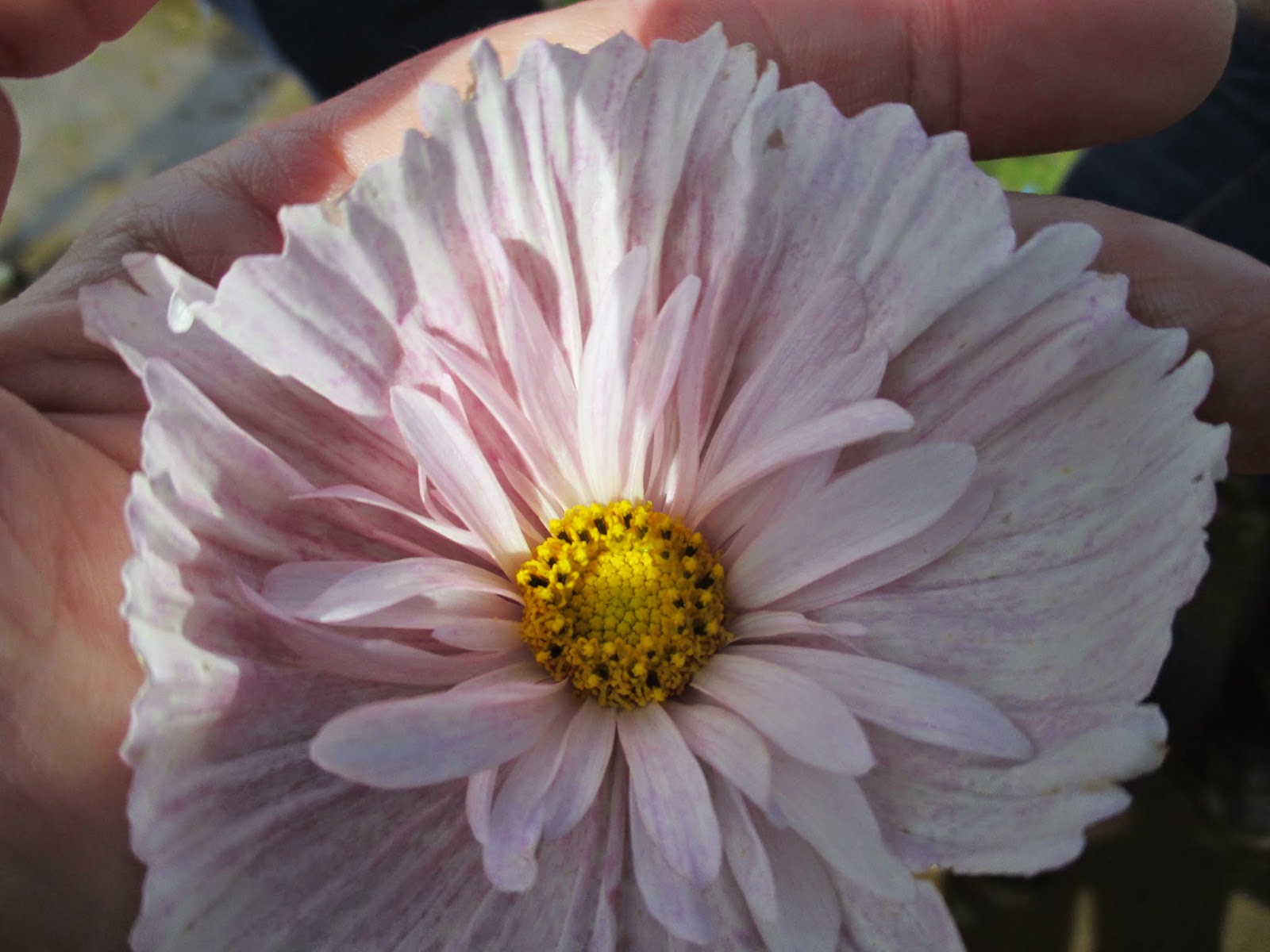 As Willie Wonka invented a 'hot ice cream for cold days' so the boffins at T & M have devised the teeny, tiny Buddleja 'Buzz'. It grows to no more than four feet, yet flower spikes are comparatively large. As these plants are sterile, the question was raised about its usefulness as a source of nectar for pollinators. There is proof in the photo below, and I know that they attract butterflies as much as their larger siblings, as I have four baby Buzzes in my own garden which are pollinator magnets. New introduction is 'Buzz Indigo', with dark, purplish blue flower spikes. 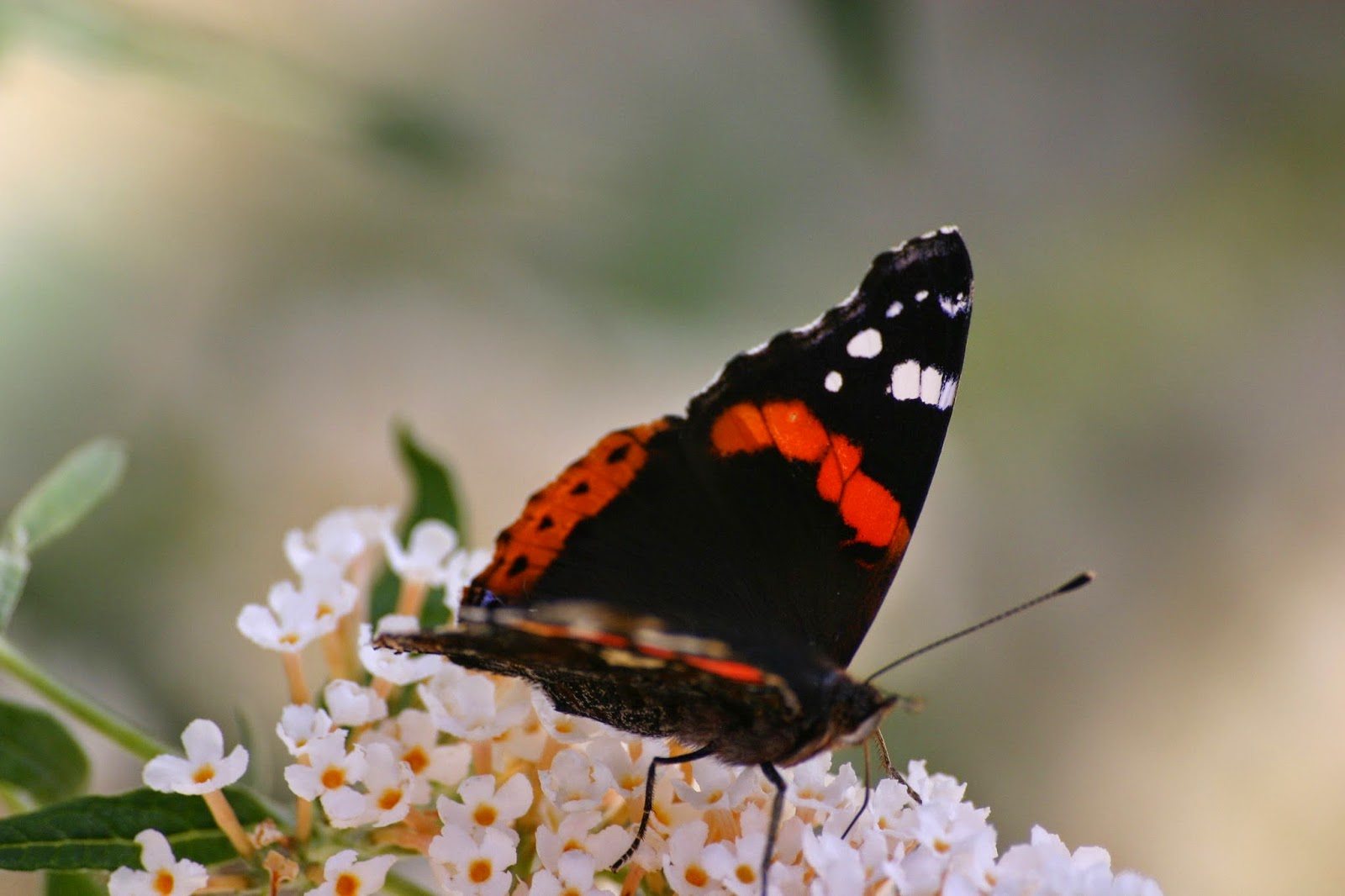 'Square sweets that look round' figure in 'Charlie and the Chocolate factory', whereas T & M have magically shrunk down a Eucomis to cute Patio size. Called, erm, 'Eucomis Patio Collection' they would sit happily in pots, or at the front of the border. I think they could be a useful addition to the family. 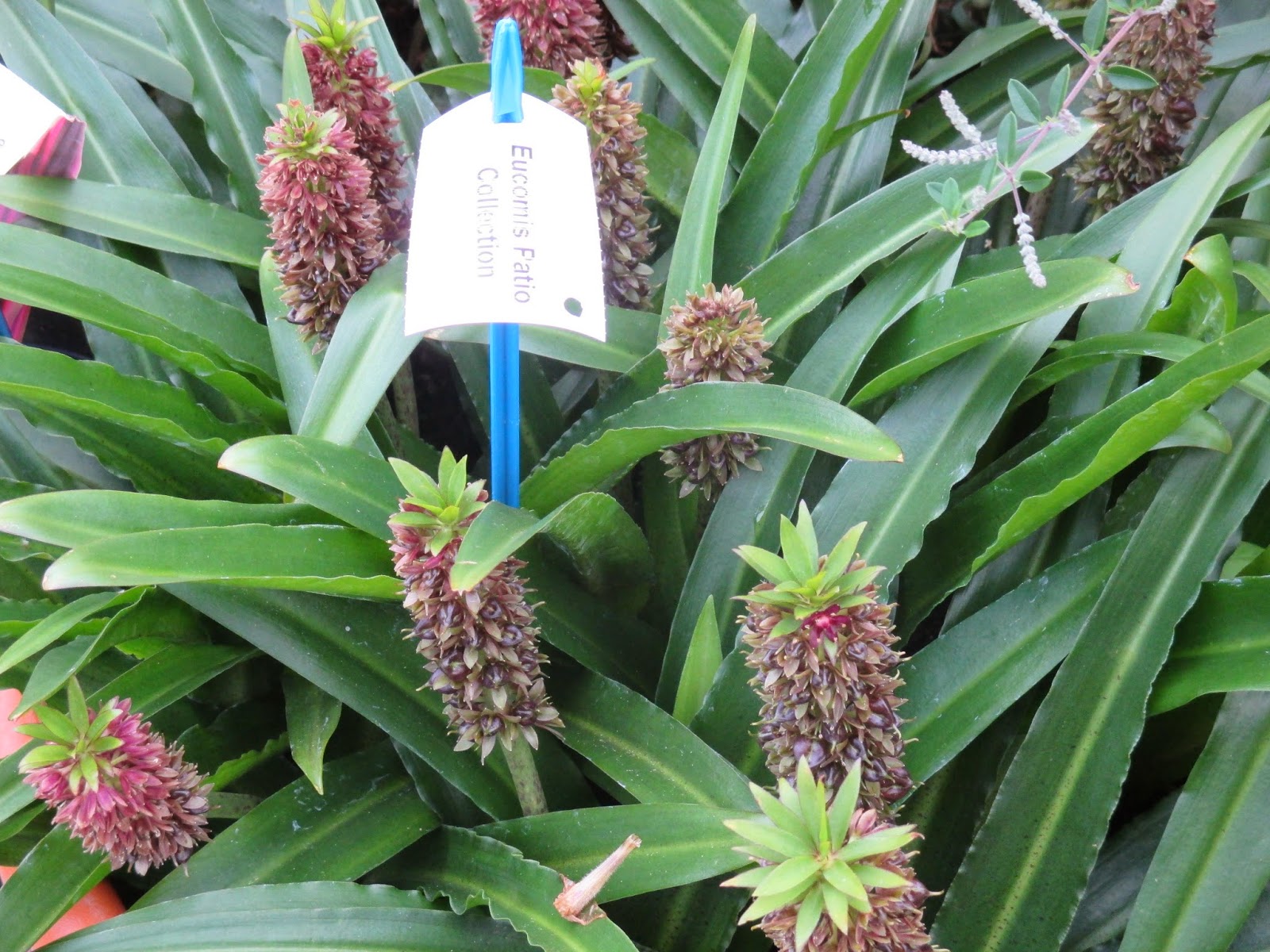 As Willie Wonka invented edible marshmallow pillows, so T & M continue on their quest for the Holy Grail of the vegetable world, varieties which are attractive in their own right, as well as edible.  Chilli 'Loco' (below) ticks lots of boxes, as it is certainly attractive with its bushy, compact habit and its purple chillies which are highly ornamental. It was growing outside and was clearly happy to be out in the elements. But how does it taste ? The jury is out on that one ! It was described by Kris  as being mild in flavour, but when eaten raw, packed quite a kick (as testified by certain members of the group!) Clearly its impact will change after cooking. 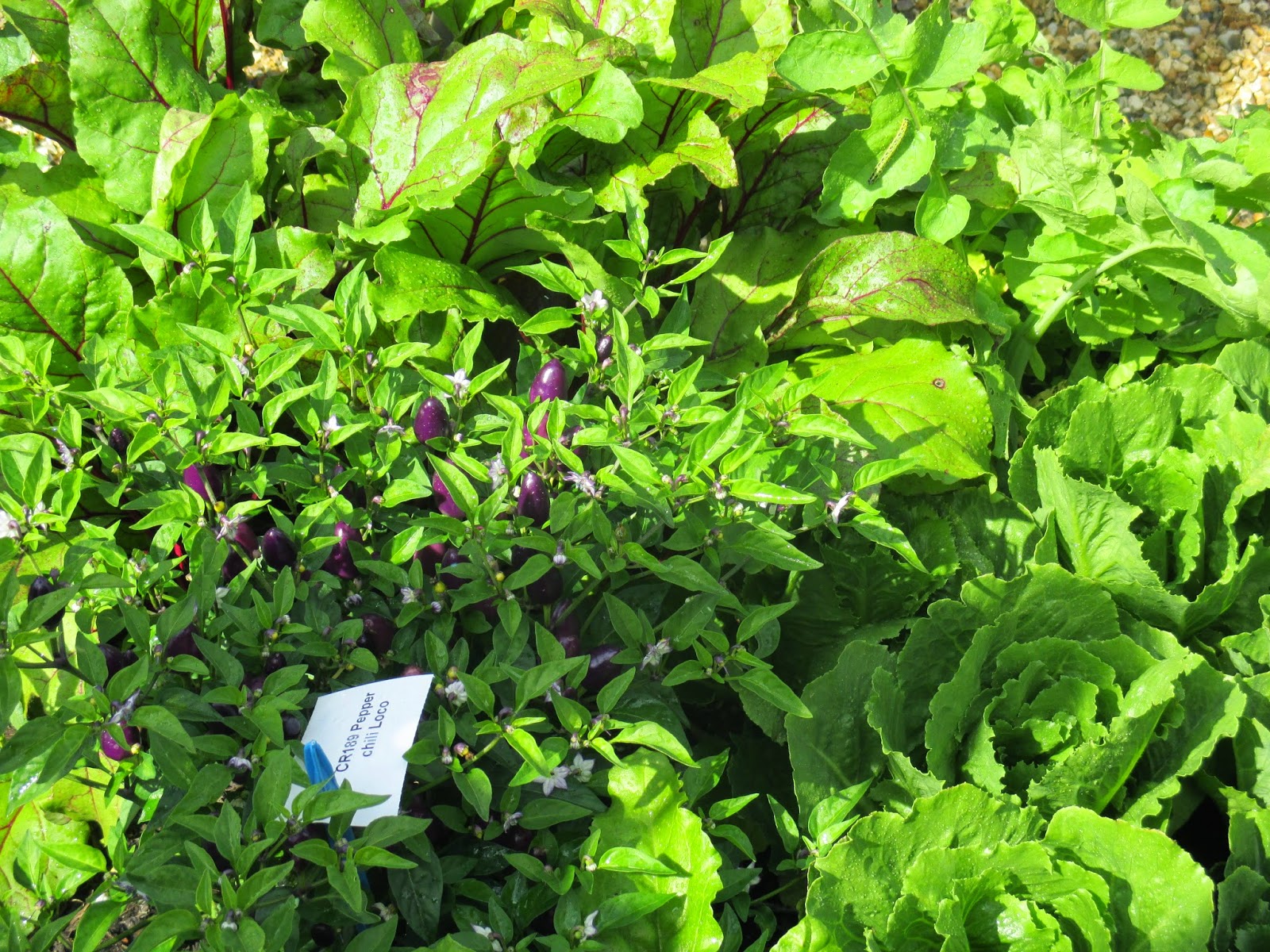 Willie Wonka gave us chewing gum that never loses its flavour, whilst T & M gave us the magnificently named Petunia 'Johnny Flame'. The name alone sold me, as it could be the name of a frontman in a retro rock 'n roll band. It is definitely rain resistant, as the photo shows it after very heavy downpours, and it has the most beautiful velvety flowers. It is one I will definitely be growing next year. 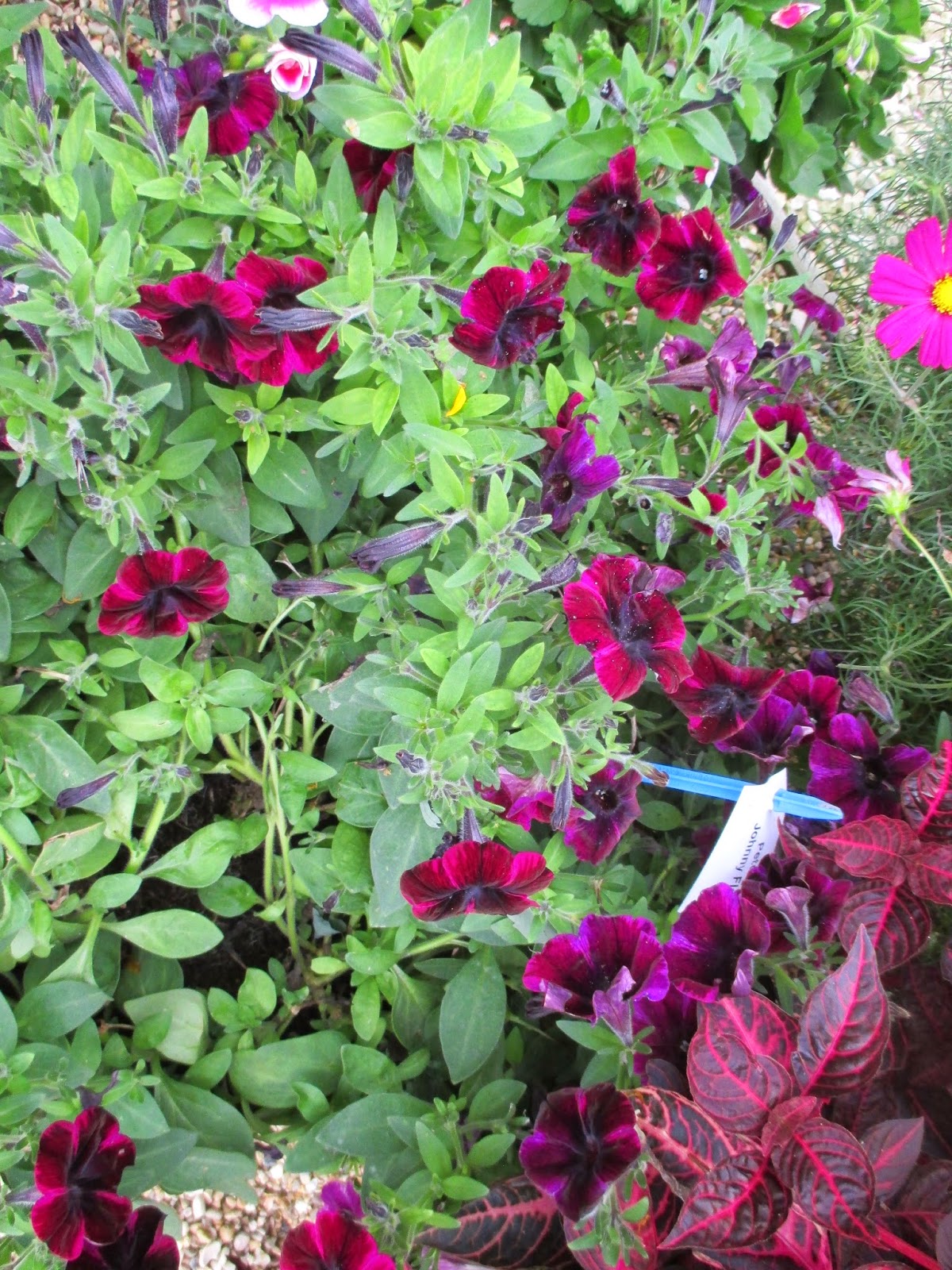 And the 'TomTato' ... the plant which produces tomatoes AND potatoes well, there must be a bit of Willy Wonka magic going on there ...