I know when I plant them, that one day they may have to be sacrificed to the Great Deity of Planting Distances. I water them, feed them and nurture them, in the full knowledge, that in the future, they will be dug out and slung, unceremoniously, on the compost heap.


When I began to garden, all those years ago, I adhered strictly to planting distances, and lived with acres of bare soil, until the plants filled out. This could take years, if shrubs were involved. Now, I have always disliked bare soil, as my mother used to say 'nature abhors a vacuum', so what does nature do ? Why, encourage weeds to colonise the bareness, that's what !


My inexperienced self was discussing this with a gardening friend, and bemoaning the vast tracts of brown, around my tiny plants, and she gave me the benefit of her wisdom. Her advice was 'cram them in' ! She probably phrased it better than that, but that was the essence of it.

She said she planted things close together initially, to give an instant effect, and to cut down on the weeding. When things began to grow, and fill out, and the plants were becoming crowded, she dug them up and moved them elsewhere. Brilliance ! Simple yet so effective !


So that is what I did from then on - planted densely, then when plants began to encroach, dug them up and into a new bed. This worked effectively for 30 years, as the garden grew and developed, as there was always an area I could move the plants into. Always a new bed to dig, or an existing bed to extend. Until now ...


To be honest, I couldn't think of anywhere to move my excess plants too, as after thirty plus years, all beds have been dug. It was an odd sensation to realise that my usual method would no longer work.

About this time every year I have to do a sweep of the garden, and define every plant, making sure that it has its own space to grow in. I plant very densely anyway, so have to monitor growth closely. This is a very personal thing, as one woman's well spaced plants, are another woman's overcrowded ones. I am always interested to see how other gardener's manage spacings, and the results differ greatly. Some people prefer a circle of bare soil, or visible mulch, around each plant, whereas others have the plants tumbling over each other, in a dense tapestry.

All the photos in this post are the 'before' shots ! They all show the evidence of my over planting , and my next job is to go round and gently dig up the plants which are suffering through overcrowding and find them a new home.


My own tapestry is extremely dense by this point in the year, so there are quite a few plants which will have to be carefully dug out and rehomed - some in the compost (erm, the brick red perennial poppy) and others potted up and given to friends.


While I was walking round, deciding on my sacrificial lambs, a cunning plan started to form... I spotted a border which could do with being cleared out, extended and replanted. Yippee ! A double whammy ! A home for those crowded out plants, and an opportunity for more colour. The part of the border needed fettling, too much thuggish lamium, too many self seeded aquilegias and not enough structure. I had thought of it as a difficult border as it is shady, but it was only shady because the silver birch had low branches, which could be removed. I lifted the canopy of the birch, allowing much more sunlight in, and all my sacrificial lambs escaped the compost heap ! 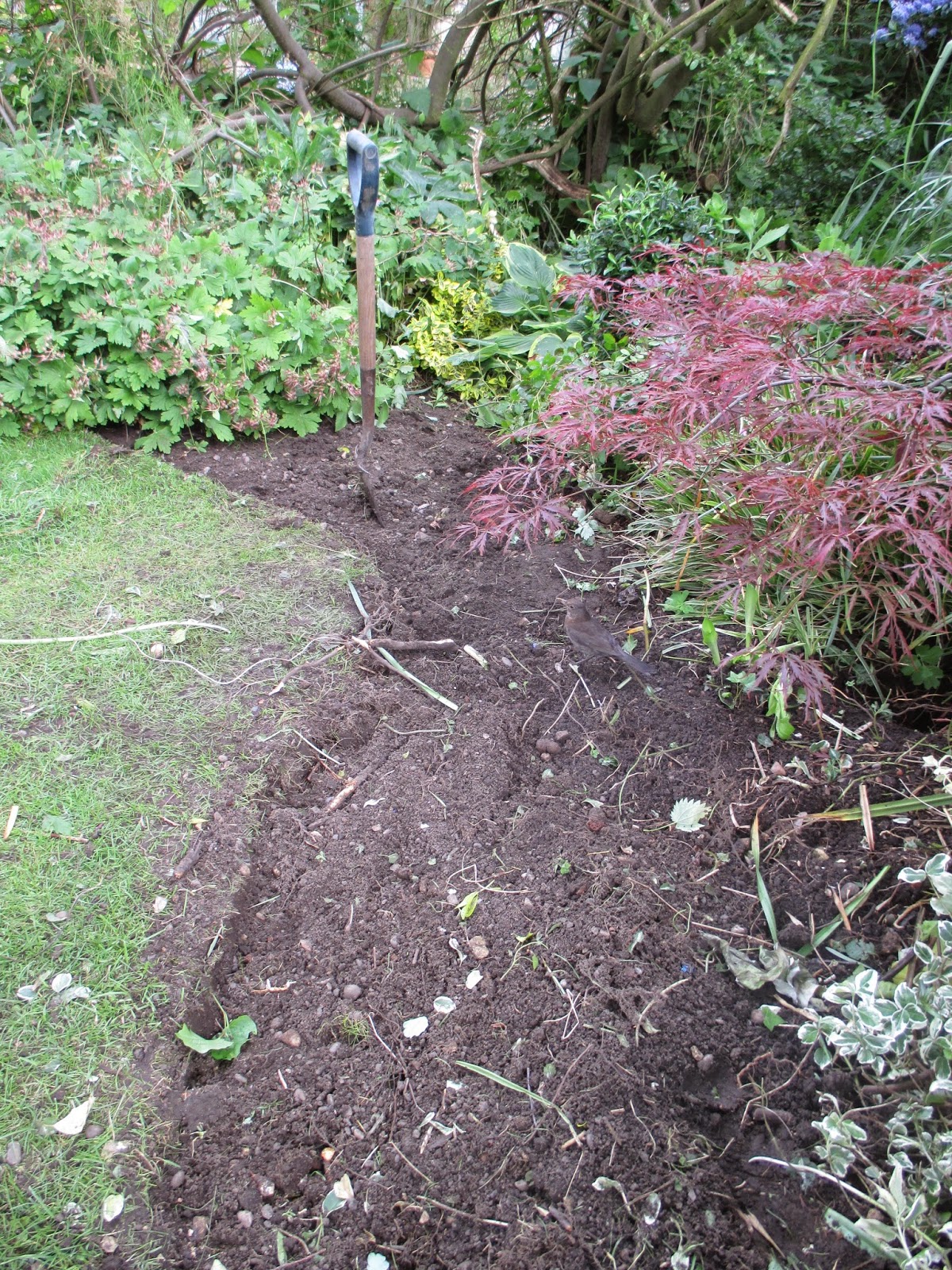