Two weeks ! That's all ... it's not long is it ? I have been on holiday, and out of the garden for a fortnight, and I can see such a huge difference on my return. The season has advanced so fast in that short time, and the growth has been phenomenal. A short time away enables you to see everything afresh - warts and all - and to see it in some sort of perspective, which you don't get if you are out in it every day. I was surprised by the lushness of the garden now, plants have sprung up and filled out , so vast tracts of bare soil are no longer visible. It all feels quite full now, as Spring advances, and brings that burst of zingy growth to everything.

We have been down in the Deep South, USA, and it has been so interesting to contrast it with the UK, and to see what is blooming, and what is not. The thing that tickled me the most ... hellebores and roses out together! I couldn't believe that roses were in full bloom in certain areas, although it was only early April. So, it's good to be back, and to use that brief window of opportunity for critical planning, when you see the garden afresh, almost with new eyes.


One of the best things though - the Auriculas are coming into bloom...

I love the stiffness of these flowers, they have an almost artificial quality, as if they are not real, but are models or paintings. They are the perfect antidote to winter gloom, as the colours are so bright and varied. I have only been growing them for a little over a year, and have found them very easy, thus far. I overwinter them in a cool greenhouse and water them very sparingly, increasing water when they come out of dormancy and begin to put on new growth. They then enjoy a good feed. 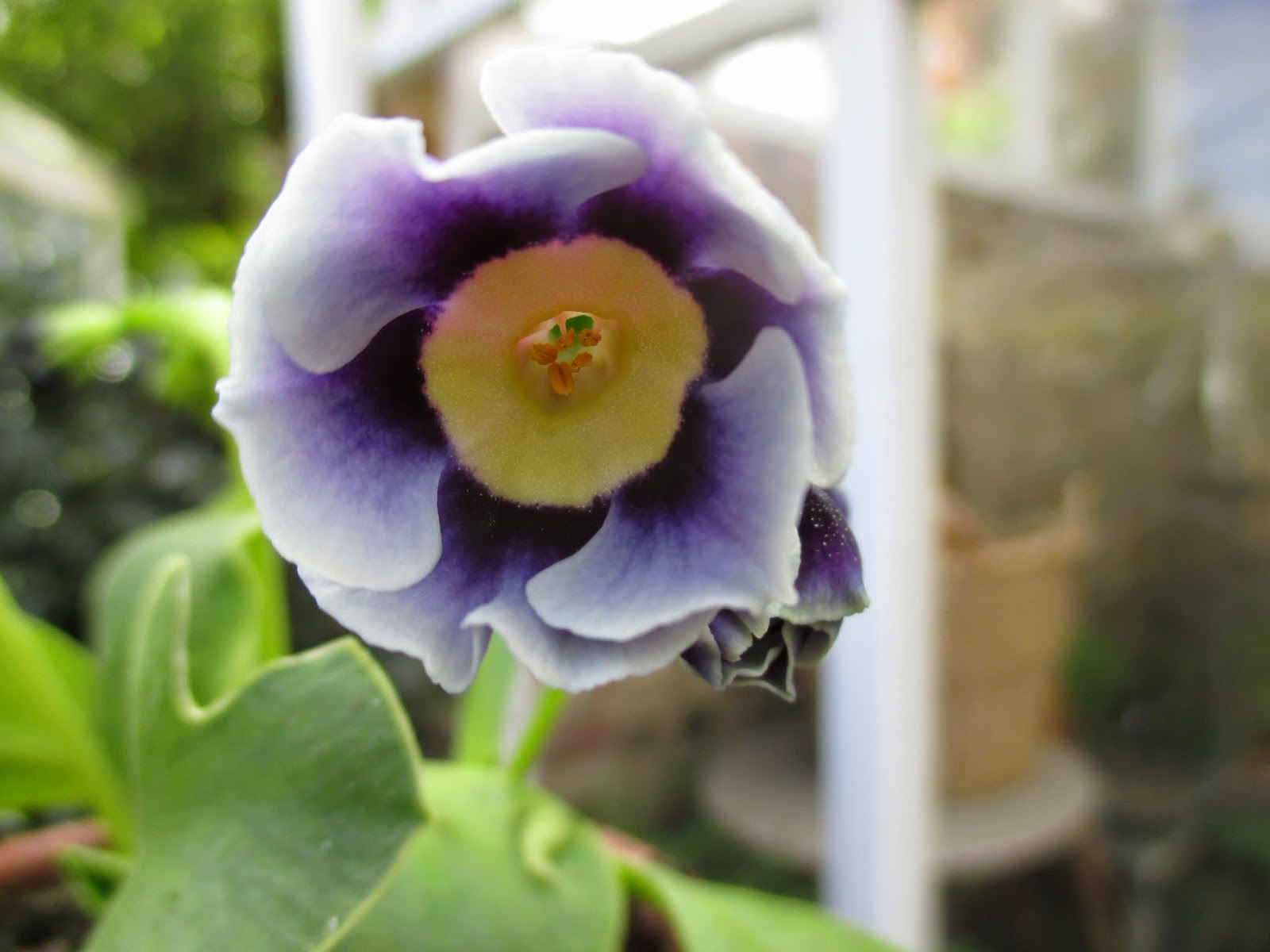 There is some controversy between the merits of plastic pots versus terracotta, but even though I was advised from someone from the National Society to use plastic, I prefer the aesthetics of terracotta, so transferred them all into those. They do not appear to have suffered, and indeed, I have read opposing advice too, that terracotta is preferable to plastic.

Although I love them with a passion, I can also see how some gardeners might hate them, probably for exactly the same reasons ! I could see that the artificial quality of the flowers might be a negative aspect for some people. The stiffness of habit which I love, might be disliked by some , as being lacking in grace and a more natural habit preferred.


There is a great sense of history surrounding Auriculas, just as there is around roses, and this adds to their appeal, for me.

The original Auricula (Primula Auricula) is a small, usually yellow flower growing in Alpine meadows, whilst the cultivated variety appeared in English and Eurpean gardens from the mid 16th century. One theory for their introduction is that they were brought to England in the 1570's by Huguenot Flemish weavers, escaping from religious persecution. The other theory is that they were exchanged by English and European plantsmen at the time. 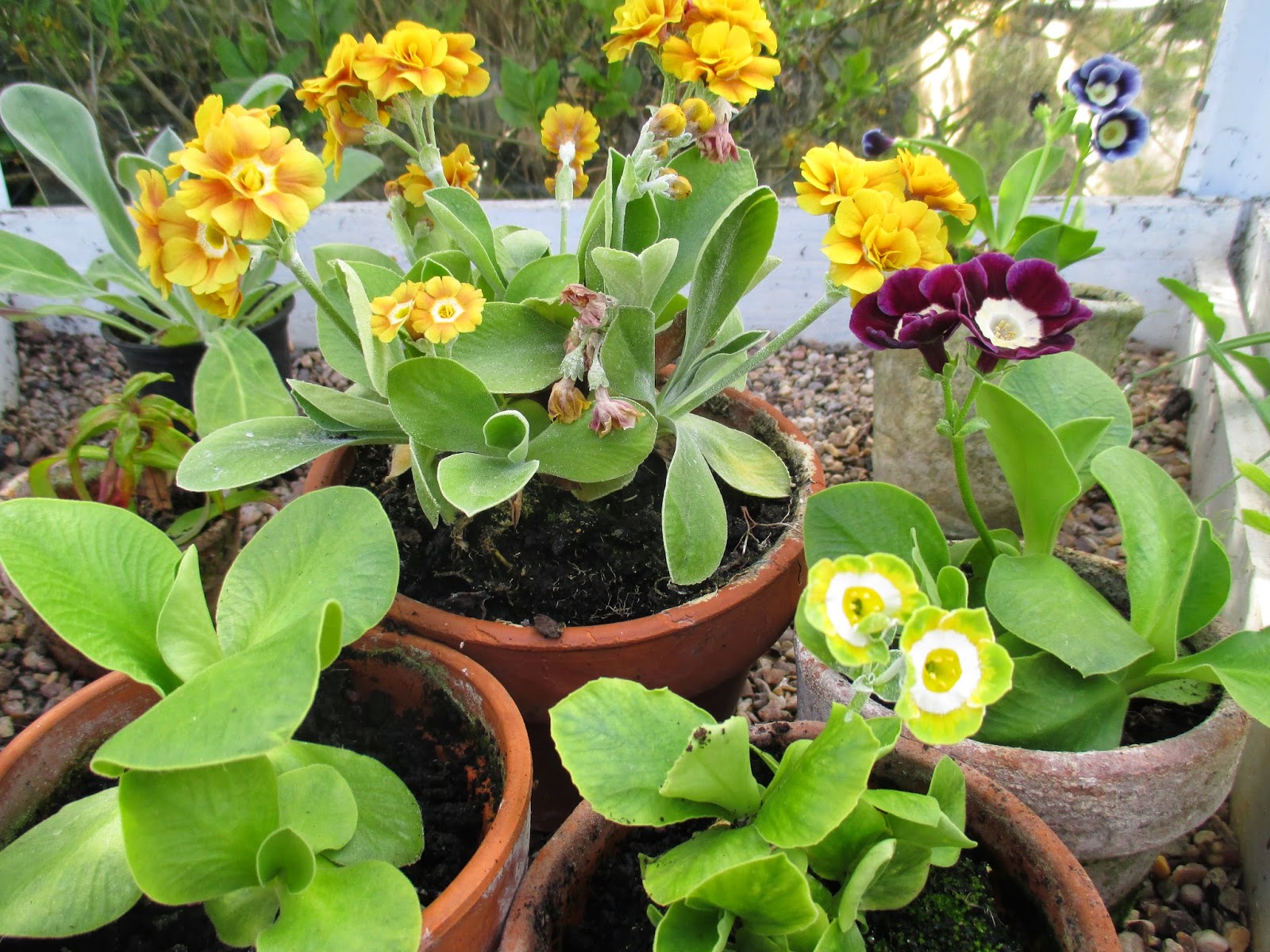 However they reached here, however, they soon became extremely popular with rich and poor alike, and were grown in great numbers throughout the 17th, 18th and 19th centuries. 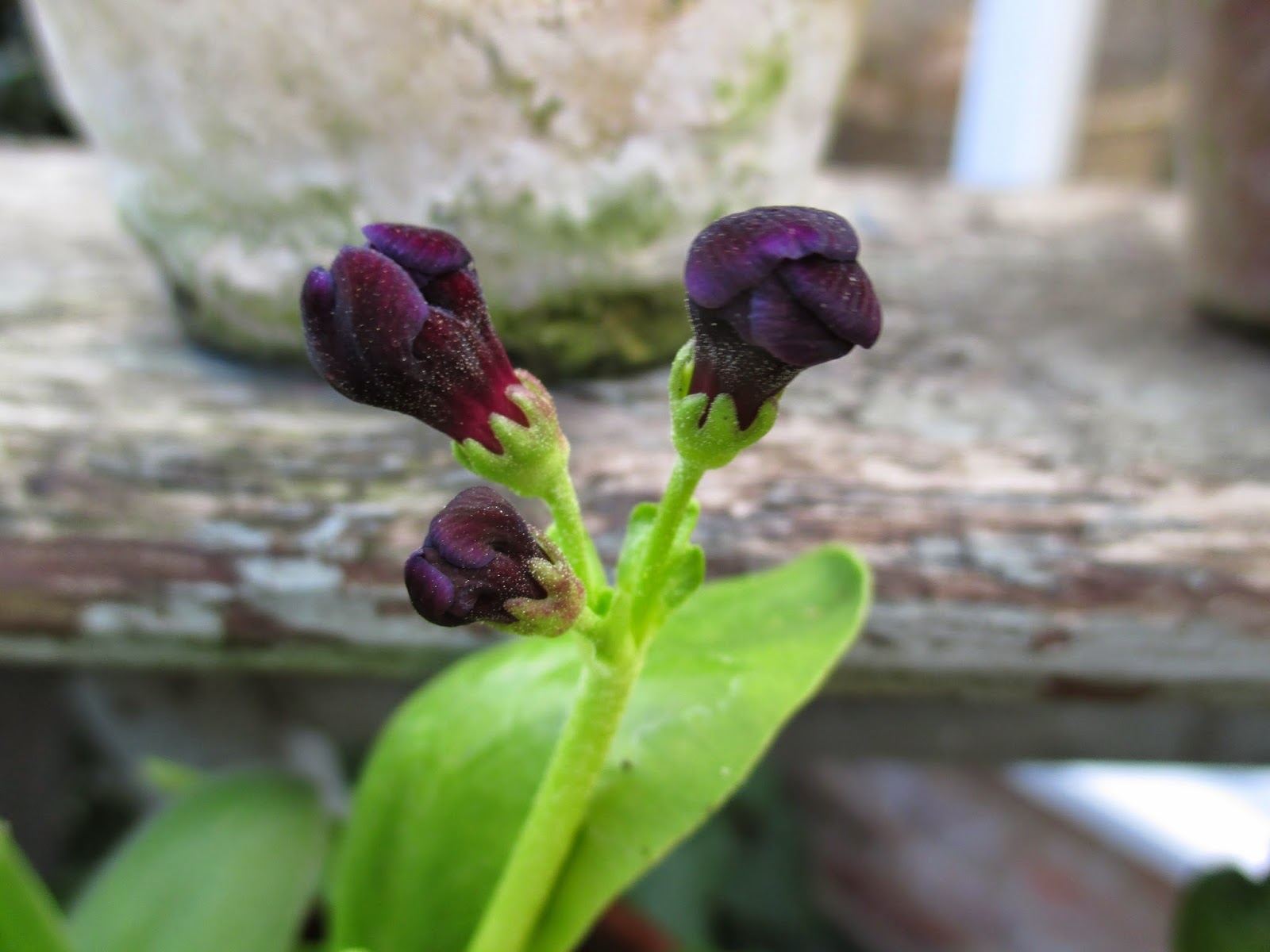 By the 19th century there were 'Feasts' or shows, where growers of decorative flowers ('Florists') would meet to display their plants. This was very popular amongst working people in the Industrial North and Midlands, and were often held in Public Houses. Copper kettles were often given as prizes, and one often hung outside to denote the show.

Towards the end of the 19th century there was a movement against the artificial nature of these flowers, and they fell from popularity, although still retained a loyal following.  The advent of the First World War diminished their popularity further, and many varieties were lost forever. 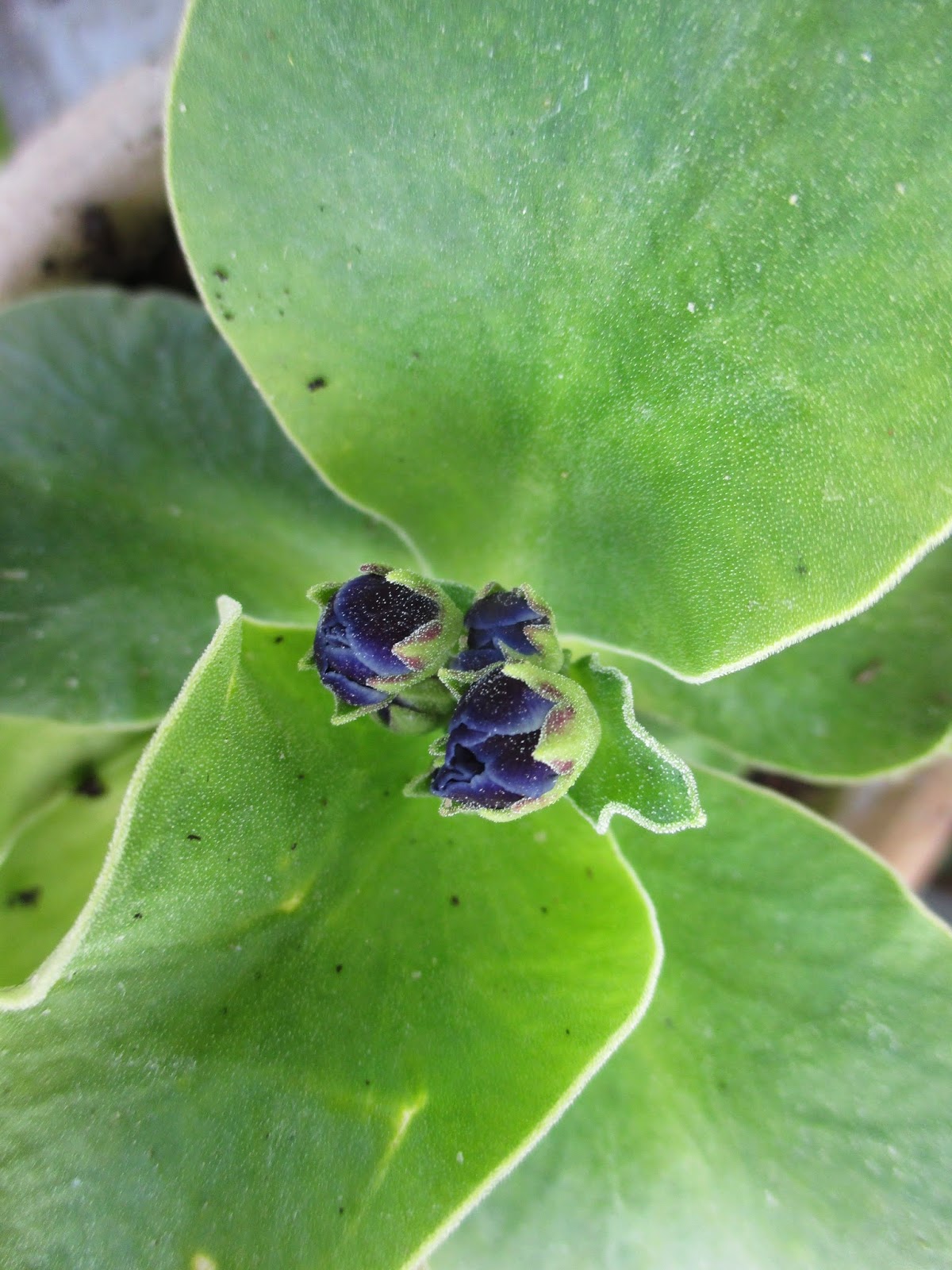 A recovery began after the Second World War, which continues to this day, as the Auricula continues to grow in popularity. Breeders have introduced many new varieties, including stripes and doubles, to replace what was lost. 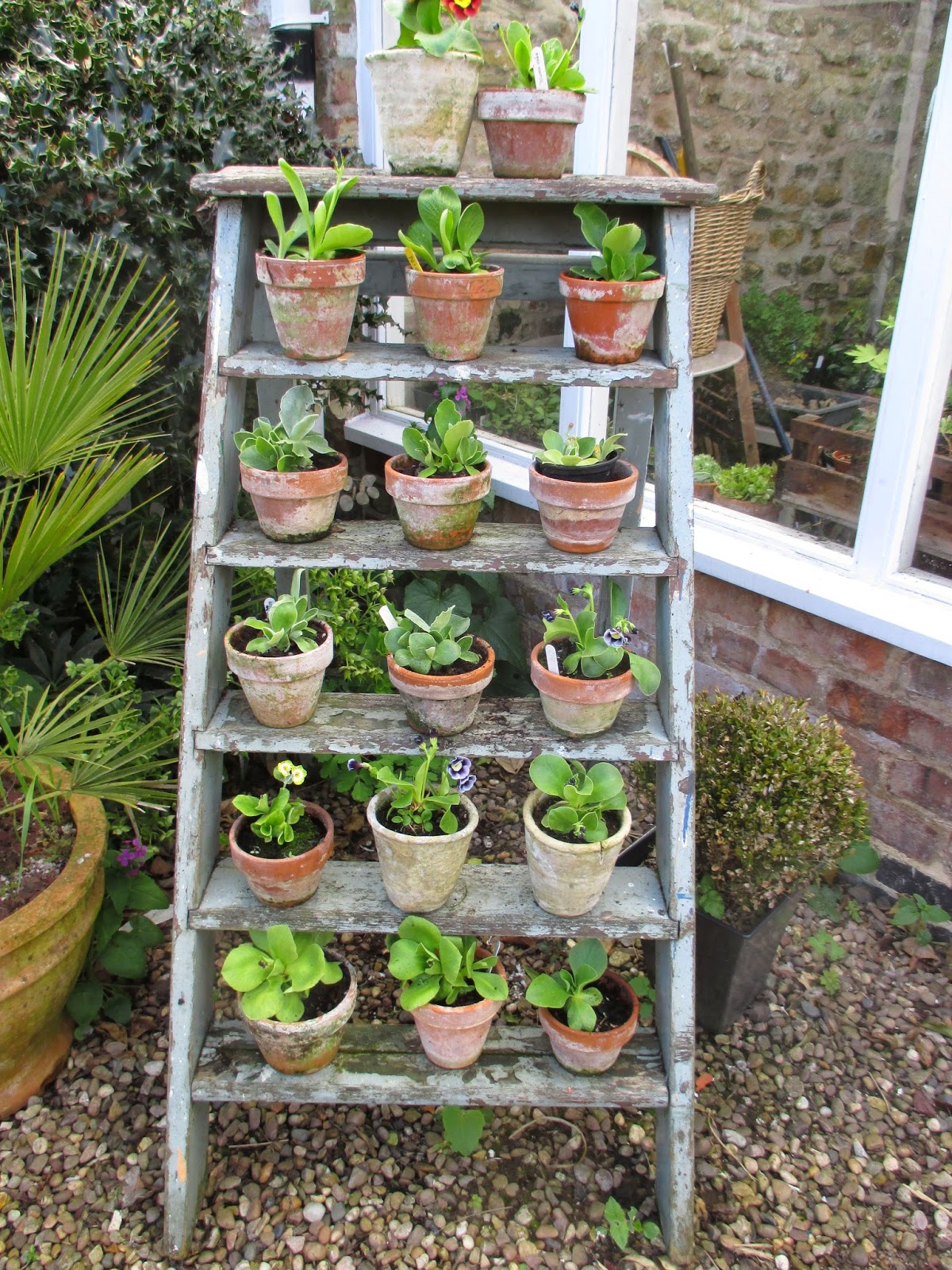 I must be missing something, though, as I have read that they are plants which demand a lot of attention, one source saying that they are more like 'pets' than plants ! Hmm! Although I do poke around them a lot, I can't say that they are demanding. They have been remarkably disease free so far, and are tolerant of somewhat irregular watering. Maybe if you show them, then they require much more close attention. 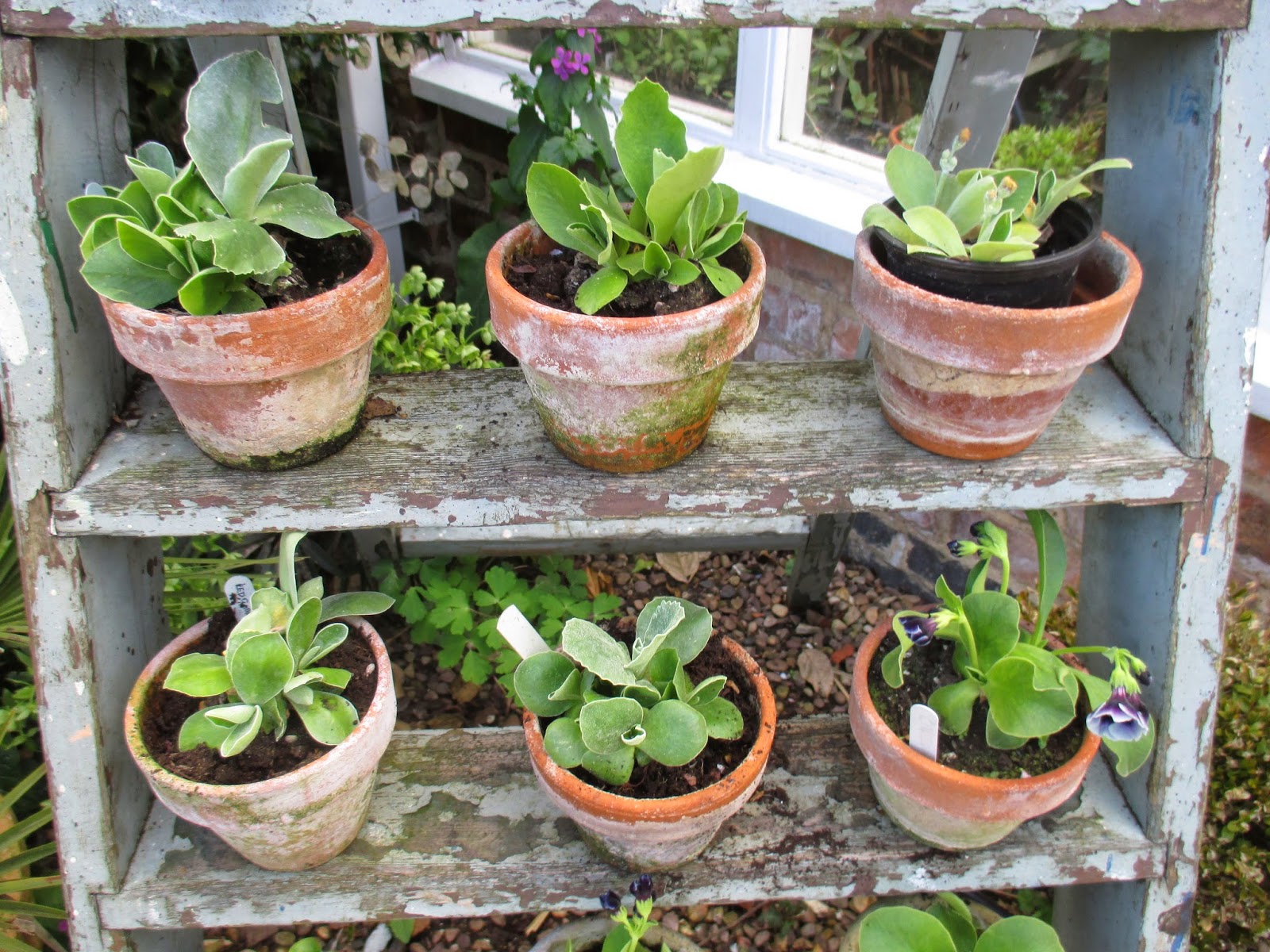 They must be reasonably happy as several of them have produced babies, which I have successfully potted up.

They are a completely separate aspect of the garden to all others, and I really like that. They stand alone as a small collection of objects of beauty, largely forgotten about for most of the year, but stepping gloriously into the limelight for these few short weeks. 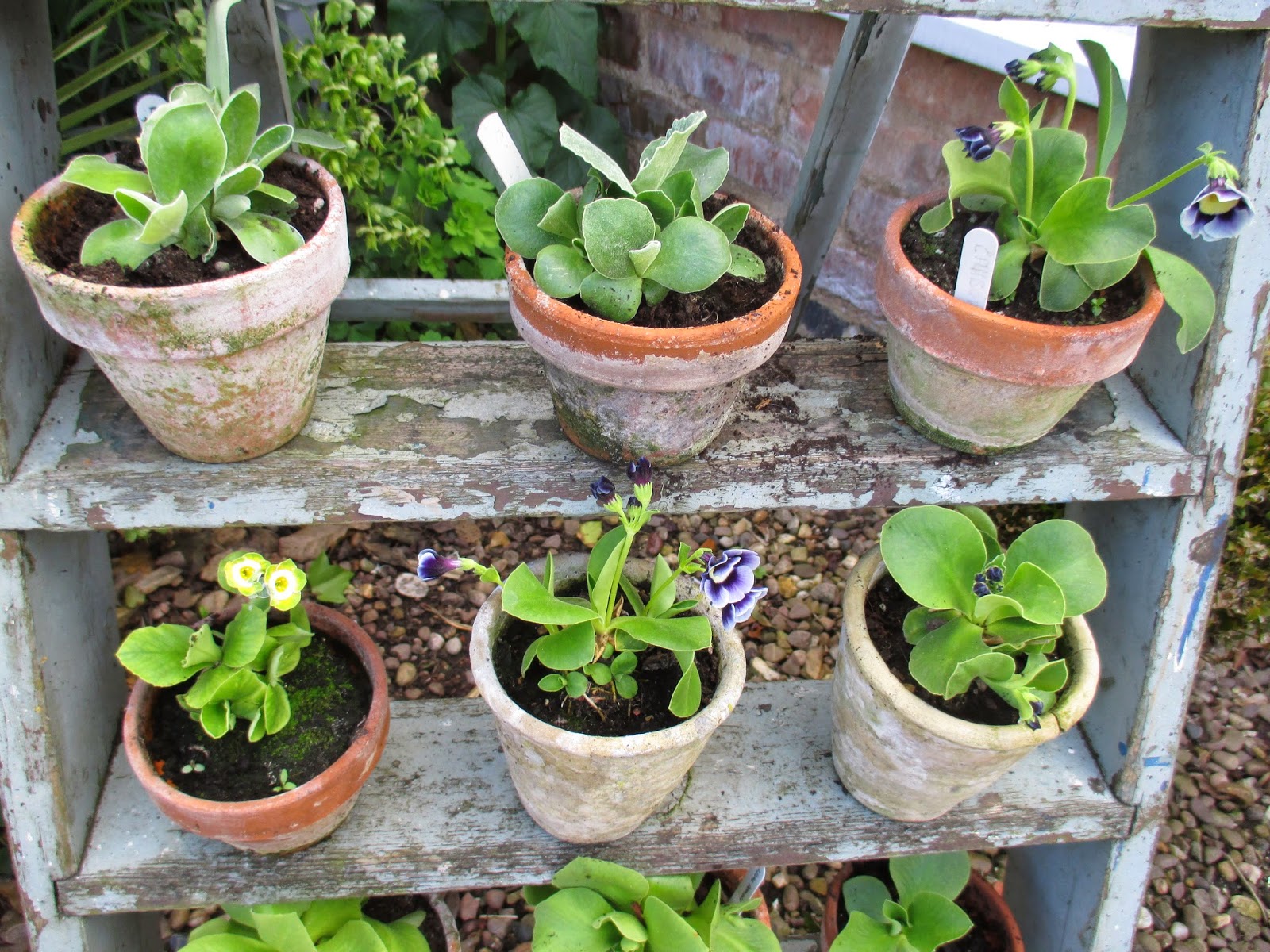