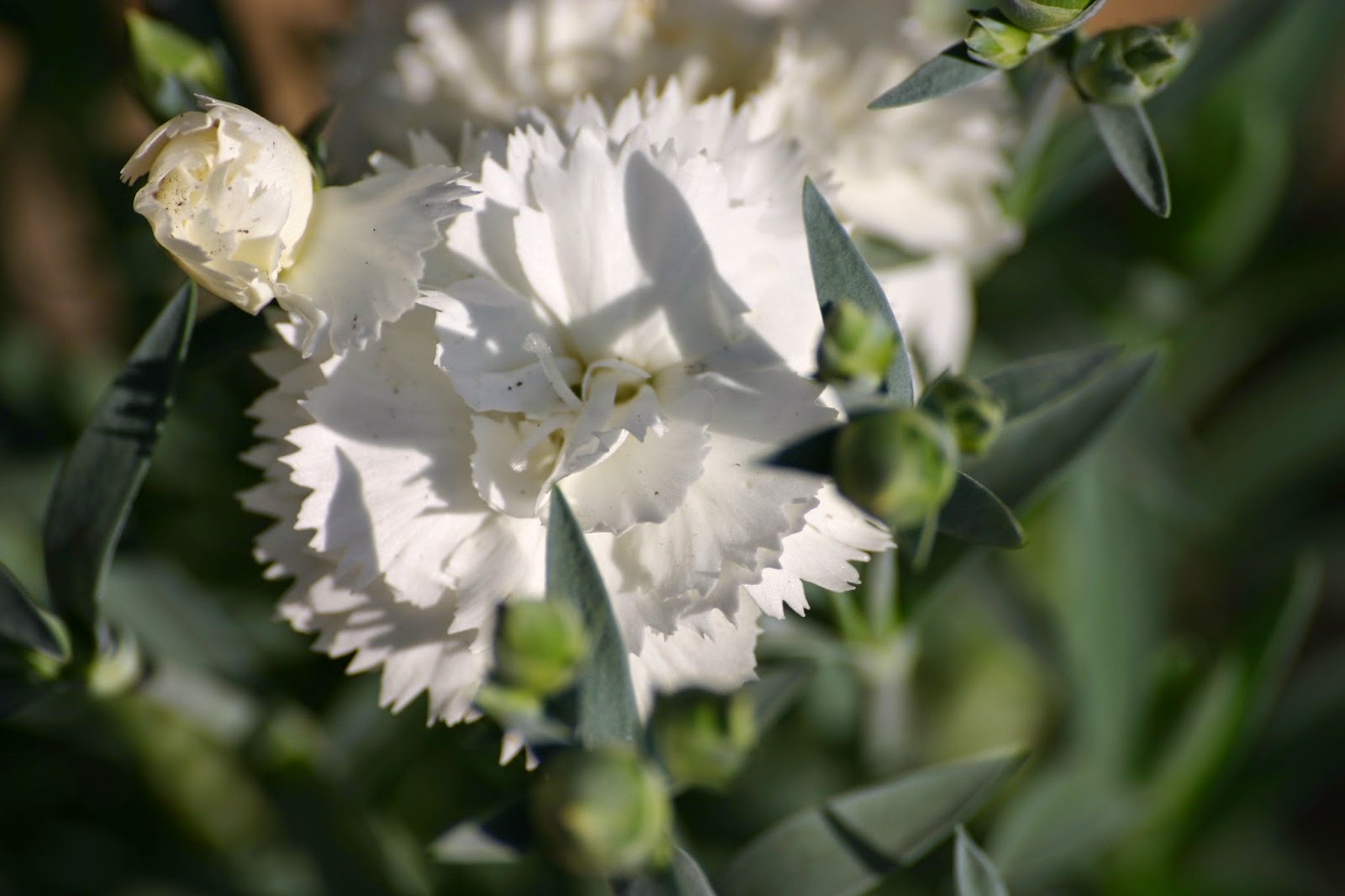 As previous posts have detailed, I am buying a plant every month to ensure that I have all year round colour in my garden. This was suggested by the late, great Geoff Hamilton, and it is a great idea. I am trying to go beyond my own personal comfort zone a little, by ensuring that I purchase a plant I have had little previous experience of. It is a great opportunity to buy things which I would not normally buy. 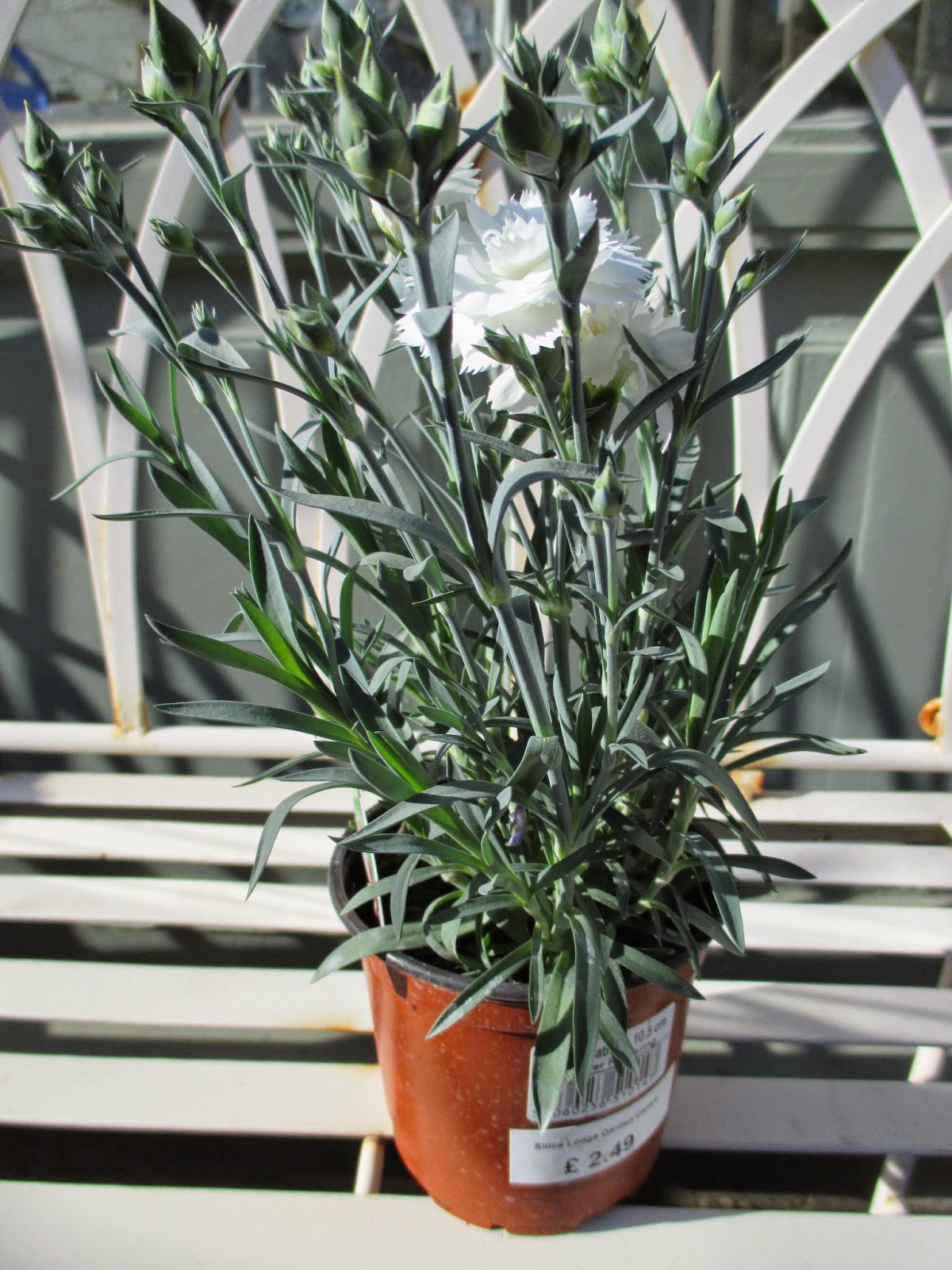 In the early months of the year there was, unsurprisingly, less choice, as there were less plants in flower to choose from. This month it was quite overwhelming, and there was endless choice and variety. I had some plants in my hand which I had to put down again. I REALLY wanted a blood red Erysimum, and coveted it quite badly! They are some of my favourite plants and I have lots in the garden anyway, so it would have felt like cheating! I also picked up a clematis, but the same applies ! 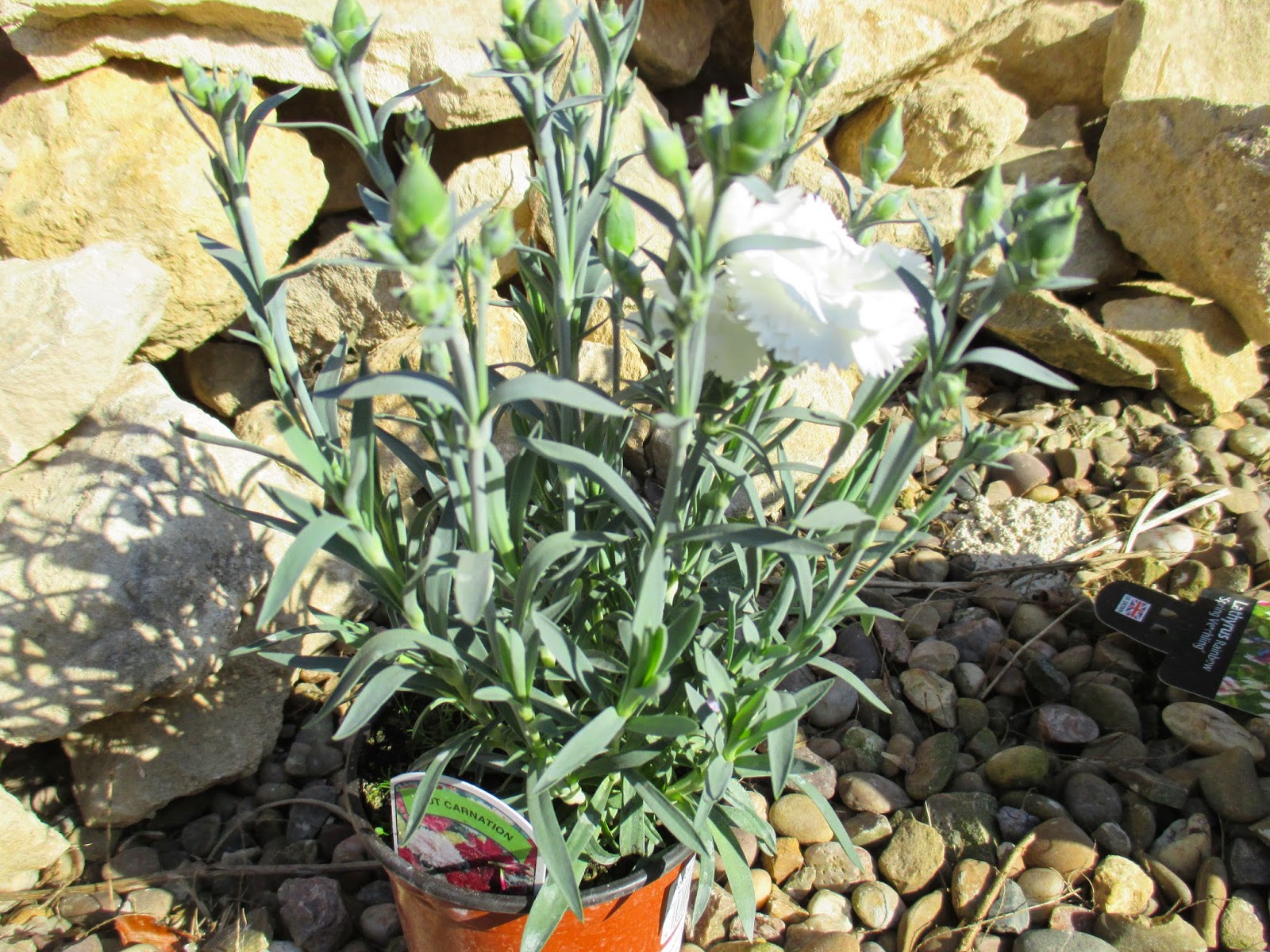 I had limited time to look around, which was perhaps a good thing, as it crystallised the mind somewhat. In the end I went for ... a Carnation! A plant I hate, loathe and detest above all others! But this is an exercise to push me out of my comfort zone, so I decided to go for it. Hopefully I will learn to love it, and find things that I like about it. All the carnations were inside a greenhouse, at the nursery, which led me to wonder about their hardiness but when I researched it, I found out that they are fully hardy, so I don't know why they were under cover.

The first thing I noticed as I moved towards them was the perfume which filled the air. Smells can trigger memories faster and more intensely than anything else, and one whiff of those carnations and I was five years old again, playing in my grandfather's sunny garden, while the adults drank tea inside the house. I could almost feel the warmth of that long ago sun on my back. 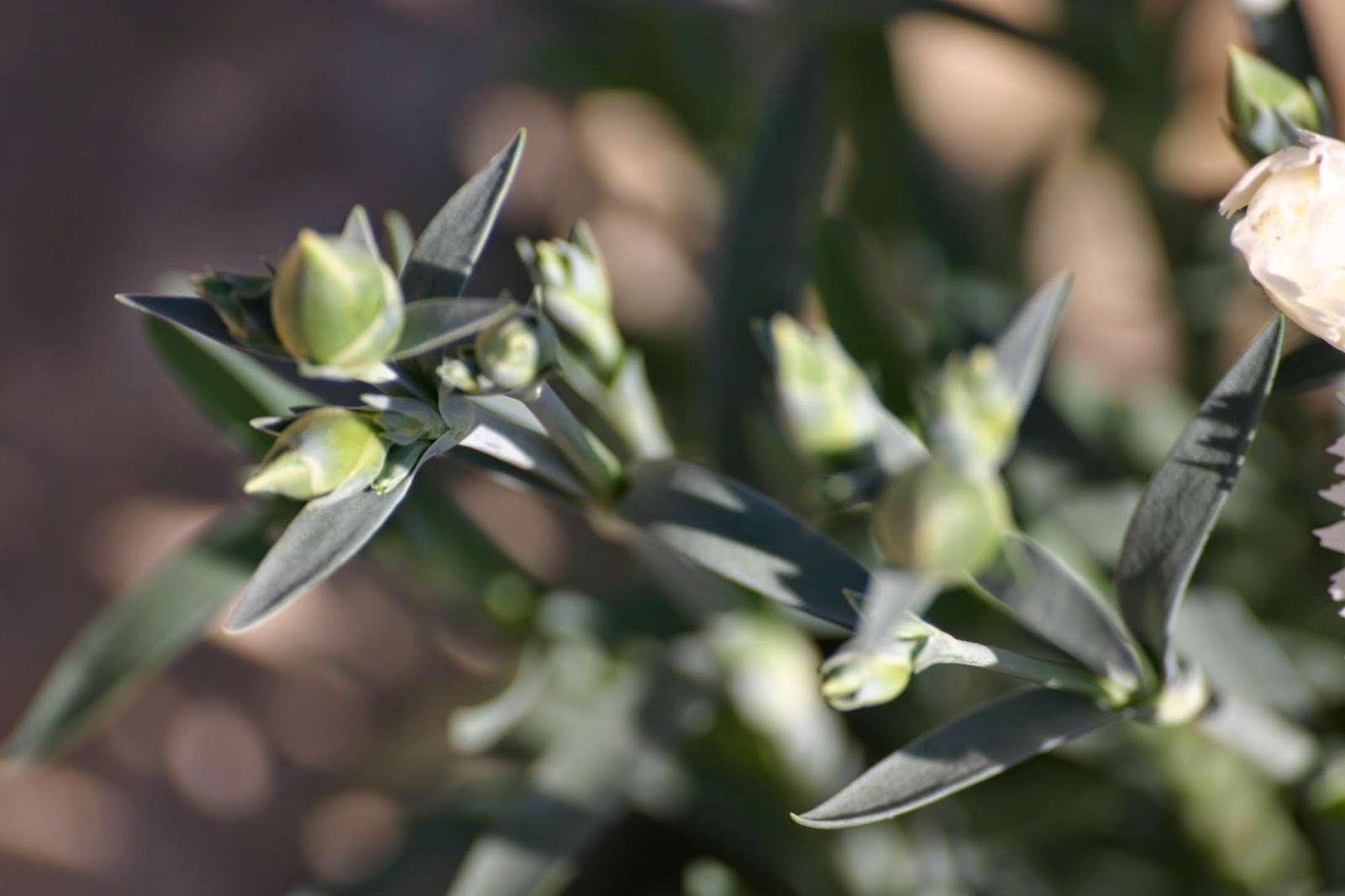 There was a choice of  three colours in the nursery - a striped raspberry pink and white; a solid shell pink; and the one I finally chose, a pure white. All had soft grey foliage with narrow spear shaped leaves. The stems were rather stiff and formal, and  jointed, like arthritic old women. They are a plant with little natural grace and fluidity, and remind me to a certain extent of Auriculas, in that they both have the same formality and lack of grace. The habit of the carnation is a stiffly upright plant with comparatively large flowers borne at the top of the stems.

My personal reaction to Carnations is to find them faintly depressing, because I think they conjure up the grimmer aspects of the late 1950's and early 60's. I was very small then (honest!) but I think they evoke long hidden memories of this time in me, when austerity ruled the day. 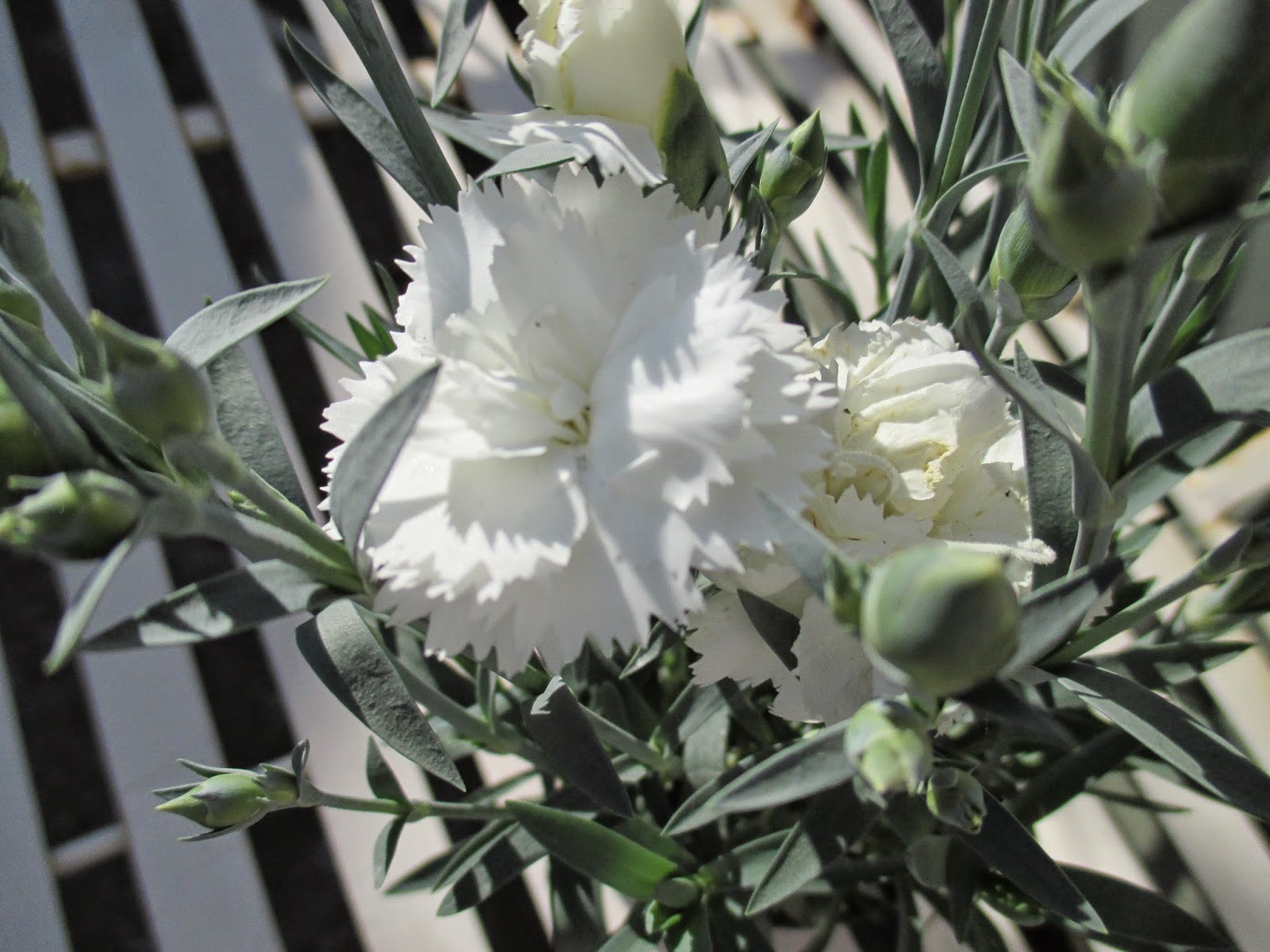 Apparently, there are several types of Carnation - annual, border and perpetual - flowering. Their Latin name is Dianthus, which was bestowed upon them by the Greek botanist Theopharastus, who took the  Greek words 'Dios'  (God) and 'anthos' (flowers), so that there name literally means 'Flower of the Gods'.

They need several hours of full sun every day, and like to be kept moist, although they do not appreciate over - watering. They prefer deep, friable sandy loam - so they may have a shock moving in with me ! They need to be fed, dead headed and watered regularly if they are to keep producing flowers.

My new best friend should grow to around 30 cm in height, with a similar spread.

I will try to learn to love them, but there are no waves of warmth towards them at the moment ...