The other day I received an email from Thompson and Morgan asking me to trial a new rose for them, as they know how much I love a good rose ! The only proviso was that I write an unbiased blog post about it. "Was I interested ?" they asked. Was I ? Do bears pooh in the woods ? I answered in the affirmative, immediately ... and the parcel came today ! 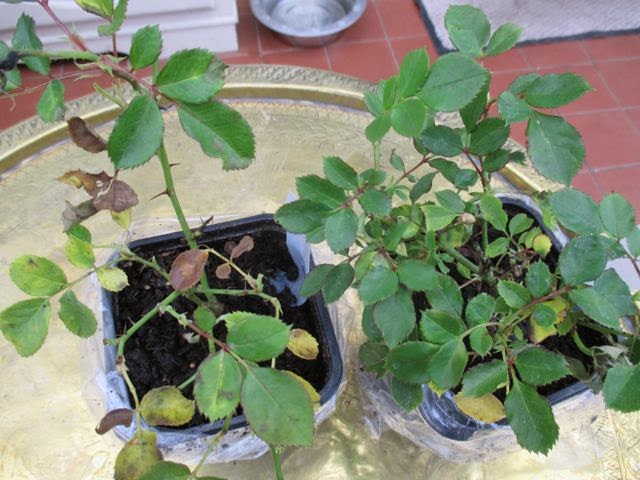 Being asked to trial a plant is both a joy and a responsibility. It focuses the mind on the task of looking after it as well as is humanly possible, to give it the best chance of achieving its potential. There is also excitement at growing something new... especially a new rose.

When I opened the parcel there were actually 2 roses inside, one in better shape than the other, as far as the foliage was concerned, but I'm sure that difference will soon be rectified by a few days of tlc, as it was no doubt caused by being packaged, without light, for several days.

On first sight, the roses were smaller than I had expected them to be, but when I checked the T & M catalogue, it specifies that they are supplied in 9cm pots, which they were, so my expectations were clearly unrealistic.

I saw a similar rose, ( 'Blue Eyes'?) when I visited the Thompson & Morgan Trial grounds in August this year, and was told that their new rose, 'Sweet Spot Calypso' is even better than that one. 'Blue Eyes' looked good to me, compact, with no black spot, and some flowers on it. 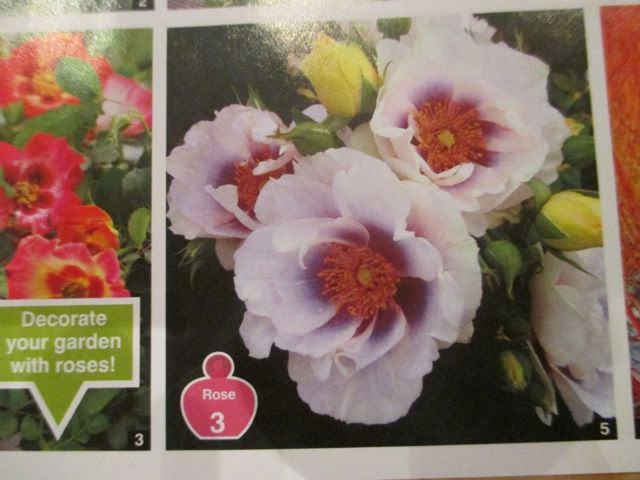 The rose I am trialling, ('Sweet spot Calypso') is termed a 'Decorator' rose, and it will  bloom continuously from June to October. It is low growing and compact, with a height and spread of about 50cm. It can be used as bedding, in containers, borders or ground cover, and is 'self cleaning' in that it sheds old petals. Although that would keep it looking tidy, I guess that it still needs deadheading with secateurs, otherwise it would develop hips and stop flowering. Pruning is nothing like as complicated as it is for many other roses - apparently just a light shaping and shearing is all that is required. 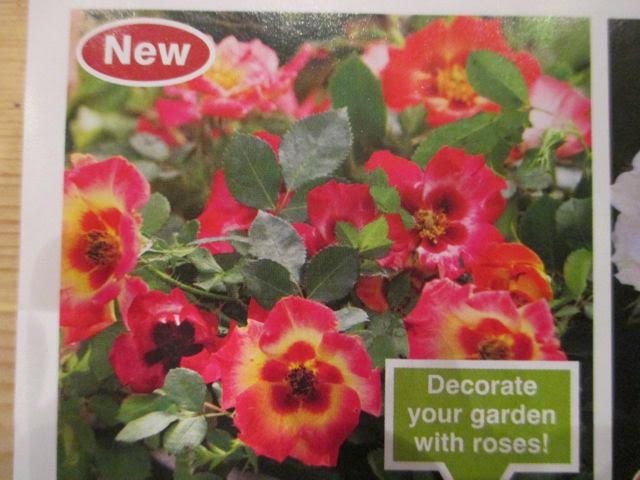 The flowers are 5 petalled singles, and are quite unusual, in that there is a darker eye in the centre which is red, this is surrounded by a ring of yellow, and then each petal is tipped with pink. There is a technicolour thing going on though, as the colours change as the bloom ages, so that there are many different shades at any one time. The foliage is dark green and new shoots are, pleasingly, red. The flowers are quite atypical for a rose, and I imagine that, to some people, it would not conform to the expected flower type and colouring.

The flowers remind me of 'Alissar, Princess of Phoenicia', although it is not related, to my knowledge. This is a lovely rose, and those single, dark-eyed flowers give me a lot of pleasure. It is a repeat flowerer, although it likes to 'rest' for long periods in between flushes of blooms. 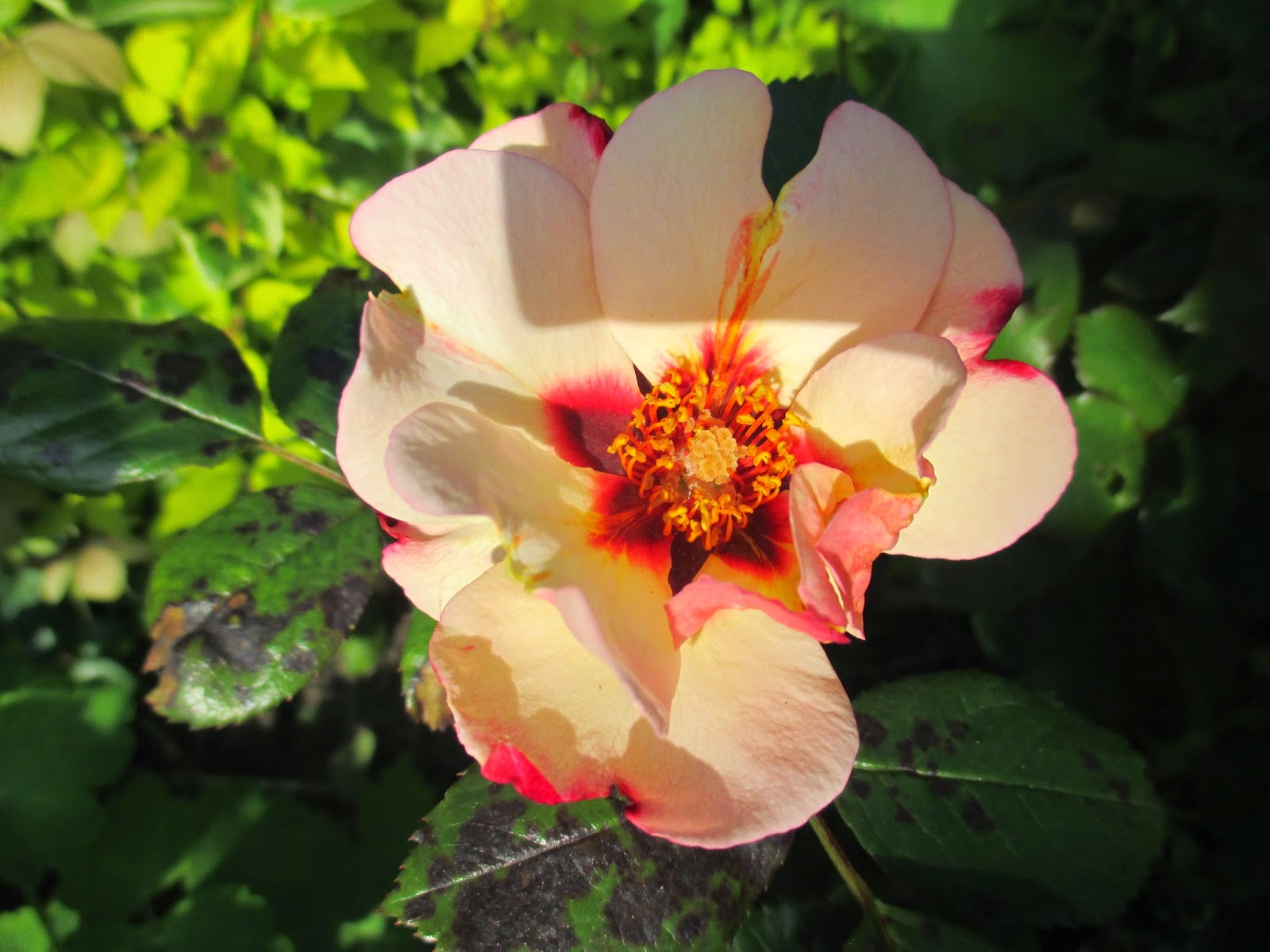 'Sweet Spot Calypso', the Decorator rose, supposedly heralds a new breed of roses, with a long period of non stop blooms. It was bred from two unnamed Rosa hybrid seedlings, in Holland, and has taken 20 years to produce. Hardiness is given as Zone 5, which is around minus 20 centigrade, so no worries there, as much of Britain is Zone 8.

I must admit to not being keen on the term 'Decorator' rose as it smacks of buying books by the yard, or using artificial turf, or just doing stuff because it is easy on the eye, from a distance. It somehow implies that the plant itself is unimportant, and that the overall impression is paramount. I don't know how else to interpret the term, but I won't let it put me off the rose itself. 'A rose by any other name would smell as sweet' ... except that this one has no fragrance. To some that would be a deal breaker, as roses  are often chosen for their fragrance. Although I love scent, I have plenty of fragrant roses in the garden that I can bury my nose in whenever I feel the urge. 'Jude the Obscure' has fragrance to share, as does 'Wollerton Old Hall', so I won't begrudge  'Sweet Spot Calypso' for being scent free. 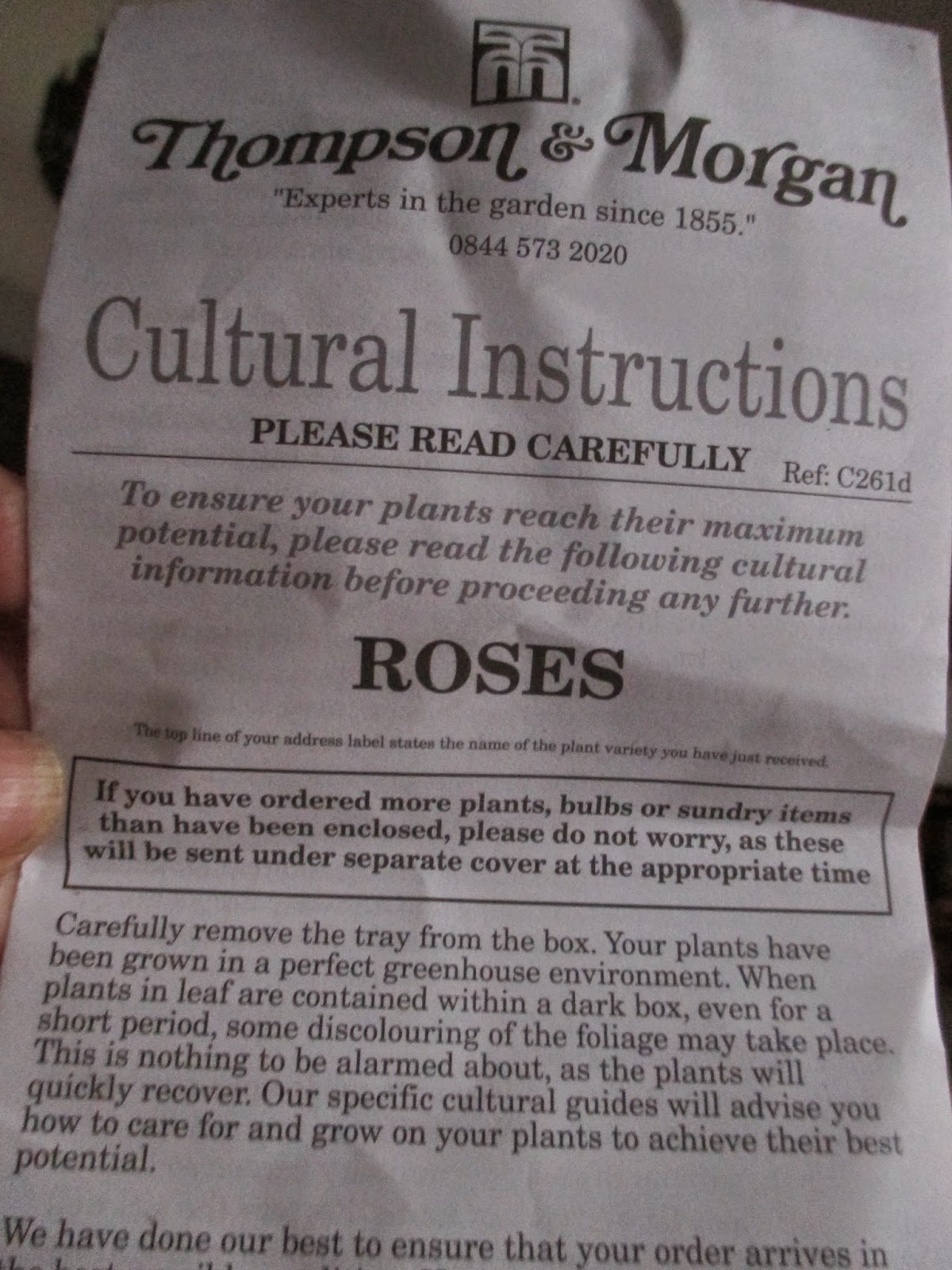 The roses came complete with a set of written instructions which were clear, concise and informative.


So, having two little roses to trial, gave me more opportunities than one so I devised a cunning plan! I  planted one in a container and put it in a reasonably sheltered place, for its first winter. The other I  planted out in a bed, ensuring it has full sun, and breathing space around it. In that way, it will be interesting to compare growth, flowering, health and vigour. The trial has to be honest and unbiased, and to do this fairly, I have to ensure that the roses are given the best possible chance to succeed in normal garden conditions.

I planted the container rose in a suitably sized pot - not too big and not too small, and put a slow release rose fertiliser at the roots and used a good, more or less peat-free compost. As it needs a little tlc and nurturing, I have decided to leave it in the cool greenhouse for a couple of weeks to give it chance to recover. If the days are warm I shall move it outside, and bring it back inside at night.

I put the larger, more vigorous rose in the border, as I felt that it would cope better with the conditions than the smaller one, which will get more nurturing in a pot, having no competition for space, light and nutrients. 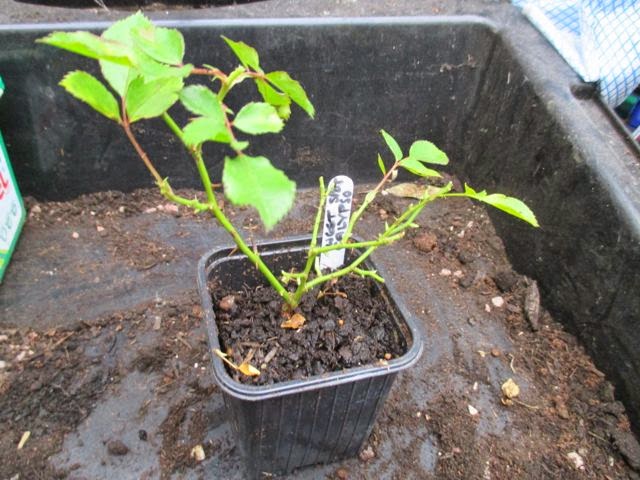 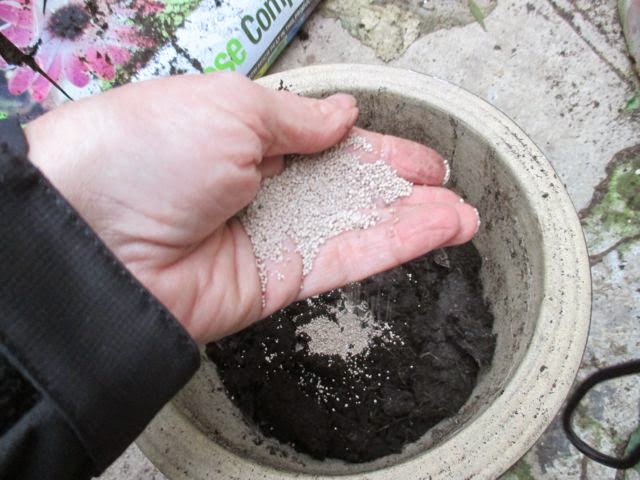 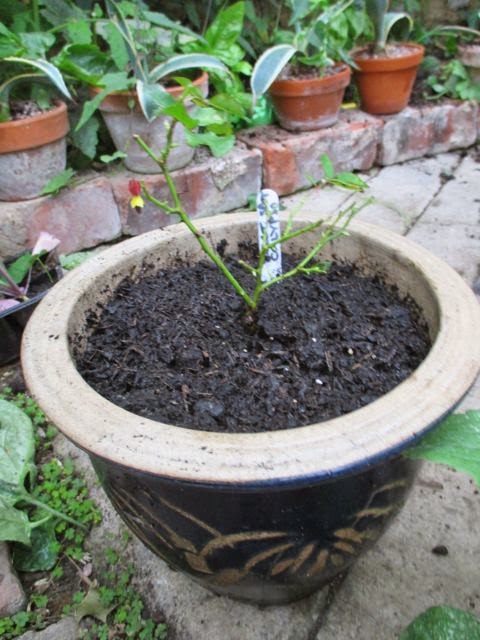 The rose in the bed was planted into a comparatively large hole, with fertiliser at the base, filled up with more or less peat- free compost. Both will be kept well watered. 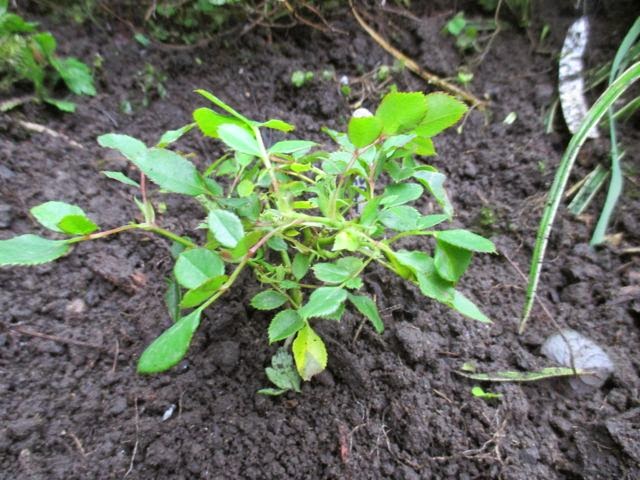 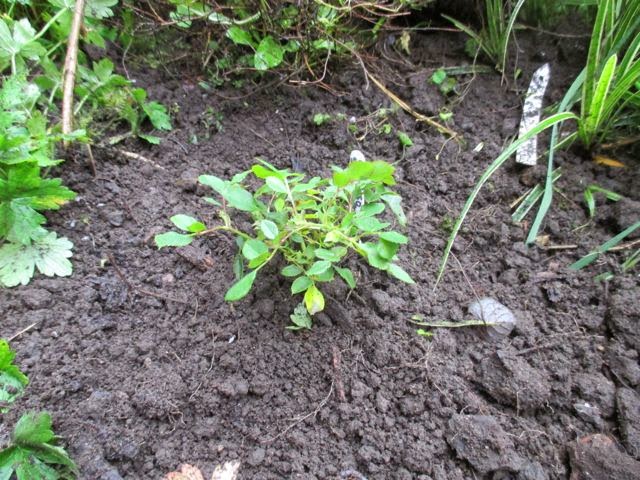 As I try to garden organically wherever possible (never say never!) these roses will not be sprayed with anything, and any problems will hopefully be detected early so that they can be dealt with before they get worse. I will monitor them carefully to pick up any early signs of disease or pest infestation etc.

I am looking forward to seeing how they grow and develop, particularly as they are being grown in different conditions. I can't wait for that first rosebud to open next season ...